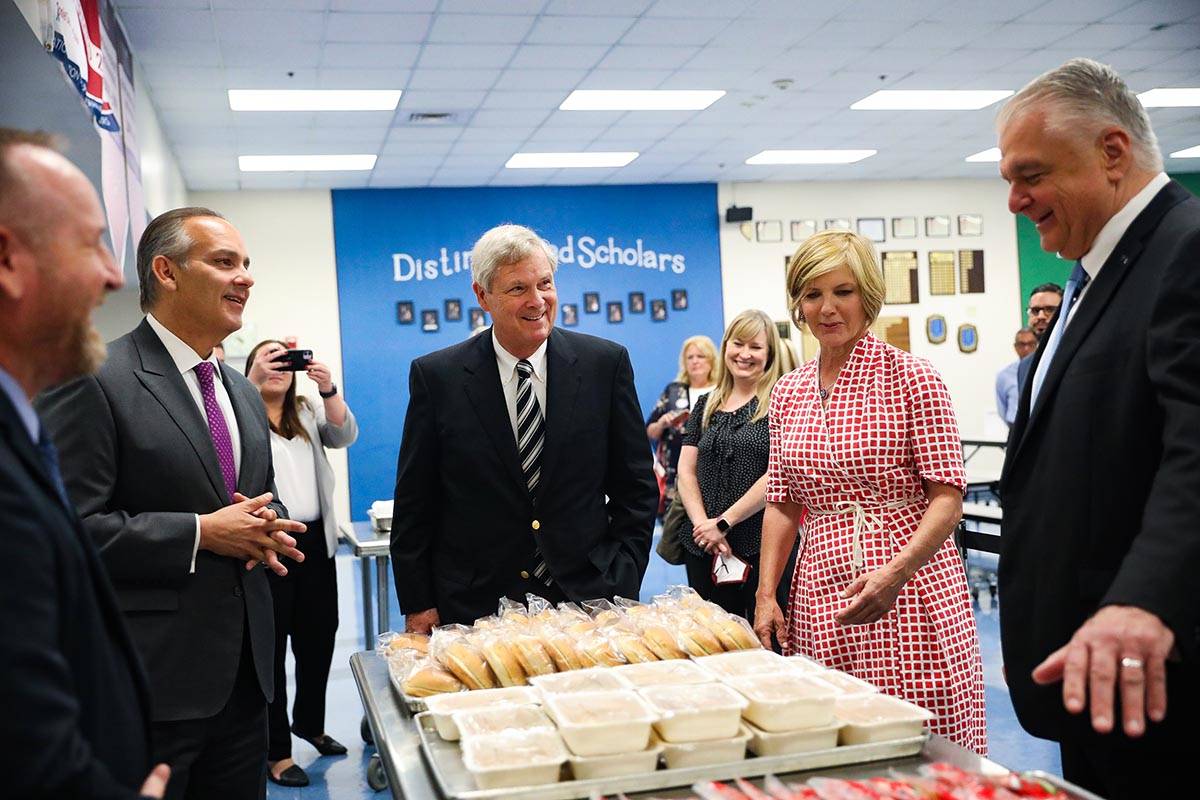 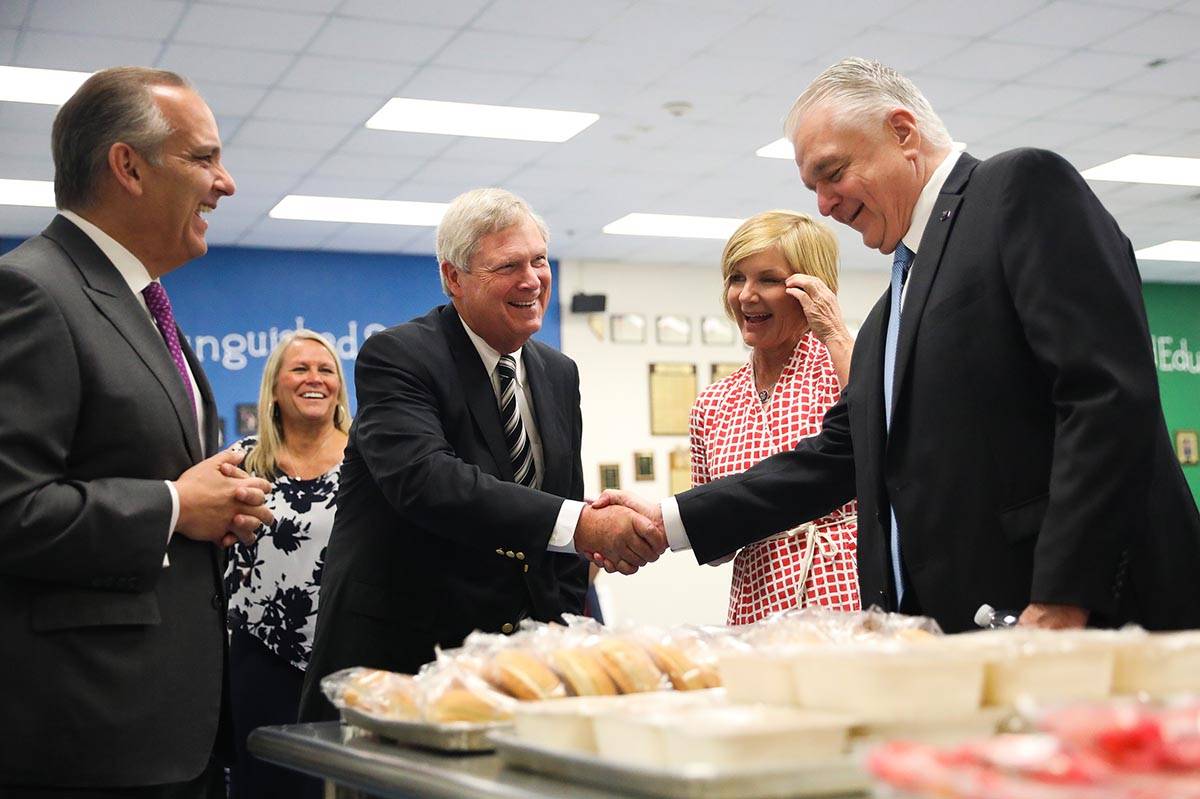 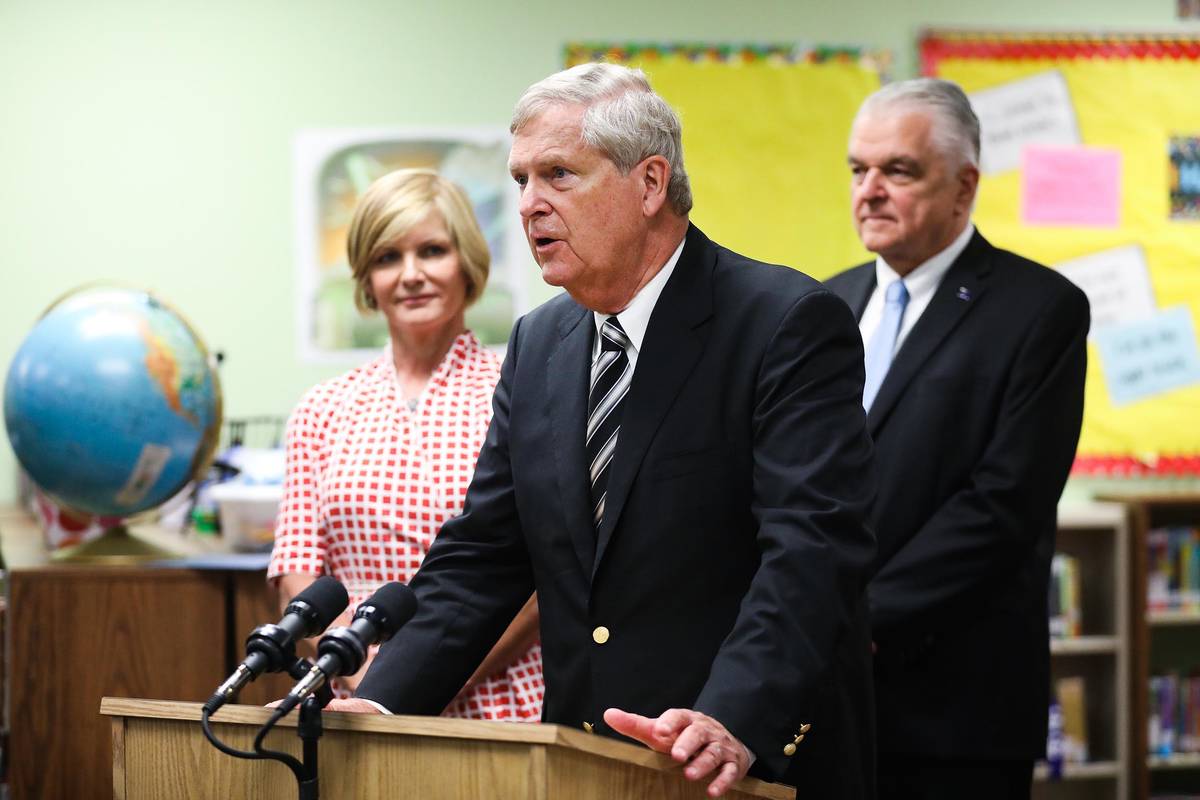 Agriculture Secretary Tom Vilsack addresses the media next to Rep. Susie Lee, D-Nev., left, and Gov. Steve Sisolak, right, after they toured Estes McDoniel Elementary on Thursday, July 8, 2021 in Henderson. Vilsack was in town to promote the American Families Plan that will further the efforts to end food insecurity for children and to highlight the work already done in Clark County schools. (Rachel Aston/Las Vegas Review-Journal) @rookie__rae 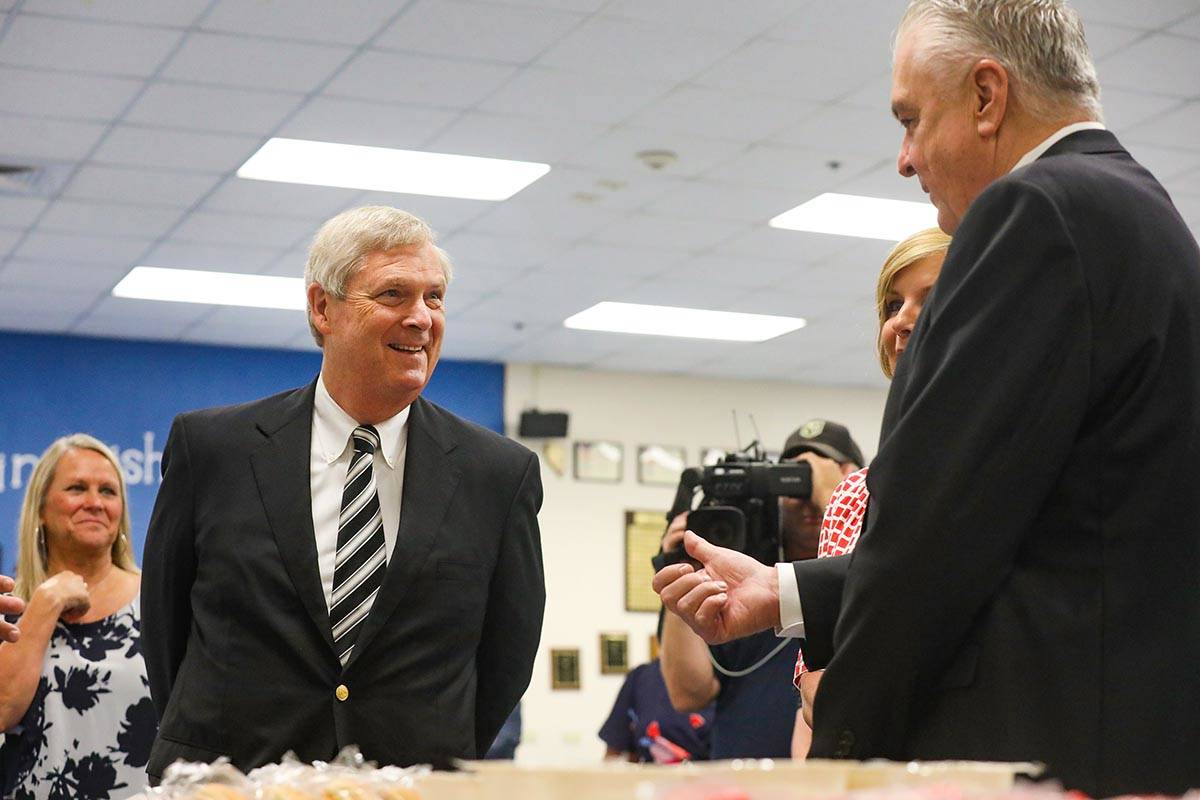 Agriculture Secretary Tom Vilsack, left, talks with Gov. Steve Sisolak, right, as they tour Estes McDoniel Elementary on Thursday, July 8, 2021 in Henderson. Vilsack was in town to promote the American Families Plan that will further the efforts to end food insecurity for children and to highlight the work already done in Clark County schools. (Rachel Aston/Las Vegas Review-Journal) @rookie__rae

The trio of Democratic politicians praised McDoniel and the Clark County School District for providing millions of meals to students during the pandemic, in part through U.S. Agriculture Department and federal programs.

On Thursday, the McDoniel students were served a chicken sandwich, potato wedges, apple slices, carrots and a choice of regular or chocolate milk, with the latter beverage choice earning high praise from Sisolak as he spoke to the young children as they entered their cafeteria.

“We all know that education is the key to opportunity,” Lee said during the news conference, held in the school’s library as the students ate across the hall. “And we as a country need to focus on if we’re going to set students up for success, we have to focus on food security. When kids are hungry, when they’re worried about their next meal, they fall behind academically.”

Lee and Vilsack attributed recent success in providing services to those in need to the American Rescue Plan, the Biden administration and Congress’ latest stimulus package. Both also stressed the need for Biden’s infrastructure and family plans, two mammoth bill proposals currently under discussion in Congress, to keep services flowing beyond the pandemic and fight against hunger, climate change, education cuts and various other national ills.

“(Biden’s American Families Plan) will double down on our efforts to get nutrition into the hands of students, which they need to succeed in school,” Lee said. “And a key piece of that will include $17 billion meals for children in the highest poverty school districts.”

Lee has backed a more modest bipartisan infrastructure deal in recent weeks, and she said Thursday the Families Plan proposal would likely go through similar negotiations once the infrastructure deal is done. Nevada, she said, is poised to benefit more than any other state from both plans, as the state was hit hardest during the pandemic.

Vilsack further pushed the importance of the Families Plan, noting that it could one day provide free community college to the students of McDoniel and the school district, as well as child care tax credits for their parents and universal preschool for their siblings.