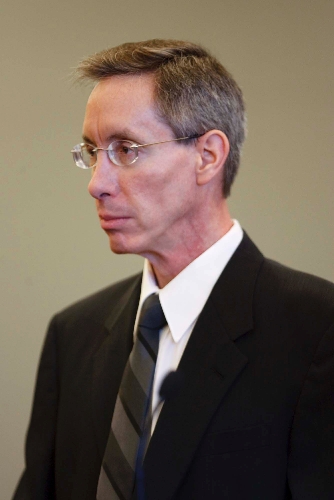 SALT LAKE CITY — Polygamous sect leader Warren Jeffs on Tuesday refused to sign a waiver that would have allowed his extradition to Texas, where he faces bigamy, aggravated sexual assault and assault charges involving underage girls at a church ranch.

Jeffs attended the short hearing in a West Jordan courtroom where he refused a waiver of extradition from Utah. Jeffs also refused in June, when Texas authorities brought a similar warrant to the Utah State Prison, where he is incarcerated.

The Utah and Texas governors have signed extradition warrants, setting up a legal mechanism for Jeffs’ transfer.

Jeffs, 54, is the ecclesiastical head of the Fundamentalist Church of Jesus Christ of Latter Day Saints. The southern Utah-based church practices polygamy in arranged marriages that have involved underage girls.

Jeffs’ defense attorney, Walter Bugden, said his client was not trying to avoid facing the Texas charges, but wants a speedy trial in Utah first.

In Utah’s Washington County, Jeffs is facing a possible retrial on two counts of rape as an accomplice. The Utah Supreme Court recently overturned his 2007 conviction, ruling that faulty jury instructions denied Jeffs a fair trial and that state attorneys misapplied accomplice liability law in the case.

“The reality of the situation is that if he is sent to Texas now, he won’t come back to Utah to face a possible retrial on the Utah charges for several years,” Bugden said after the hearing. “Utah filed first.”

Bugden will make those arguments before a judge at a Nov. 15 hearing.

Washington County Attorney Brock Belnap has said his office has not decided whether it will retry the case.

Assistant Utah Attorney General Craig Barlow said Jeffs’ refusal to go willingly to Texas was no surprise. Barlow said the state believes extradition can only be challenged if there are questions about a defendant’s identity and the sufficiency of criminal charges can be used as grounds to challenge extradition.

“We do not believe a retrial is necessary before he can go to Texas,” Barlow said.

Utah Attorney General Mark Shurtleff has said he would not retry the case until after Texas authorities get a chance to prosecute Jeffs. Shurtleff has asked the Utah court for a rehearing and a clarification on proper jury instruction.

The Texas charges stem from church and family records seized by authorities during a raid on the Yearning for Zion Ranch in April 2008.

Jeffs remains incarcerated despite his overturned conviction. In addition to the charges in Texas, he faces federal charges of being a fugitive from justice.

Bugden said the “unlawful” warrants violate Jeffs’ constitutional right to a speedy trial and suggested that Utah officials who prosecuted Jeffs are trying to quickly cut their losses.

“The state of Utah is losing, so what do they want to do? They want to send him off to Texas. ‘Let’s let Mr. Jeffs be Texas’ problem,’ ” Bugden said.

About a dozen of Jeffs’ followers, all men,– attended the Tuesday hearing, which lasted about five minutes. As is customary, church members stood as a sign of respect when Jeffs was escorted into the room by security officers from the court and the state prison.

Raiders’ Josh Jacobs on Pro Bowl: ‘This (expletive) is stupid’