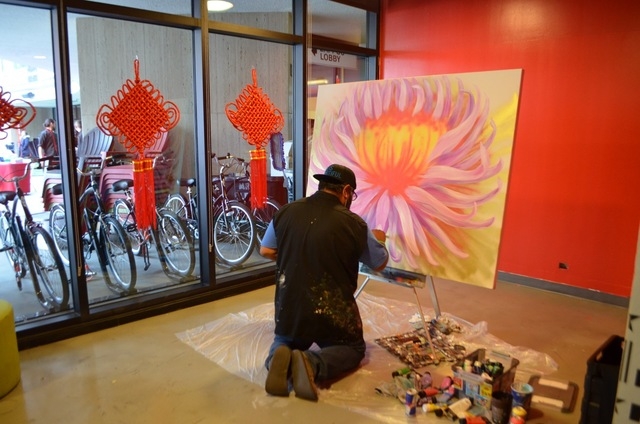 Miguel Hernandez, the full-time resident artist for Zappos, works on a pieces inside the company's downtown Las Vegas headquarters. Ginger Meurer/Special to View 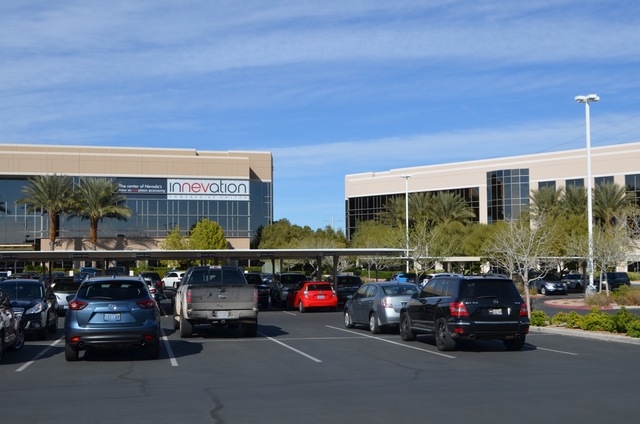 The Switch Innevation Center, 6795 S. Edmond St., is a collaborative workspace donated to the community by Switch founder Rob Roy. It has hosted more than 2,000 free events for more than 42,000 people. Ginger Meurer/Special to View

Southern Nevadans just lived through a once-in-a-lifetime recession. Although it’s unlikely the next dip is going to be as dramatic as 2008, there’s little doubt it’s coming.

Stephen M. Miller, professor and director of the Center for Business and Economic Research at the University of Nevada, Las Vegas, said it could already be on the way.

Southern Nevadans have been slow to feel it, but the recovery started in July 2009. Since the 1970s, the average time between financial crashes has been roughly seven years. Those seven years are almost up.

Part of the reason the last recession was so devastating was a reliance on the area’s predominant industry, tourism. Miller said Southern Nevada’s employment is roughly 30 percent tourism, about 17 percentage points above the national average.

Other industries in the top 20 not tied to tourism in 2014 included the UNLV, the Metropolitan Police Department, University Medical Center, Southwest Airlines, the city of Las Vegas, and Sunrise Hospital & Medical Center.

“The only things that have to occur are taxes and death,” Miller said. “So, tax accounting and funeral parlors tend to be recession-proof. However, they’re not a big enough part of the economy that you can put your hat on that.”

Most, including Miller, agree that the stability key is to diversify Southern Nevada’s economy with enough different industries that if any one is struggling, the others can help the region ride the storm.

In Southern Nevada, the Las Vegas Global Economic Alliance, a partnership of civic, educational and industry leaders, has been charged with proactively seeking out companies that can be wooed by the competitive advantages in Southern Nevada.

The region has a lot going for it, from a major airport with easy accessibility to an agreeable climate. Jonas R. Peterson, the alliance’s president and CEO, said it also helps that companies are able to keep costs down, and employees report a higher quality of life

“Our quality is higher, our costs are lower — that’s going to continue to drive business development,” he said.

“Even after the commerce tax, we are the only state in the Southwest that enjoys a top 10 overall tax rating from the American Tax Foundation,” he added. Combine that with “42 million tourists who are clients for many of our companies — they come to us rather than the other way around.”

Another facet of the alliance’s mission is to grow the region’s existing companies and create competitive advantages for what Peterson calls “the next generation of industries to grow,” such as information technology, logistics and distribution, unmanned systems, and advanced mobility.

“Now is not the time to be complacent,” he said. “Now is the time to do even more and get ahead of that next recession while we have the opportunity.”

Peterson’s team is not alone in trying to prepare us for the future. Southern Nevada Strong, a project with input from local government leaders, schools and others, has worked to create the Southern Nevada Strong Regional Plan, which identifies strategies to integrate reliable transportation, quality housing for all income levels and job opportunities throughout the region.

Henderson Councilwoman and Southern Nevada Strong Steering Committee Chairwoman Debra March said via email that the organization has embarked on a broad effort to engage the public, collaborate and develop a vision for future development.

“We were among a select few communities in the United States chosen to seek a course for economic recovery through improved regional coordination,” she said.

Through the project’s studies, it found that Southern Nevadans had two top priorities: the need for a variety of well-paying jobs, and high-quality public education.

“Based on that input, the first theme of the Southern Nevada Strong Regional Plan is to improve economic competitiveness and education,” March said.

Peterson said education and its responsiveness to business needs is vital to economic growth.

He said that when Sutherland Global Services was looking at selecting a site in Southern Nevada, they were looking for an education partner to help create an earn-while-you-learn program.

“A variety of our higher education partners stepped up. (College of Southern Nevada) in particular now is working with them on that robust internship program,” Peterson said. “And because our education partners stepped up, we were able to win that project, 2,000 jobs to our market. A building that was vacant now is occupied. Great things happened.”

“In higher education, we have such an incredible relationship … We have been able to work with them to really address what our long-term needs are and very, very quickly develop the programs that we need for our future workforce. It’s an incredible tool. You talk about diversifying our economy, but if you don’t have the workforce to do it, you’ll run into long-term problems. That’s not going to be our issue in Nevada because Nevada is being very, very progressive about quickly reacting to the needs of the community and helping to develop a workforce.”

Kramer said Nevada has been great for Switch, as it is close enough to Los Angeles in the south and San Francisco in the north to allow quick commutes for customers, but far enough away to avoid natural disasters and higher tax rates. He added that Switch also has been good for Nevada, offering more than 2,000 free events for more than 42,000 people in the Innevation Center, a collaborative workspace donated to the community by Switch founder Rob Roy.

Kramer said that 6,000 people work inside the Switch ecosystem, most employed by clients. About 35 percent are local while 65 percent commute on a regular basis, staying in hotels, eating in restaurants, “and helping to continue to put Nevada on the map as the local leader for tech infrastructure.”

“We have more than 1,000 clients in our ecosystem, and when they come see the highest-ranked data center in the world in Nevada, that helps spread the message,” he said. “Our entire team, starting with our CEO, with Rob, down through all of our employees are all preaching the message about what a great state Nevada is for technology.”

Online retailer Zappos is another ambassador for Southern Nevada economic diversity. Brian Paco Alvarez, the company’s art curator and historian, said its move to downtown Las Vegas has been a game changer for the city.

“We have over 20,000 people a year who come to Zappos just to visit, to take a tour of our campus,” Alvarez said. “You’re talking about people who will pay $10 to come tour and see how people work. Because they want to see who we are as a company. They want to see our culture because our main business strategy is our culture.”

Aside from efforts to diversify the state, there’s plenty individuals can do to prepare themselves for the next financial downturn.

Doris Ostrander, director of continuing education for the UNLV Division of Educational Outreach, said even people who are employed and happy in their career can develop new skills to stay current.

“If your employer has to make a hard choice about who to keep around, the person who is bringing new skills, who is working hard to keep up, is probably going to look a little more attractive, and they’re also going to be in a better position should they unfortunately get laid off and need to look for another job,” she said.

Ostrander said the trend is turning toward portfolio careers. “Millennials are expected to hold say 20 jobs over the course of a lifetime spanning a range of industries and sectors and functions. Therefore nondegree credentials, or credentials up on top of the degree they have already, become really important.”

David Hehn, financial adviser and retirement investment instructor for UNLV’s Continuing Education program, said that while people are like snowflakes, and every one of them is different, there are a few key financial truths that are universal. No. 1 is to have enough savings to tide you over at least six months, preferably a year.

“The number of average Americans who could come up with $2,000 for a car repair is absolutely tiny,” he said.

“Take a couple that is making $75,000 — not a high lifestyle in today’s economy,” he said. “Those folks, if they enter into retirement and they have 20 years more to live, they need over $1 million in retirement to continue a $75,000 lifestyle. It’s amazing how far the money doesn’t go when you factor in inflation and taxes.”