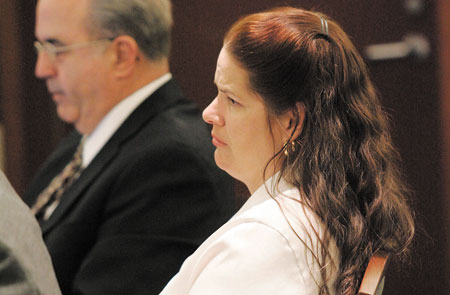 The woman accused of causing a fatal head injury to her 7-month-old foster son in 2006 was convicted of first-degree murder late Thursday night.

A Clark County jury of nine women and three men deliberated for more than four hours before returning a guilty verdict against Melanie Ochs in the death of Baby Boy Charles.

The family of Baby Boy Charles attended the reading of the verdict and could be heard sobbing in the background. Ochs, who was taken into custody after the verdict was read, faces a minimum of 20 years and a maximum of life in prison. A sentencing date was set for Jan. 28.

The trial, which lasted nearly two weeks, presented jurors with contradictory testimony from medical experts and graphic photos and details from the baby’s autopsy.

Ochs also testified on her own behalf. She admitted that when she first reported the baby’s injuries to authorities, she concocted a story that fixed blame on her older children.

On Tuesday, she told the jury that Baby Boy Charles suffered a head injury after he fell from the top of the washing machine to the floor of her home, near Sahara Avenue and Fort Apache Road.

Prosecutors have maintained that a fall such as the one Ochs described would not have killed the infant. Authorities contended that some type of abuse was involved.

The baby suffered a skull fracture and swelling of the brain. Doctors who treated him found a high likelihood of nonaccidental trauma to be the cause of the injuries.

Ochs said the injuries to her foster son were an accident, which happened after she left him alone on top of the washing machine to check on her two other children in a bathroom. Ochs said she was gone for about 30 seconds. She heard a thud and came back to find the baby on the floor.

During the trial, prosecutors called four physicians who testified that Baby Boy Charles had suffered two separate traumatic injuries to his head. They each agreed that a single fall might explain one of the injuries but not the other.

The physicians also testified that the fall from a washing machine, a drop of about three feet, was unlikely to cause the severe kind of fracture sustained by Baby Boy Charles.

The defense also called medical experts who testified that the kind of fall described by Ochs could indeed fatally injure a baby.

During closing arguments Thursday afternoon, prosecutor Vicki Monroe said nobody but Ochs will ever know what caused the injures to Baby Boy Charles, but she cautioned the jury against believing the defendant’s testimony.

“She’s hiding something. She doesn’t want to tell you what she did to that baby that caused those injuries,” Monroe said. Monroe suggested the two injuries suffered by Baby Boy Charles could have been caused by a blow to one side of his head, which caused the other side of his head to slam into a wall.

Ochs’ attorney, Robert Langford, told the jury that while Ochs originally lied to authorities, she told them the truth. Langford said Ochs had no history of child abuse. He also said the state never proved she committed such an act. “The doctors should be ashamed of themselves,” Langford said after the verdict was announced, referring to the medical experts who testified for the prosecution.

Langford had argued during trial that the science regarding short falls of the type described by Ochs is changing.

“This was a tragic accident,” Langford said. “Shame on the system.”