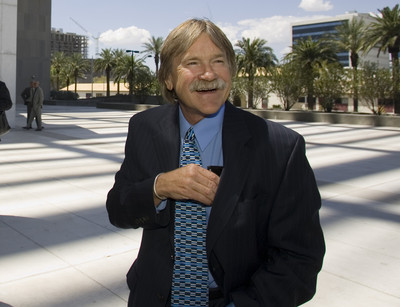 A letter and maps from the U.S. Geological Survey obtained last week by the Review-Journal show that the Bow Ridge fault passes directly beneath the footprint of a pad where spent fuel canisters would age or cool down before they are entombed in a maze of tunnels inside the mountain, 100 miles northwest of Las Vegas.

Rock core samples extracted by drill rigs about 250 feet below the surface indicate that the fault is hundreds of feet east of where scientists had thought it was.

That means designers either must revamp their plans or show regulators that the so-called aging pad, and possibly nearby buildings where nuclear waste would be handled, can be fortified enough to withstand an offset of the rock layers beneath them, said Bob Loux, executive director of the Nevada Agency for Nuclear Projects.

The agency for two decades has been reviewing scientific work and plans for the Yucca Mountain repository. Loux has been an outspoken critic of the Department of Energy project.

“It certainly looks like DOE has encountered a surprise out there, and it certainly speaks to the fact they haven’t done the technical work they should have done years ago,” Loux said Friday in a telephone interview from Carson City.

“It’s going to have to cause some change of the design in the final analysis,” Loux said. “It’s going to impact the safety case.”

In the meantime, the DOE had proceeded with the first phase of bore hole work but agreed to stop using the state’s water for the second phase, which was in progress until Sept. 6.

The bore holes that were completed, however, might bolster the state’s arguments that the site is not safe because of looming earthquake hazards. Other potential natural threats include floods and volcanic activity. The mountain itself is a volcanic-rock ridge formed about 13 million years ago by ash deposited by a nearby volcanic eruption.

A May 21 letter from Kenneth Skipper, chief of the U.S. Geological Survey’s Yucca Mountain Project Branch, to Andrew Orrell, senior program manager for DOE’s lead laboratory, said: “Preliminary data from the recent drilling phase indicate the location of the Bow Ridge fault in northern Midway Valley may be farther east than projected from previous work in the area.”

Skipper’s letter goes on to say: “Originally, it was thought that the Bow Ridge fault was west of the proposed aging pads; however, these preliminary drilling results indicate that a large down-to-the-west fault, that could be the Bow Ridge fault, is farther east than originally mapped.”

Yucca Mountain Project officials last week said they would try to address questions about design changes and the potential magnitude of the Bow Ridge fault, based on the new, preliminary information from bore hole work.

But late Friday, they sent by e-mail a one paragraph statement repeating the DOE’s oft-stated position that it continues to develop the repository’s design and construction and operational plans in preparation for its license application to the Nuclear Regulatory Commission.

While some project scientists are scrambling to complete design of surface facilities, others continue to assess seismic risks in the area.

The problem is that the risk assessment team lacks 65 percent of the facilities’ design, leaving much guesswork in their predictions on how cranes, hoists and pools for transferring some spent nuclear fuel assemblies will function if an earthquake strikes.

To meet a self-imposed deadline for submitting a license application to the Nuclear Regulatory Commission in June 2008, the team is taking a nontraditional approach to their assessment task. It’s based on probabilities that earthquakes will occur.

If calculations show that the probability is too great, then design concepts will have to be modified accordingly. Otherwise, the design will stand.

That’s what a project contractor scientist told a presidential oversight panel last week in Las Vegas. The scientist, Michael Frank of Bechtel SAIC Co., said the team expects to know by February what could go wrong with numerous pieces of equipment in the surface facilities’ operations, how likely that would be and the potential consequences.

The task, he said, “is a very large effort with a compressed schedule.”

A panel consultant, seismologist Leon Reiter, who was at last week’s meeting, said there are more than 10 faults within a 20-mile radius of Yucca Mountain that can generate ground motion, including the Solitario Canyon fault just west of the planned repository site. He said the Solitario Canyon fault is capable of producing an earthquake with a magnitude of about 6.5.

Loux, however, is quick to note that the Department of Energy never has produced any blueprints that state officials could review for comments.

Instead, he said, “Everything is conception designs and cartoons.”