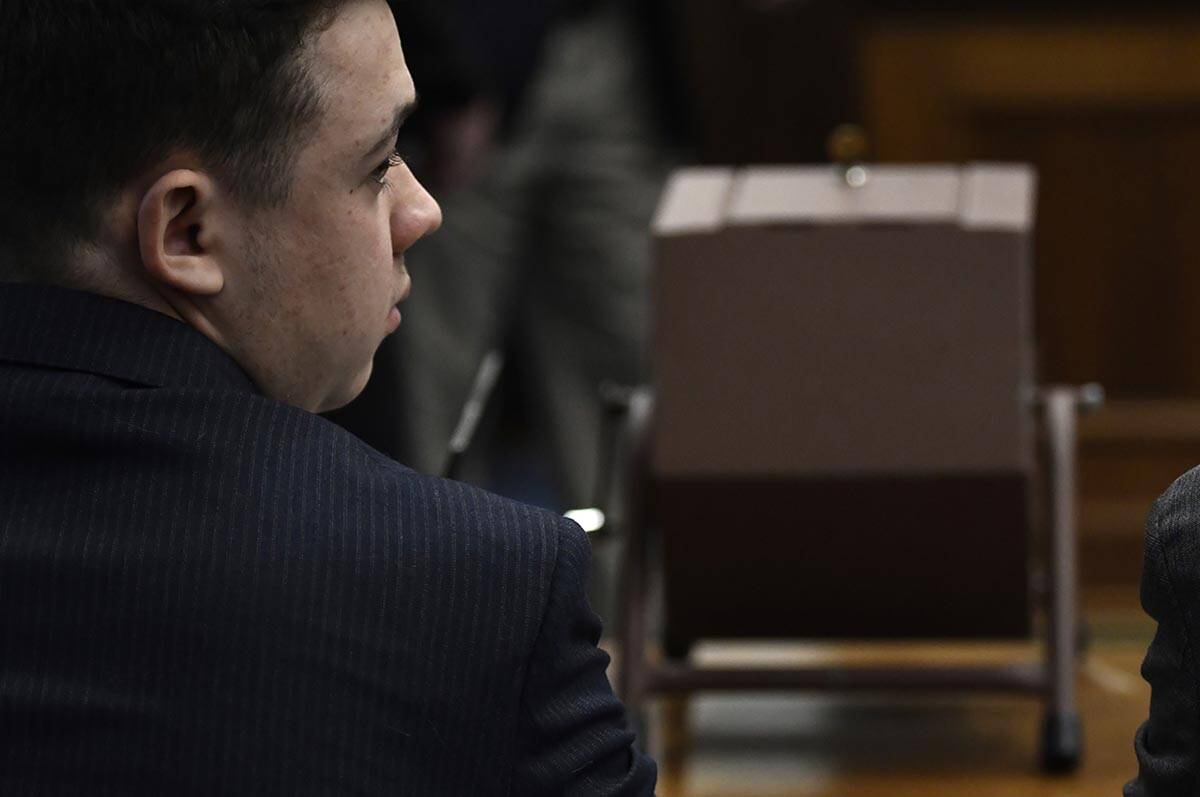 Kyle Rittenhouse sits next to the tumbler that he will use to select the jurors who will not participate in deliberations during his trial at the Kenosha County Courthouse in Kenosha, Wis., on Tuesday, Nov. 16, 2021. (Sean Krajacic/The Kenosha News via AP, Pool)

Trials are a contest between dueling narratives.

In the two racially charged murder trials that have gripped the nation in Wisconsin and Georgia, the narratives also stage a contest between facts and truth, inflamed by legacies of the nation’s troubled history with race.

With that in mind, I felt a poignant sense of deja vu when I saw the Rev. Jesse Jackson show up at the Brunswick, Georgia, trial of the three men accused of killing Ahmaud Arbery.

It felt like old times. I’ve been covering Jackson, as a reporter or a columnist, for so many decades that he once joked that I deserved some sort of an award. Perhaps an old shoe, I suggested, for all the times he might have wanted to kick me for the stories he was not happy about.

But, now that I have the luxury of being able to say what I really feel, I was delighted to see that at age 80, the “Country Preacher” was still on the case despite his Parkinson’s disease, his recent hospitalization for a fall and his hospitalization with his wife in August after testing positive for COVID-19.

Nothing could keep him away from sitting with Arbery’s family, he said, after defense attorney Kevin Gough tried to have “Black pastors” such as the Rev. Al Sharpton, who attended days earlier, removed from the courtroom, “with all due respect,” to avoid unfairly influencing the jury.

The Black pastors symbolized the formidable role that race has played in the case. The three defendants in the case are white, as are 11 of 12 jurors after defense attorneys’ challenges removed 11 of a dozen potential Black jurors.

Citizen’s arrest laws, which predate the nation’s founding, allowed colonial citizens to detain someone they had seen commit a crime. Georgia, along with other states mostly in the South, expanded those laws, partly to aid catching runaway slaves.

Republican Gov. Brian Kemp championed the repeal of its citizen’s arrest law after Arbery’s death amid the wave of racial reckoning that followed the death of George Floyd.

With Kemp’s signature, Georgia becomes the first state to remove a citizen’s arrest statute from its books. All 50 states have a version of the law in place, according to the Atlanta Journal-Constitution. Lawmakers in South Carolina and New York have introduced similar measures.

In general, according to Cornell’s Legal Information Institute, “the ability to perform a citizen’s arrest is the same for a regular person as it is for a police officer without a warrant.”

The obvious problem, legal experts point out, is that citizen’s arrest laws as they are understood — and misunderstood — in the real world can morph quickly into such abuses as racial profiling and the vigilantism on trial in the Kenosha case of Kyle Rittenhouse.

Rittenhouse was charged with five counts, including homicide and attempted homicide, after shooting three people in August 2020 amid the unrest that gripped Kenosha following a police shooting.

Age 17 at the time, Rittenhouse fatally shot 36-year-old Joseph Rosenbaum and 26-year-old Anthony Huber and wounded Gaige Grosskreutz, who was 26.

Rittenhouse pleaded not guilty and said he acted in self-defense after being attacked by people who tried to take his gun.

Prosecutors say Rittenhouse, openly carrying an AR-15 military-style rifle, was a violent aggressor who acted recklessly. But video of the event, appears to show that the young gunman had reasons to fear for his safety, first from a mentally unhinged man chasing him and later from a crowd angered by the shooting.

As a believer in justice and fairness, I don’t envy the jurors in this case. Although all of the parties in this tragic episode were white, it occurred amid the chaos of a riot sparked by the lack of charges against the police officer in the shooting of Jacob Blake, a Black man who survived with serious injuries.

But in the foreground, we have a young man who may have been a sort of “crisis tourist,” as some have called him, but plainly was misled in believing he was doing the right thing by leaving his Illinois home to “help protect” people and property in Kenosha.

No matter which narrative we prefer in this case, the unsatisfying lesson is this: Foolish decisions lead to bad outcomes.