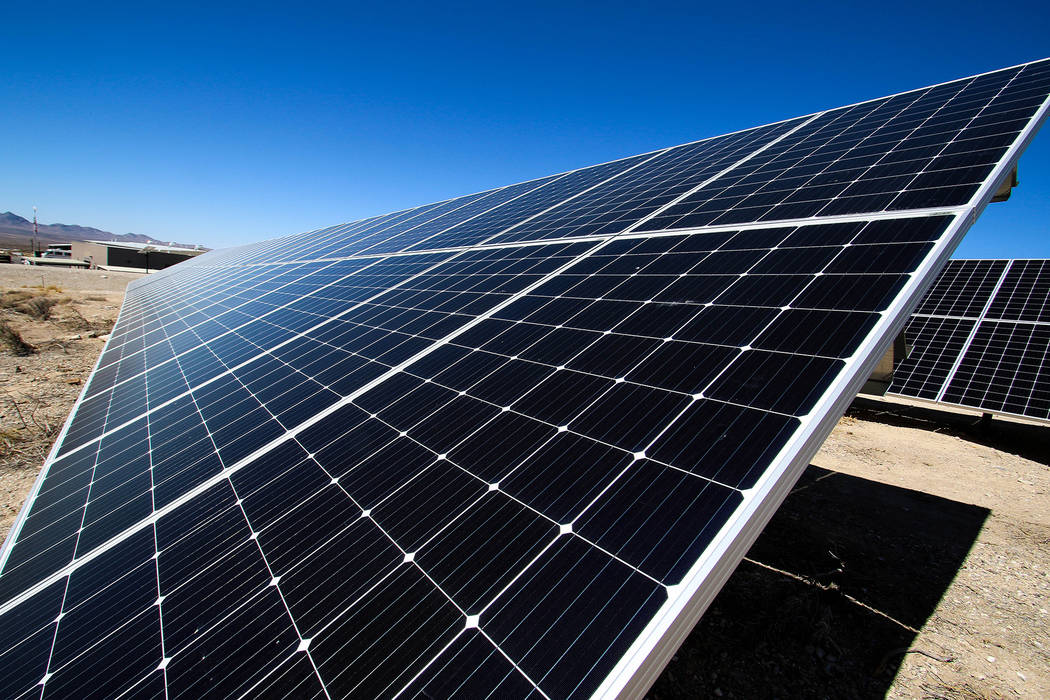 NV Energy has approval to add six solar projects — three in Southern Nevada — in a major step in efforts to double its renewable energy by 2023. The retirement of a coal-powered plant will be accelerated.

Opposition to a new Clark County solar plant is coming from what many observers might find an unlikely source — environmentalists. But it’s hardly surprising.

Once completed, the Gemini Solar Project would produce 690 megawatts of electricity. The solar panels would sit on 7,100 acres around 30 miles northeast of Las Vegas. Nevadans would use at least 60 percent of the power, with the rest going to California and Arizona. For context, 1 megawatt powers 750 homes. Projects such as this are necessary to meet Nevada’s revised renewable portfolio standard, which lawmakers increased this year from 25 percent by 2025 to 50 percent by 2030.

There are many reasons to be skeptical about the constant drone of doomsday prophesy designed to gin up support for a massive state takeover of the American economy under the guise of tackling global warming — not the least of which would be the dozens of inaccurate predictions made by environmental alarmists over the course of decades, if not centuries. But reducing carbon emissions is now a mainstream policy plank.

For many environmental groups, though, the attacks on fossil fuels are less about promoting a shift to cleaner energy alternatives and more about kneecapping economic growth and development. “In fact, nearly half of all blocked energy projects,” noted Jen Schwartz in Outside magazine in 2015, “would provide renewable or clean energy.”

With that in mind, it’s not unexpected that Basin and Range Watch, a Western environmental group, has come out against the Gemini Solar Project. Kevin Emmerich, the group’s director, told the Review-Journal’s Henry Brean that he supports green energy, “but it’s not green when you do it like this.”

Mr. Emmerich worries about the massive project’s “visual impacts” because it would be located near Valley of Fire State Park. He’s also concerned about desert tortoises in the area. The developer estimates that 300 desert tortoises would be moved while the solar plant is being built. Mr. Emmerich argues the tortoises are more likely to die after being relocated. To further stall the project, Basin and Range Watch and another environmental group, Western Watersheds Project, are working to put an area plant — the three-corner milkvetch — on the endangered species list.

With complaints such as these, it’s hard to imagine Mr. Emmerich and his organization would support building a solar plant anywhere.

If only there were a reliable, carbon-free power source that didn’t require so much land. Oh wait. There is — nuclear energy. The Arkansas Nuclear One Station sits on 1,100 acres and produces 1,800 megawatts. That’s nearly triple the energy output of the Gemini Solar Project in less than one-sixth of the space. Only a few brave environmentalists, however, are willing to acknowledge the benefits of nuclear power.

“Environmentalism has become NIMBYism” Michael Shellenberger, co-founder of the Breakthrough Institute, told Ms. Schwartz, who concludes that “this is not the environmentalism of the Rachel Carson era, where a call to movement was hailed as heroic. Nowadays, says Mr. Shellenberger, the movement is in a funk, grappling with fractious infighting while exhausting the public’s patience for its gloom-and-doom scenarios without offering pragmatic solutions.”

Indeed, the public is left with this paradox. Environmentalists argue it will be catastrophic for the planet and its inhabitants if carbon emissions aren’t significantly reduced, but the largest solar plant in the United States must be scuttled because it won’t look very nice and will inconvenience a few hundred tortoises.

If activist greens won’t tolerate even solar or wind energy development, perhaps its best not to shutter all those coal-fired power plants just yet.