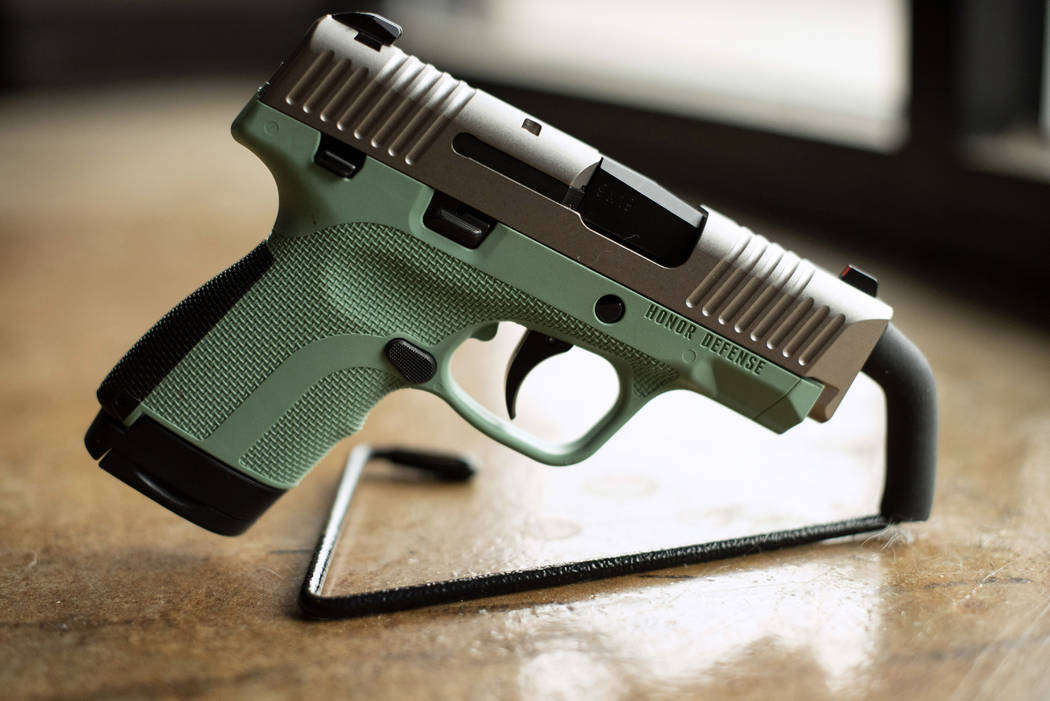 In this April 25, 2018 photo, a .9mm handgun produced by Honor Defense, a gunmaker in Gainesville, Ga., is displayed. In the wake of high-profile mass shootings, corporate America has been taking a stand against the firearms industry amid a lack of action by lawmakers on gun control. Payment processing firms are limiting transactions, Bank of America stopped providing financing to companies that make AR-style guns, and retailers like Walmart and Dick’s Sporting Goods imposed age restrictions on gun purchases. (AP Photo/Lisa Marie Pane)

Leave it to a youngster to show the limits of government power. This is one object lesson, however, every parent wishes hadn’t happened.

On Wednesday, a 9-year-old student at Helen Smith Elementary School brought an unloaded .22-caliber handgun and ammunition to school. Another student found out and told a teacher about the firearm. This is part of a disturbing trend at the Clark County School District. It’s the ninth time this school year district officials have found a firearm on campus.

Schools are supposed to be gun-free zones. These incidents show, however, that just because the government makes a law doesn’t mean that everyone is going to follow the rules. That’s worth remembering the next time gun control proponents call for a gun ban to reduce violence.

Leaving aside Second Amendment concerns, gun bans have a practical problem — as this 9-year-old terrifyingly demonstrated. Just because the government outlaws something doesn’t mean people will obey bureaucratic dictates.

This requires policymakers and the public to think about second-order effects. If the government bans guns in certain areas — or outlaws certain types of guns — law-abiding citizens, by definition, won’t have those types of weapons. But a mere mandate won’t disarm criminals. If you take away weapons from the good guys without disarming the bad guys, you’ve created a situation that’s worse than what you started with.

Just because government declares an area to be a gun-free zone doesn’t mean it will be.