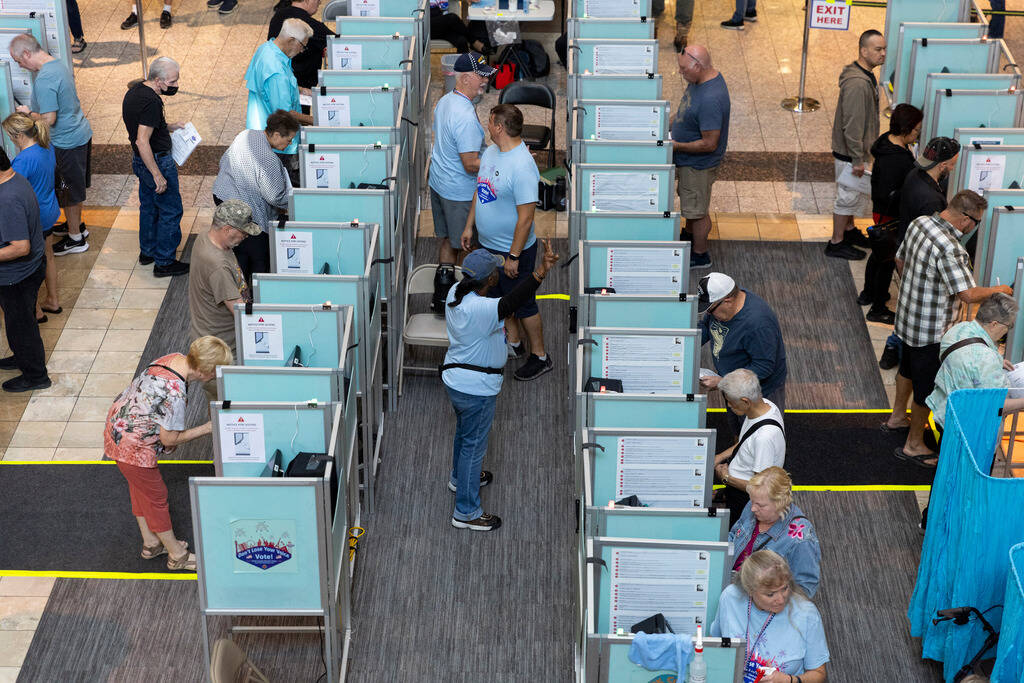 People cast their votes at the polling place inside of the Galleria At Sunset shopping mall in Henderson, Saturday, Oct. 22, 2022. (Erik Verduzco / Las Vegas Review-Journal)

Plot twists should be found in movies, not when election officials tabulate ballots. But such are the problems with ranked-choice voting.

Under this system, voters rank multiple candidates, instead of just voting for their favorite. The winner isn’t determined by who has the most votes initially unless one candidate earns a majority.

For instance, in a four-person race, nobody gains 50 percent. The candidate with the fourth-most votes is then eliminated. Officials then determine who that candidate’s voters selected as their second choice. The votes are redistributed. If no one has a majority, the candidate who is now in third place is removed. The next selection of the eliminated candidate’s voters goes to the top-two candidates, and a winner emerges.

If that sounds confusing, it is. A first-grader could explain how traditional elections work: Whoever has the most votes wins. But as the Alameda County screwup reveals, ranked-choice voting is so convoluted that even professionals get it wrong.

In the Oakland race some people left their first selection blank but had made selections for second place. Under the rules in place in Alameda County, those votes are supposed to count. The second-place selections should have bumped up to first place. The school board race was so tight that adding those ballots moved Mike Hutchinson, the third-place candidate, into second. After the votes from the now-third-place candidate were redistributed, Mr. Hutchinson ended up with more votes than Nick Resnick, who was declared the winner originally.

The error in the Oakland race wasn’t caught by election staff. Outside groups reran the numbers and discovered the mistake.

This isn’t just a California problem. In November, Nevada voters approved a constitutional amendment to bring this system to our state. The amendment must pass again in 2024 to go into effect.

Don’t dismiss this as a simple programming error. Hundreds of voters didn’t make a first selection. That suggests the complexity of the ballot overwhelmed them.

What happened in Oakland is a warning that Nevada voters would be wise to heed. Whatever problems Nevada’s election system has won’t be improved by making voting more confusing. Reject ranked-choice voting.