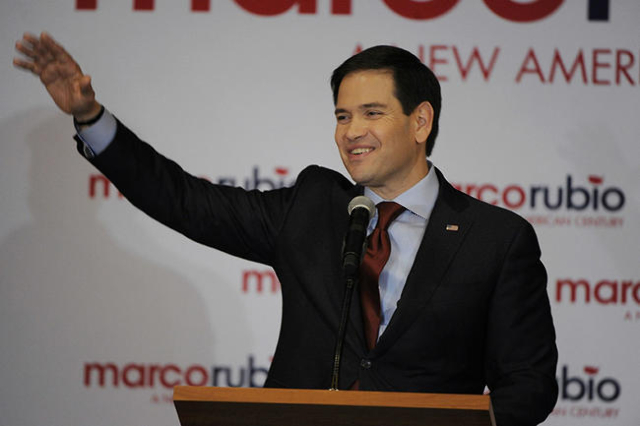 The Republican presidential campaign is focused solely on Nevada for today’s first-in-the-West caucus, and the stakes are huge. A field that numbered more than a dozen candidates several weeks ago is down to five. Donald Trump remains the man to beat, but if that field shrinks further — and it most certainly should — the calculus could change for the blustery billionaire businessman.

On Feb. 5, the Review-Journal editorial board endorsed Sen. Rubio for the Nevada GOP caucus, and his performance over the past two weeks — after a poor debate performance led to a fifth-place finish in New Hampshire — has only reinforced our opinion. In fact, multiple national polls show the Florida senator winning a hypothetical general election matchup over either of the Democratic candidates: Hillary Clinton, who won Nevada’s Democratic caucus Saturday, or Sen. Bernie Sanders, I-Vt.

But as long as the GOP campaign is a three-, four- or five-horse race, everyone will be hard-pressed to beat Mr. Trump.

Consider that Gov. Bush, Gov. Kasich and Dr. Carson won 22.7 percent of South Carolina’s vote Saturday. It’s not unreasonable to imagine a significant portion of those votes going to Sen. Rubio in a three-way race. To Gov. Bush’s credit, he recognized the futility of his campaign and suspended its operations after Saturday’s dismal showing. Much of his Nevada support quickly shifted to Sen. Rubio.

Gov. Kasich and Dr. Carson should follow Gov. Bush’s lead. Instead, both men have said they intend to soldier on, even though they have no realistic path to the nomination, even though they will continue to pull low numbers while taking valuable votes and delegates away from viable candidates.

As we’ve previously noted, although the nominating process is only at its fourth stop, electability should be a primary concern of voters. Mr. Trump and Sen. Cruz have liabilities come November, when everyone has a chance to vote. Sen. Rubio has strong conservative credentials, but he also has the ideas and charisma to bring independents and moderates under the GOP tent on Nov. 8.

Nevada Republicans should plan to caucus today and pledge their support for Florida Sen. Marco Rubio.