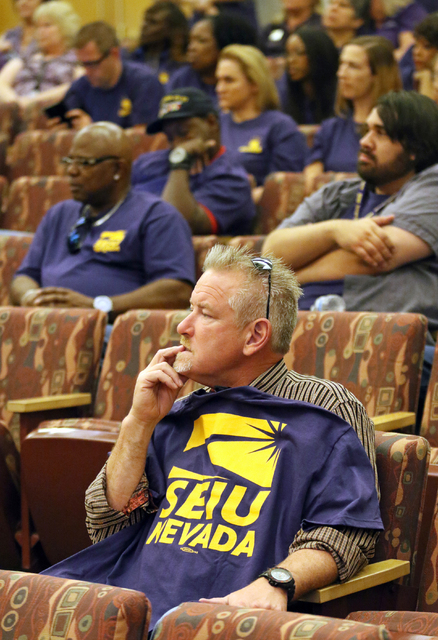 The Mob Museum needs to open a new exhibit. It should commemorate the fact that government employee unions, not mobsters such as Al Capone, are the true masters of the shakedown.

Just look at what the Service Employees International Union Local 1107 is trying to do right now to Clark County taxpayers. The SEIU is the largest union in Southern Nevada. In the upcoming fiscal year, all employees — unless someone’s hit the top of the pay scale — are going to receive a 4 percent raise.

As the Review-Journal’s Scott Davidson reported last week, Clark County and the SEIU have reopened the section of their contract dealing with cost-of-living increases. The union wants a 3.25 percent increase that would cost taxpayers $15.3 million. Clark County has offered 2 percent, which will cost you $9.4 million. Never mind that the consumer price index has generally been well under 2 percent for the past decade.

And remember, this is on top of the 4 percent raises employees are already receiving. That means the issue is whether county workers should receive pay hikes of 6 percent or 7.25 percent. For comparison, private-sector wages rose by 2.5 percent last year.

There’s no way to justify either of those amounts. Does anyone believe the county bureaucracy improved its efficiency by 6 percent or 7 percent in the past year? The SEIU isn’t even bothering to hide what’s going on here. Union bosses are trying to use their political leverage to gain more for government employees at the expense of taxpayers.

“Remember we’re SEIU members, and we all vote,” county property appraiser and SEIU member Bob Costello told commissioners. “We will remember how this board treats us.”

It doesn’t get any clearer than that. Pay up or SEIU foot soldiers will break your knees at the ballot box. That’s an especially potent threat this year, because two commissioners, Steve Sisolak and Chris Giunchigliani, are running to be Democratic gubernatorial nominee. They’re engaged in a heated primary battle that’s already gotten nasty. Mr. Sisolak has been frantically moving left to counter Ms. Giunchigliani’s long-established reputation as a friend to public-sector unions.

What better way to gain the votes of union members than to shower them with taxpayer dollars? After all, the money doesn’t come out of commissioners’ wallets. On the contrary, voting to raise wages for union employees can lead to campaign contributions. For instance, Ms. Giunchigliani took in $10,000 from SEIU Local 1107 in 2013.

It’s a wonderfully circular arrangement that Democrats have exploited for years at the expense of the private-sector schleps who pick up the check.