At the beginning of his State of Metro speech, Joe Lombardo told the crowd, “We have a good story to tell.” It must not have been that worthwhile, however, because the sheriff didn’t invite most media outlets to cover his speech.

Earlier this month, Sheriff Lombardo took to the dais at The Smith Center for the Performing Arts to deliver his annual address. This speech provided an overview of the department’s performance last year, the sheriff’s priorities going forward and his concerns for the future.

All of those topics are of immense public importance. Yet for the second year in a row, the sheriff didn’t invite most media outlets. Metro didn’t stream the address online, either, as most local governments do for such speeches.

But this isn’t about the media. Clark County residents fund the Metropolitan Police Department with tax dollars. Citizens entrust Metro with incredible power. That power comes with accountability to those living within Metro’s jurisdiction, even when it’s inconvenient.

Sheriff Lombardo’s department has done an admirable job of reducing crime. But it’s also important that he and his officers do their jobs in the context of transparency and openness. Just as police need information to solve cases, the public needs access to records to ensure officers are using their authority appropriately.

Unfortunately, Sheriff Lombardo’s commitment to public accountability has been lacking for some time. His speech didn’t provide reasons for optimism. The sheriff listed future challenges at the end of his talk, one of which was complying with Nevada’s public records law.

“We were forced by the Legislature to stand up a public records unit,” Sheriff Lombardo complained. Last session, the Review-Journal was part of a large coalition of media and civic groups that successfully supported a bill strengthening Nevada’s public records laws — a bill Metro opposed.

“I can only imagine it’s going to get worse,” he said. “It’s almost getting to where a huge amount of our resources is not helping what our mission is. It’s just for that zest for information for people to have it and the ability for them to sue us in the justice system for our failure to act.”

It’s ironic for the county’s top law enforcement officer to be complaining about being forced to follow the law. Far too often, getting records out of Metro requires legal action.

These are just the two most recent examples of Metro, under Sheriff Lombardo’s guidance, skirting Nevada’s public records law. The latter is especially revealing because the department routinely releases such information when it involves average citizens. If the sheriff is truly concerned about the expense of complying with records requests, there is an easy solution: His department should promptly produce documents instead of making organizations file lawsuits.

Unfortunately, Sheriff Lombardo’s speech is one more example of the Police Department choosing opaqueness over openness. Transparency is essential to increasing public trust, particularly at a time when police tactics, especially in minority neighborhoods, face increased scrutiny. A respect for accountability is key to securing public trust, which is vital for the hardworking men and women of Metro, who take to the streets every day to protect and serve the community.

“Our legitimacy, our success as a Police Department is based on the public’s trust within us,” Sheriff Lombardo said. “We can’t accomplish the majority of what we do as a police agency and a profession without the public trust.”

Well said. If only the sheriff would realize that gaining the public trust requires a commitment to transparency. 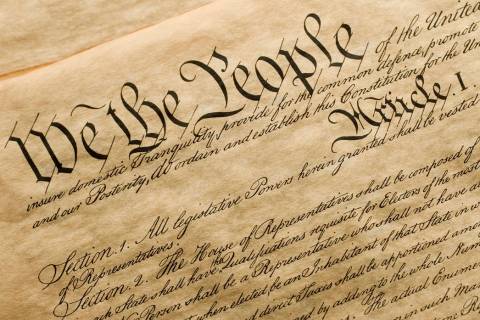 Defenders of leftist campus mobs argue that the notion free speech is endangered in academia represents an overblown right-wing fantasy. Tell that to Jarred Karal and Ryan Mucaj.