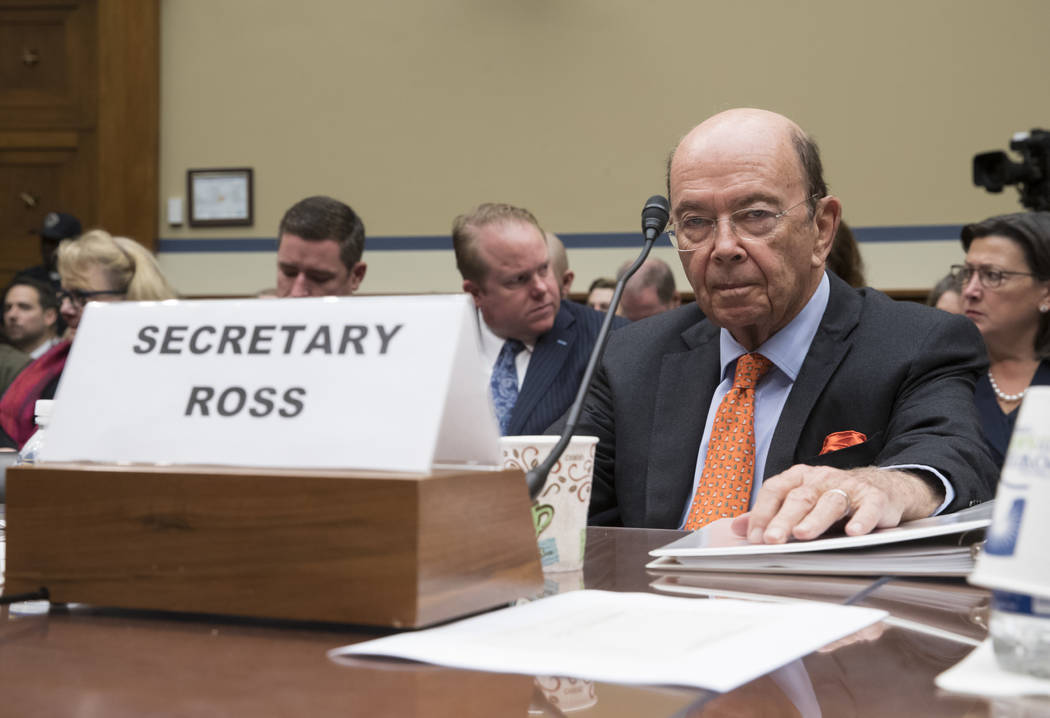 Commerce Secretary Wilbur Ross appears before the House Committee on Oversight and Government Reform to discuss preparing for the 2020 Census, on Capitol Hill in Washington. (AP Photo/J. Scott Applewhite, File)

WASHINGTON — “Where was this person born?”

The Trump administration’s decision to add this question to the 2020 census has met with fierce opposition from critics, who argue it will discourage immigrants — legal and undocumented — from participating in the 2020 count of the country’s population.

“This is a direct attack on immigrant populations that could lead to undercounted and underfunded minority districts across the country,” Sen. Catherine Cortez Masto, D-Nev, said in a statement. “It is an assault on our representative democracy and our Constitution, which requires a complete and accurate count of everyone living in the country, no matter their citizenship status.”

“A question on citizenship is a reasonable and common sense addition to the census,” he said.

An undercount in immigrant communities could have negative consequences for states like Texas and Nevada with considerable immigrant populations. The 10-year headcount determines the distribution of $675 billion of federal money to state, local and tribal governments and the number of seats each state has in the U.S. House of Representatives.

Nevada won a fourth House seat after the 2010 census. Even with the citizenship question, Emily Zamora, executive director of Silver State Voices, doesn’t see Nevada losing a seat after the 2020 census, “but that’s not guaranteed.”

Still, Nevada Gov. Brian Sandoval, a Republican, said Wednesday that he was “concerned about the impact the citizenship question would have on the ability of the 2020 census to identify minority and underserved populations and how they may impact our state in the future.”

According to the Pew Research Center, Nevada had the nation’s highest percentage — 7.2 percent — of unauthorized immigrants in 2014. 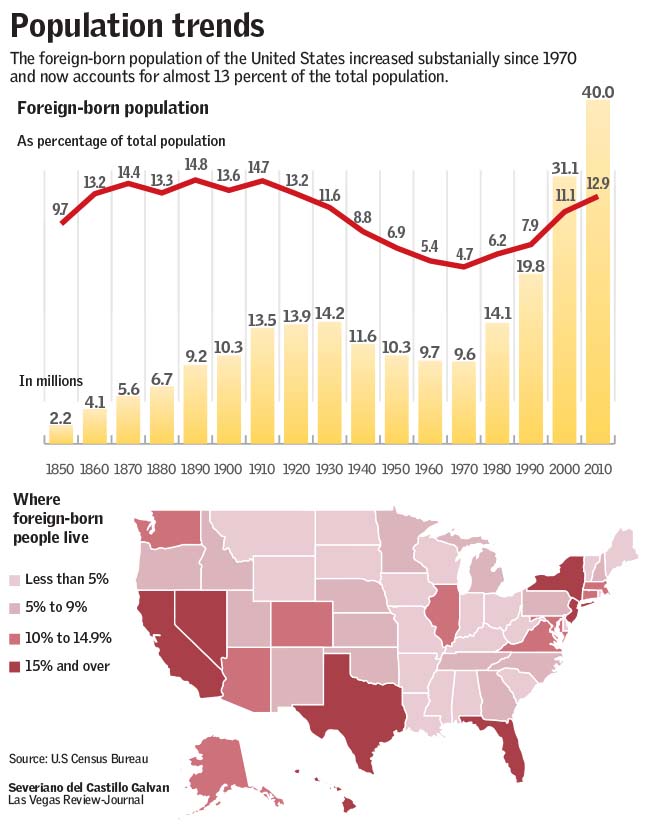 The Census Bureau already asks 3.5 million households if family members were born in the United States — and, if not, if they were naturalized — in its annual American Community Survey, which tracks changes in U.S. demographics.

Since 1960 the bureau has found that the foreign-born population has grown from one in 20 residents to one in eight.

Decennial census surveys, which have been conducted every 10 years since 1790, asked residents about citizenship until 1950, Commerce Secretary Wilbur Ross noted in a memo outlining his decision to revive the question. The Department of Justice had requested the citizenship question to help it enforce the Voting Rights Act.

Ross disagreed with those who argued the citizenship question will skew the count.

“Neither the Census Bureau nor the concerned stakeholders could document that the response rate would in fact decline materially,” he wrote.

The 2000 census included a citizenship question in its long-form survey. While there was a 3.3 percent decline in noncitizen answers compared to short-form surveys, Ross said it is not clear whether the drop was attributable to the citizen question or to the length of the survey, as there was a similar drop-off overall.

“What the Trump administration is requesting is not just alarming. It is an unconstitutional attempt to disrupt an accurate census count,” said Becerra. The question, he argued, violates Article 1, Section 2 of the U.S. Constitution, which calls for an “actual enumeration” of all the people in every state every 10 years.

A spokesman for Nevada Attorney General Adam Laxalt said the state was not invited to join the lawsuit. “Our office is monitoring the suit,” said Communications Director Monica Moazez.

“It is imperative that the data gathered in the census is reliable, given the wide ranging impacts it will have on U.S. policy,” Cruz said in a press release issued by the three lawmakers.

Sen. Dean Heller, R-Nev., did not respond to Review-Journal requests for his position on the citizenship question.

In a statement, Rep. Jacky Rosen, D-Nev., who is challenging Heller for the Senate seat, asserted the citizenship question “politicizes the census and drags its integrity into question. It’s clear that the Trump administration is looking to ensure Nevada’s immigrant communities are underserved and underrepresented for the next decade.”

But Danny Tarkanian, a Republican candidate for Nevada’s 3rd Congressional District, said the question was relevant and “should be on the census.”

“It seems like such a ridiculously commonsense proposal. Why wouldn’t you want to know how many people are in the country legally?” said Tarkanian. “If they’re not here legally and don’t feel comfortable answering the question, then they shouldn’t be in the country.”

Mark Krikorian of the pro-enforcement Center for Immigration Studies contended that Democrats fear that Washington might look at census citizenship numbers and apportion House seats based on the number of citizens, not residents.