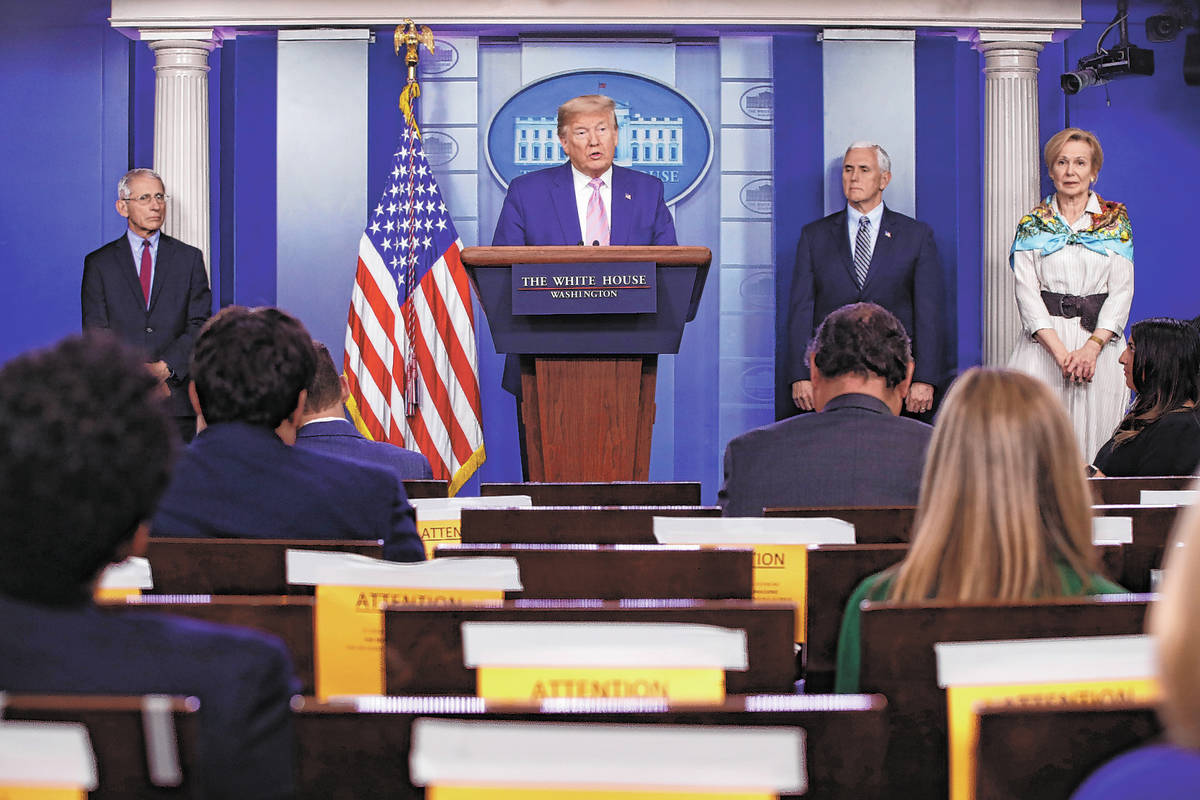 When President Donald Trump told Turning Point USA last July, “Then, I have an Article II, where I have the right to do whatever I want as president,” the left conjured up images of a dictatorial strongman tossing out dictates like candy, which was not a far-fetched notion given his erratic hiring and firing of White House staff.

Their worst fears have not been confirmed. With the coronavirus epidemic, Trump has chosen to govern with a light touch — allowing governors to decide whether or not to issue shelter-in-place policies — while many on the left have urged him to govern with an iron fist.

Last month as he began to restrict nonessential businesses, New York Gov. Andrew Cuomo complained, “This is a national pandemic and there are no national rules.”

In The New York Times, Ezekiel Emanuel, a health-policy adviser to former Vice President Joe Biden, wrote that Trump “needs to immediately order the closing of all schools and nonessential businesses and impose a shelter-in-place policy for the entire country.”

The left may have blanched when Trump restricted travel for noncitizens flying in from China, but their luminaries sure wanted Trump to order folks in Sioux Falls not to leave home. In Emanuel’s case, for as long as 18 months.

It didn’t matter to them that laws alone don’t work, as states with strict stay-at-home rules had their share of scofflaws who went to church, bars or the beach, undeterred by the prospect of public shaming, fines and even arrest.

The idea of some Midwestern rednecks shooting hoops together was more than they could bear. (Six states — Wyoming, North Dakota, South Dakota, Nebraska, Iowa and Arkansas — have no stay-at-home orders, according to the Kaiser Family Foundation.)

And why? Social distancing is pretty much a way of life for South Dakotans, as South Dakota School of Mines student Faith Bottum wrote in The Wall Street Journal. As of April 3, the Mount Rushmore State catalogued 165 confirmed cases, two deaths and 57 recoveries.

“South Dakota is an agricultural state,” Bottum wrote, “a place where the foundation of local culture remains the old farms and ranches. People are taught from an early age to keep their feelings to themselves, work hard and expect that something will go wrong. A deadly pandemic threatening lives and livelihoods only confirms everybody’s worldview.”

Of course, measures that are needed in Gotham may not apply on the ranch.

The latest statistics suggest that the light touch is working.

I thought Nevada Gov. Steve Sisolak was wrong to order the closure of nonessential businesses and public schools in mid-March, but his action surely has saved lives. (I still have doubts on public schools.) And there is much to be said for an order made in Nevada rather than inside the Beltway.

Imagine if Trump had ordered a national shutdown in February or March, as some do-gooders have criticized him for not doing. How do you think that would have worked? Would college students sagely have canceled spring break? Would New Yorkers have stopped going to Central Park? Would his knee-jerk critics have saluted at Trump’s sagacity?

No. The virus would have become a referendum on Trump, and a third of the population would look at the pandemic with distrust and resentment. And if there is one redeeming element to the COVID-19 outbreak, it’s that, finally, there is a huge round-the-clock news story and it’s not about Trump.