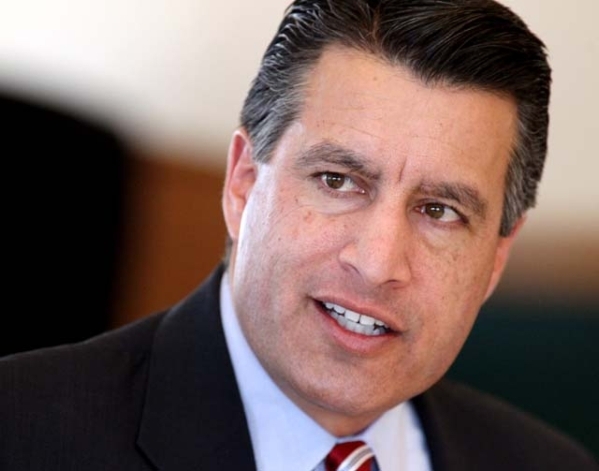 Nevada Gov. Brian Sandoval works in the Board of Examiners meeting at the Capitol, in Carson City, Nev., on Tuesday Jan. 8, 2013. Â° (Cathleen Allison/Las Vegas Review-Journal)

After Paris, it’s not hard to picture the nightmare scenario in Las Vegas.

Inside a Strip casino, there’s a large gathering of people, at a club, or perhaps a show. Terrorists disguised as winter tourists produce easily concealed 9mm H&K MP5K submachine guns from beneath their jackets, and start shooting.

There’s chaos, screams and bodies falling as people scramble over each other to get out. Casualties mount.

But the real nightmare comes later, when it’s revealed the shooters came to America disguised as Syrian refugees fleeing war and oppression in their home country.

That’s clearly what’s concerned governors across the country, some of whom (such as Bobby Jindal of Louisiana, who dropped out of the 2016 presidential race Tuesday) have outright refused resettlement of Syrians in their home states. Others (including former Florida Gov. Jeb Bush and Sen. Ted Cruz of Texas) have suggested allowing only Christian refugees. And Democratic as well as Republican lawmakers are suggesting a pause in accepting Syrian refugees may be in order.

If the definition of terrorism is to change policy by the threat or actual use of violence, we’ve already lost this round. Because Paris has made us doubt our usual response of compassion.

But the nightmare scenario is clearly on the mind of Gov. Brian Sandoval, who issued a calm, level-headed statement even as he penned a letter to President Barack Obama asking for a review of the refugee vetting process.

“Like many of my fellow governors, I am concerned first and foremost with the security of my state in the aftermath of Friday’s tragic events in Paris,” Sandoval said in a statement. “It is in the interest of all Nevadans and the millions who travel to our state annually to insist on extensive evaluations of any potential risk individuals may pose to Nevada or our national security.

“Earlier today, I asked state agencies to help determine the total number of refugees currently in Nevada. I have also contacted the White House and will follow up with a letter to President Obama requesting a review of the refugee eligibility, security, funding and notification processes for resettlement programs conducted by the U.S. Department of Homeland Security, U.S. State Department and related agencies. We must balance our nation’s role as an international leader with the safety and security of our citizens and visitors.”

Others want to simply shut down the state’s borders entirely. And it’s not just radicals such as Sharron Angle, whose racist immigration ads were the lowlight of her failed 2010 Senate campaign. It’s also mainstream leaders such as U.S. Sen. Dean Heller, who long ago stopped saying things like “anchor babies” and morphed into one of the Senate Republican votes in favor of comprehensive immigration reform.

Heller wrote to Sandoval, saying in part, “I hold the responsibility to ensure the safety of Nevadans above all else. … Until my questions have been sufficiently answered by [Department of Homeland Security] and the State Department and I believe that this program no longer presents a threat to Nevadans, I encourage you to reject any further acceptance of Syrian refugees in the State of Nevada.”

The fact is, there’s no fingerprint scan or biometric data that can determine whether a person is good or evil, an innocent fleeing the horrors of war or an evildoer looking to start one. Members of jihadi groups have shown no compunction about hiding among civilians.

But at its best, America is the light of the world because of the role this nation plays in helping alleviate international suffering. It’s that generosity of character that the barbarous murderers of Paris and their ilk seek to destroy.

Whatever else we do, we should not let them succeed at that.

— Steve Sebelius is a Las Vegas Review-Journal political columnist and co-host of the show “PoliticsNOW,” airing at 5:30 p.m. Sundays on 8NewsNow. Follow him on Twitter (@SteveSebelius) or reach him at ssebelius@reviewjournal.com.