The race for Nevada’s 3rd Congressional District got off to an early start last week after former Republican state Treasurer Dan Schwartz announced he would take on freshman Democrat Susie Lee.

It’s not likely Schwartz will be the only Republican to seek the seat. Spanning the bottom part of the state and the suburbs of Summerlin, Green Valley and Boulder City, the 3rd District is Nevada’s closest by registration, and has seesawed back and forth between Republicans and Democrats since it was created in 2001. President Barack Obama won the district twice — easily in 2008; very narrowly in 2012 — and President Donald Trump won it in 2018 by a single percentage point.

Currently, Democrats outnumber Republicans by just more than 7,200 voters in the district, with more than 102,000 nonpartisans. Lee outpolled Republican Danny Tarkanian in 2018 by nearly 26,000 votes in 2018 in a field of seven candidates, including minor party representatives and nonpartisans.

Before that, Democrat Jacky Rosen defeated Tarkanian in 2016 by a much slimmer margin, fewer than 4,000 votes in a four-person race.

Those results show the district is winnable by Republicans and that Lee can’t take anyone for granted.

So does the district’s history: From 2002 to 2008, Republican John Porter held the seat. He was defeated by Democrat Dina Titus in 2008, but she lost to Republican Joe Heck in 2010. Heck represented the district until 2016, when he left the seat to run unsuccessfully for the Senate.

So that’s six terms in Republican hands, three in Democratic.

But Schwartz isn’t your typical Republican. Conservative in some ways, liberal in others, he cuts against the stereotype.

During his single term as treasurer, Schwartz challenged Republican Gov. Brian Sandoval on multiple fronts. He advocated against the moderate Sandoval’s proposal to institute the state’s first tax on business income in 2015, presenting a thin “alternative budget” that was built in part on a tax that couldn’t be imposed.

He advocated strongly for the education savings accounts program, a proposal to divert state education dollars to parents who could then use the money for expenses including private-school tuition. The program was opposed — and ultimately repealed — by Democrats.

But Schwartz was also the only Nevada official to predict — based on his analysis of the company’s finances — that the Faraday Future electric car plant would be a flop.(Schwartz was once the owner of the Asian Venture Capital Journal.) While the rest of the state held a rushed special session to instill tax breaks for Faraday into state law, Schwartz was confidently predicting the plant would never be built. Turns out, he was right, and everybody else was wrong.

Schwartz also told the Review-Journal in 2018 that “I think the Raiders stadium is going to blow up financially. There’s no equity in the deal — it’s all funded on debt.”

During his term as treasurer, Schwartz proposed some serious reforms of Nevada’s high-interest payday loan industry. A bill he requested would have established a statewide database of payday loans and prohibited the same person from taking out more than one loan at a time. (The Democratically controlled Legislature this year adopted a payday loan database, sponsored by state Sen. Yvanna Cancela, D-Las Vegas.)

The question remains, however: Can Schwartz win? In 2012, he ran for the 4th Congressional District and came in fourth in a Republican primary, behind Tarkanian, Barbara Cegavske and Kenneth Wegner. His statewide treasurer run came in a very good year for Republicans — the party captured the governor’s mansion, all constitutional offices and both houses of the Legislature for the first time in decades.

But in 2018, he ran for governor and finished a distant second in the GOP primary to eventual nominee Adam Laxalt, a gaping margin of 71 percent to 9 percent in an eight-person race.

Lee, meanwhile, has been careful to avoid missteps during her freshman term. She’s taken reliable positions against Yucca Mountain (and the shipment of plutonium to the Nevada National Security Site). She’s taken on health care at the Veterans Administration and a bill to prevent gambling addiction among service members. She’s spoken up for keeping the Affordable Care Act, especially the protections for people with pre-existing conditions, but stopped short of joining calls from more left-leaning Democrats to adopt a “Medicare for All” system, and advocated for student loan reforms.

In short, she’s done her best to avoid handing any opponent a juicy issue to run on.

Not only that, but Lee is in the Democratic Congressional Campaign Committee’s Frontline program, which aims to help Democrats in competitive districts keep their seats. She may also be helped if other Republicans enter the primary with Schwartz, keeping them busy with an intramural fight while she enjoys a clear path to the general election.

The 3rd District was drawn in 2001 to be a competitive seat and it has proved to be exactly that. And that competition has gotten off to an early start. 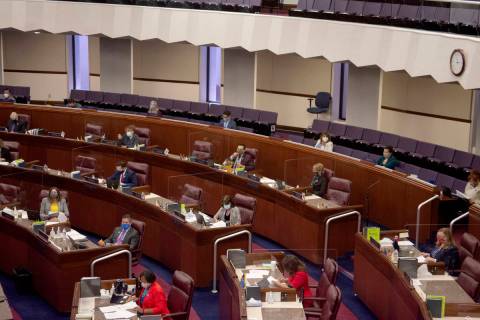