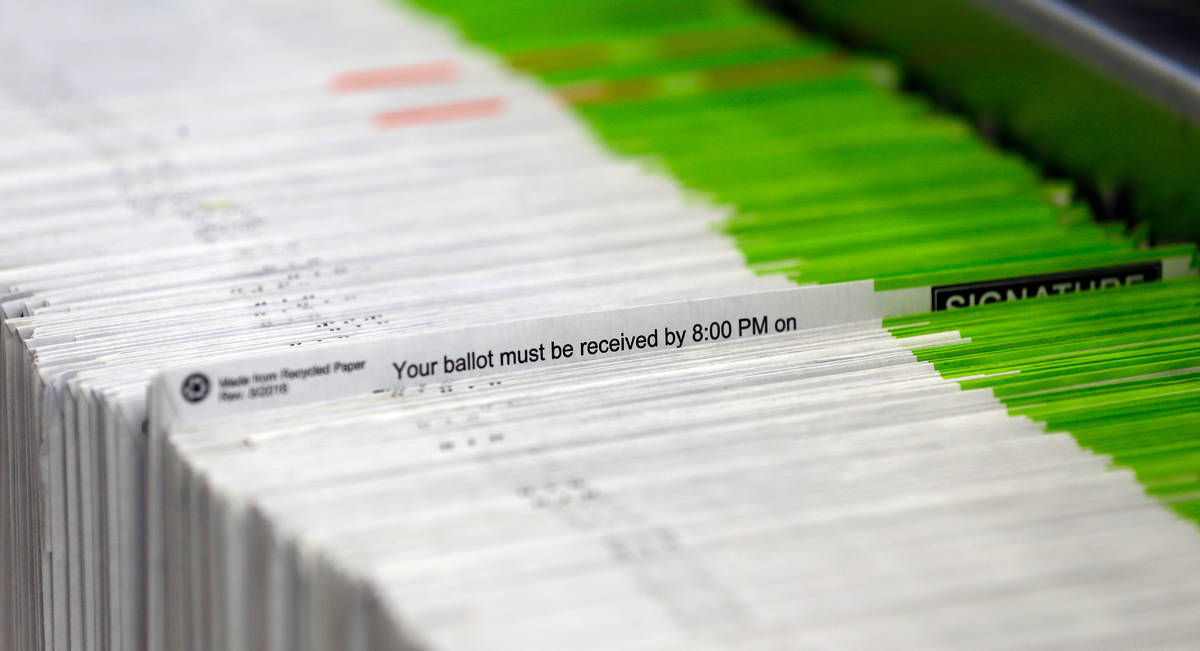 It all comes down to Tuesday.

The 2020 election — like 2020 itself — seems to have gone on far longer than it actually has. But in two merciful days from now, it will all come to an end.

The nature of voting in a pandemic, like just about everything else, has changed considerably. Many more people have chosen to vote by mail rather than in person, which has extended the early voting period — usually two weeks — to about a month.

But Tuesday is Election Day and, like the period at the end of this sentence, it marks the end of voting.

As of Thursday, more than 900,000 Nevadans had cast their votes, slightly more than half the 1.7 million active registered voters on the rolls as of September. That number will surely rise as more ballots are arriving in the mail every day and the final early voting ballots are gathered.

If you haven’t voted yet, even if you haven’t registered yet, there is still time. You can still make your voice heard.

On the ballot this year are races for president of the United States, representatives in Congress, the Legislature, judges, university regents, state Board of Education members and trustees of the Clark County School District — not to mention five constitutional amendments.

It’s a daunting ballot, the longest Clark County voters have ever seen, stretching the mail ballot to two pages for the first time.

But don’t worry: There are plenty of places to go to get voting information. Because voting isn’t just the act of filling in a bubble on a paper ballot or pushing a touchscreen in a voting booth. It’s much more than that.

First, you have to get educated. As the politics and government editor of the Review-Journal, I can tell you that many reporters have worked hard all year long to bring you the information you need to cast an informed vote.

Reporters interviewed every single candidate in every race on the ballot, or at least every one who would return our calls. (For reasons that remain a mystery, some candidates dodge media calls, which should make all voters suspicious.)

We’ve collected those stories in our Review-Journal voter guide, which you can find on our website or with a simple Google search. When prompted, enter your mailing address, and the guide will display a copy of your ballot, with all the races in which you’re eligible to vote. You can click on candidates to find biographical information, candidate websites, and our stories about their races.

A huge chunk of the ballot is devoted to judicial races, and we’ve got plenty of material for you there, too. This year, the Review-Journal conducted debates in every primary and general-election contest for the bench, from Supreme Court all the way down to Justice Court. Those debates endeavored to ask candidates questions relevant to the job of being a judge, and provide voters a chance to see and hear each candidate in her or his own words, describing why they want one of the most important elected jobs in the state.

Not only that, but the Review-Journal also conducted its judicial performance survey, asking the attorneys who practice before those judges to rate them and say whether they should be retained or not. That information is also available on the newspaper’s website.

This election season has unfortunately been characterized by plenty of misinformation, exaggerations and, yes, outright lies designed for the purpose of suppressing your vote. You will hear about candidate corruption, with the goal of convincing you that all politicians are corrupt. They are not.

You will hear that your vote doesn’t matter. It does.

You will hear that fraud is rampant. It’s not. As at least one judge has ruled that the safeguards in place to prevent fraud are adequate to the task.

It all comes to an end Tuesday. If you haven’t voted yet, there’s still time.

Your job — your duty — as a voter is to ignore the people who don’t want you to make your voice heard, to educate yourself and to go to the polls — whether by mail or in person — and to do your part in making this a more perfect union. That is the only way to perpetuate our constitutional republic and secure those blessings of liberty to ourselves and our posterity.

If you haven’t done it already, when Tuesday comes, get out and vote.