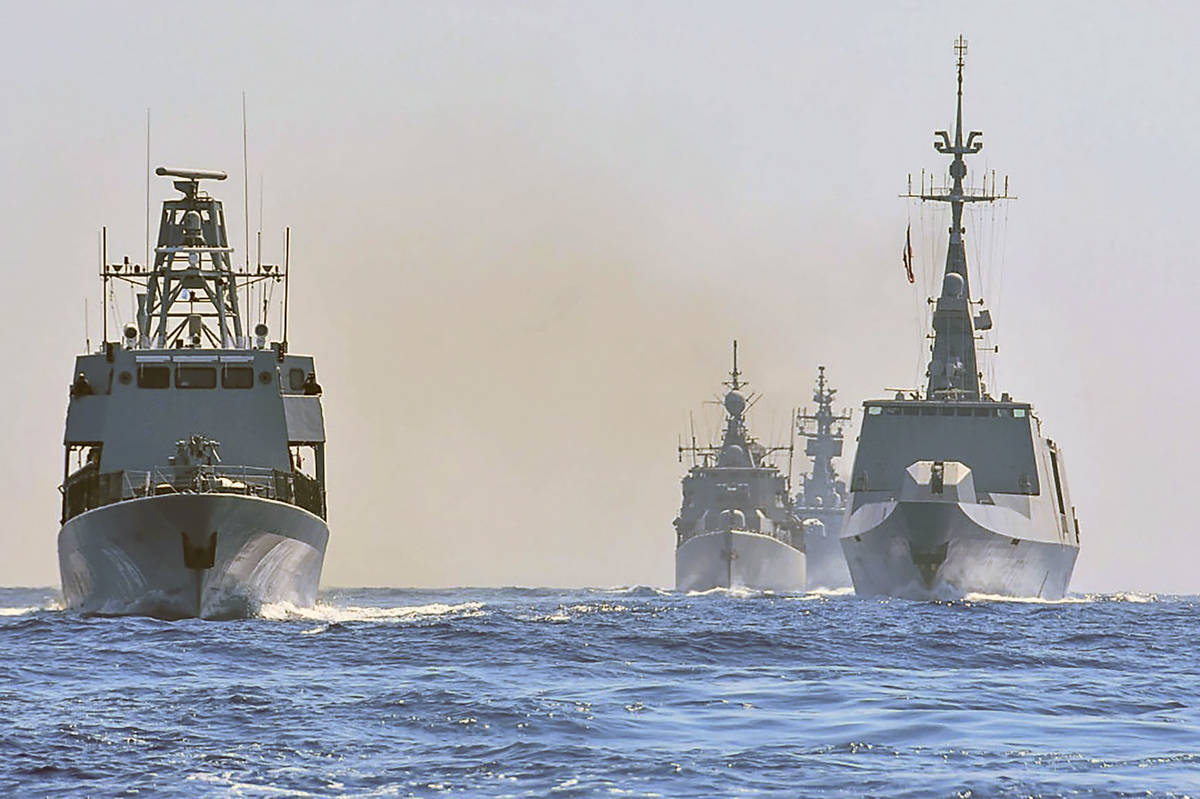 Warships from Greece, Italy, Cyprus and France participate in a joint military exercise which was held from 26-28 of August south of Turkey in eastern Mediterranean sea. (Greek Defense Ministry via AP)

Since the loss of much of the Christian Balkans to the Ottomans in the 15th century, Greece and what would later become modern Turkey have been rivals, outright enemies and often at war. Mutual NATO membership and shared Cold War fears of Soviet Russia did not stop the two from almost going to war after the Turkish invasion of Cyprus in 1974.

Still, the current escalation seems weird. Most territorial claims and disputes over borders were settled almost a century ago, and the two countries have had mass population exchanges. Why, then, does the divide still run so deep?

Turkey is a Muslim country and was once the Ottoman Empire that ruled much of the Islamic world. Greece is still surrounded by Muslim countries.

Turks are quick to remind everyone that from the late 15th century to the early 19th century, most of Greece and the Aegean Islands belonged to the Ottoman Empire.

Greeks note that Istanbul, formerly Constantinople, was the capital of Christendom for 1,000 years and the center of the vast Byzantine Empire, where Greek was widely spoken.

In modern times, after the bitterness over the Cyprus crisis of 1974 and years of socialist governments, Greece was vehemently anti-American despite shared Western traditions. In contrast, Turkey once prided itself on its secular customs institutionalized by its first modern, pro-Western president, Mustafa Kemal Ataturk. His successors until recently were pro-American autocrats.

Now, geostrategic relations have flipped. Both nations remain NATO members, but Greece, not Turkey, is also a member of the European Union. Turkish northern Cyprus is largely considered a rogue territory, while democratic Greek Cyprus is an EU member.

Moreover, Turkey under President Recep Tayyip Erdogan has become an increasingly Islamic state, often hostile to the United States It likes to leverage its NATO membership to advance its new Middle East agendas.

It is Turkey, not Greece, that has been acting provocatively on the world stage. It recently refashioned the iconic Hagia Sophia cathedral, built by the Byzantine emperor Justinian in the sixth century — long one of the most iconic churches of the Christian world — from a museum into a mosque.

Turkey is often engaged with Vladimir Putin’s Russia and the Iranian theocracy in Middle Eastern intrigue. It opposes French efforts to calm Libya. Turkey has compromised NATO weapons systems thanks to its new arms relationships with Russia.

Turkey is more likely than Greece to threaten force to advance its oil and gas claims. And it hints that dozens of Greek islands off the Turkish coast — Greek since pre-antiquity — may soon be targeted. Most neutral diplomats and legal scholars say Greece has the more sound legal claim over the disputed, oil-rich waters.

Today, the ancient rivalry might seem an uneven match.

Greece is a tiny country of less than 11 million people. Turkey is a country of some 82 million people and has far more jet fighters than Greece and a much larger army. Yet by many accounts, Greek pilots are among the best in the world. Greece’s smaller navy is far more effective than Turkey’s.

And while U.S. President Donald Trump has reached out to Erdogan, his administration has also been among the most pro-Greek in years, forging a number of military and weapons pacts. For all the talk of American withdrawal, the Sixth Fleet remains the most powerful in the Mediterranean.

The past policies of the Obama administration — tilting toward Turkey, inviting Putin into Syria, favoring Iran in the Middle East — have only muddied the Mediterranean waters.

Most Americans sympathize with underdog Greece. Many have close cultural and ethnic ties with Greece, Israel and Armenia, non-Muslim countries surrounded by Islamic nations. All three, at one time or another, have been bullied by Turkey.

Most NATO members, especially France, also favor Greece. Traditionally pro-Turkish Germany has tried to mediate — but clumsily so. German Chancellor Angela Merkel’s government is now more hostile to the Trump administration than it is to Putin’s Russia, its new partner in a huge natural gas deal.

Merkel prompted a flood of millions of African and Asian migrants into Turkey and Greece by promising them eventual refuge and amnesty in northern Europe. The massive refugee camps have spiked tensions along the Greek-Turkish border.

The paranoid Turkish government is now wracked by fissures after a failed 2016 coup. Greece is a stable European democracy.

Add up all the contorted rivalries, histories and overlapping alliances and loyalties, and the dispute may seem irrational, if not silly. It likely would only end in a stalemate, an economic catastrophe, the near destruction of NATO’s southern flank, and the eventual intercession of the United States to warn Turkey to cease aggression.

But reason has seldom stopped the outbreak of war — the stuff of ancient passions, bitter history and ethnic and religious frenzy.

— Victor Davis Hanson is a classicist and historian at Stanford’s Hoover Institution and the author of “The Second World Wars: How the First Global Conflict Was Fought and Won.”