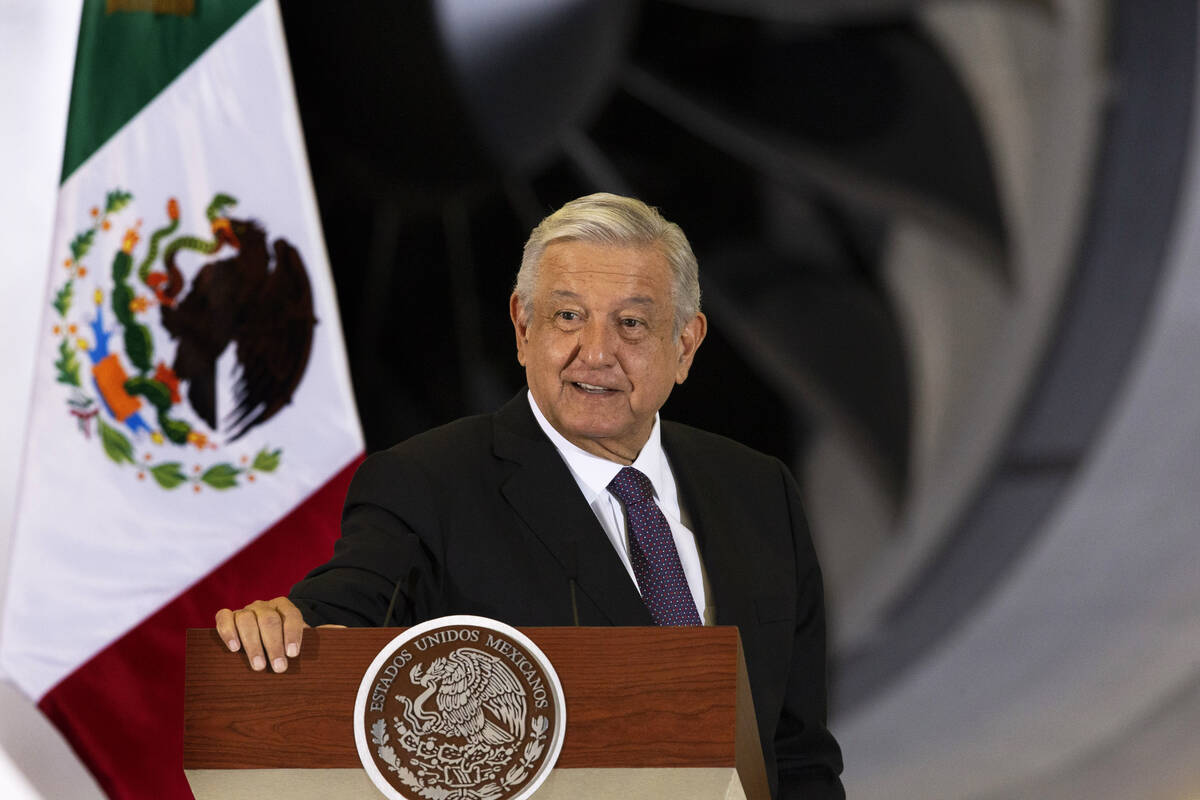 FILE - In this July 27, 2020 file photo, Mexican President Andres Manuel Lopez Obrador gives his daily, morning press conference in front of the former presidential plane that has been for sale since he took office, at Benito Juarez International Airport in Mexico City. López Obrador said Tuesday, Sept. 15, 2020 he will ask the Senate to schedule a referendum on whether to investigate and possibly bring charges against his predecessors, including almost all of Mexico’s living ex-presidents. (AP Photo/Marco Ugarte, File)

Left-wing Mexican President Andres Manuel Lopez Obrador recently praised a visiting President Joe Biden: “Just imagine: There are 40 million Mexicans in the United States — 40 million who were born here in Mexico, (or) who are the children of people who were born in Mexico!”

Why wouldn’t Obrador be delighted? Since Biden took office in January 2021, America has allowed some 5 million to 6 million illegal entries across its southern border.

Obrador further congratulated the malleable Biden, whom he apparently sees as a kindred but complacent left-wing spirit: “You are the first president of the United States in a very long time that has not built even one meter of wall.”

Translated that means Mexico is delighted that the United States now cares little about the security of its own border, the disappearance of which apparently is wonderful news for Mexico.

Note that Mexico itself facilitates illegal transits across its own southern border — as long as such Central American and other global migrants keep heading northward into the United States.

But when or if they pause, try to stay in Mexico, commit crimes or expect Mexican social services, then almost immediately Mexico City sends thousands of troops to close its border with Guatemala, deports the illegal crossers and revives talk of building a border wall of its own.

But it is a nightmare to Americans who poll overwhelming against the subversion of their own border security. They are exhausted by the influx of death-dealing drugs. And they are furious over the hundreds of billions of dollars diverted from their own strapped social services to attend to the needs of foreign nationals who have broken their laws.

Even overwhelmed blue sanctuary cities that once boasted of nullifying federal immigration law are now beginning to object to Biden’s complicity in Mexico’s manipulation of the border.

Obrador clearly is delighted that Biden is the first White House occupant who in matters of the shared southern border grants all of Mexico’s wishes, but almost none of his own citizens’.

That reality raises the question that if Mexico were a declared enemy of the United States, how would it behave any differently than it is now?

Take drugs, for example. American overdoses from fentanyl and other opioids are nearing 100,000 deaths per year.

Almost all such lethal opiates are manufactured in factories operated by drug cartels in Mexico that enjoy de facto immunity from prosecution. The Mexican opioid industry was designed solely for lucrative export to the United States — with zero concern over the death and destruction its products cause here.

Well aside from human trafficking and smuggling, cartel drugs indirectly earn the Mexican economy somewhere between $35 billion to $45 billion each year.

A hostile China profits by selling Mexicans the raw product. Beijing gains satisfaction that at the present death rate, more Americans will perish this decade alone from imported Mexican drugs than all the combat deaths in all the wars since America’s founding.

Obrador is equally callous in bragging that he exports his own poor. Left unsaid is that a naturally rich Mexico either will not, or cannot, adequately employ, feed, shelter and protect its own impoverished citizens.

So instead, it cynically sees its own people as a lucrative export commodity while holding U.S. laws in veritable contempt.

Currently, Mexican nationals are sending nearly $60 billion a year in remittances from the United States to Mexico to aid friends and families who do not find enough succor from their own government in Mexico City. Untaxed remittances far and away constitute the largest source of Mexico’s foreign exchange income.

Much of that gifting is made possible by generous American state and federal subsidies to illegal aliens. Frequent subsidized housing, health care, legal assistance, education and food in the United States are often used to free up cash for illegals, who then send it to Mexico.

Mexico sees this export of its own people as a win-win-win-win proposition.

Illegal immigration to America exempts Mexico from covering the social welfare costs of its poorest. In safety-valve fashion, it exports the volatility of social inequality rather than spending large sums to address it.

Mexico sees its huge and growing expatriate community as a valuable lobbying lever inside America, given the longer Mexican nationals are absent from Mexico, the more they romanticize the country they fled.

Finally, Mexico is a left-wing nation. The more it sends its poor to the United States, the more it feels Democratic politicians who grant concessions to Mexico will gain valuable new political constituents — ensuring still further concessions.

One sure sign of historic national decline is the collective inability of a government and its people to defend their own borders and national sovereignty.

Victor Davis Hanson is a distinguished fellow of the Center for American Greatness and is a classicist and historian at Stanford’s Hoover Institution. Contact him at authorvdh@gmail.com.