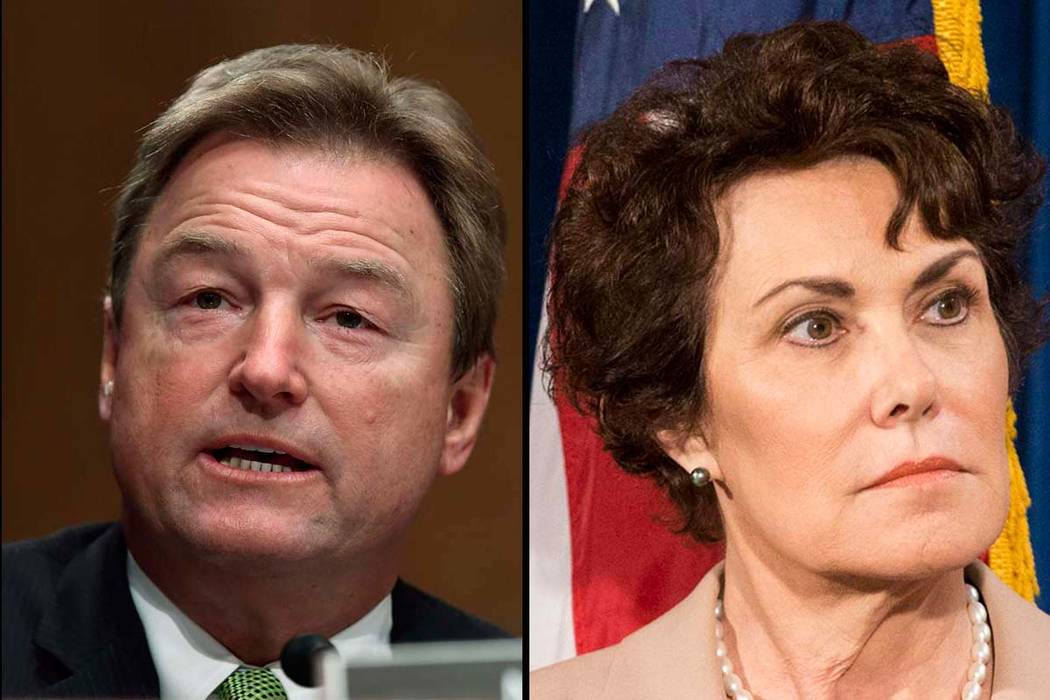 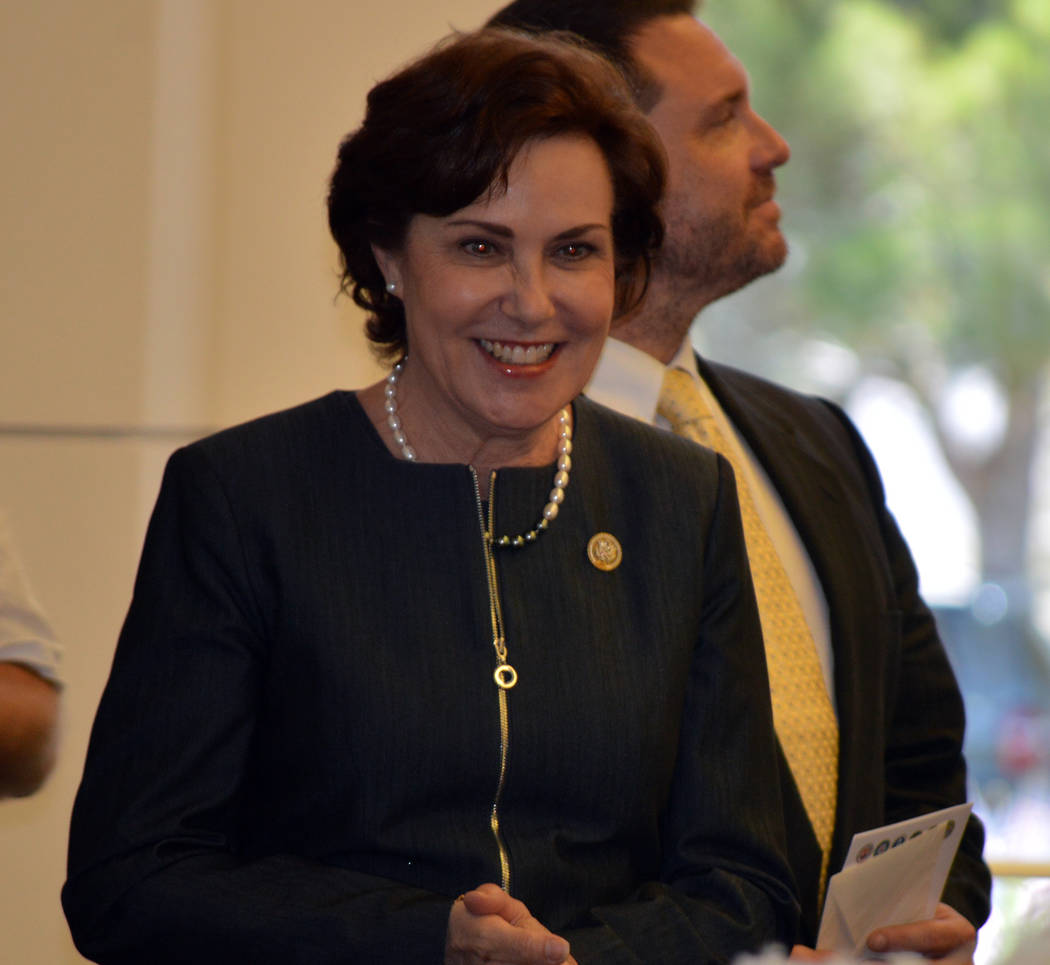 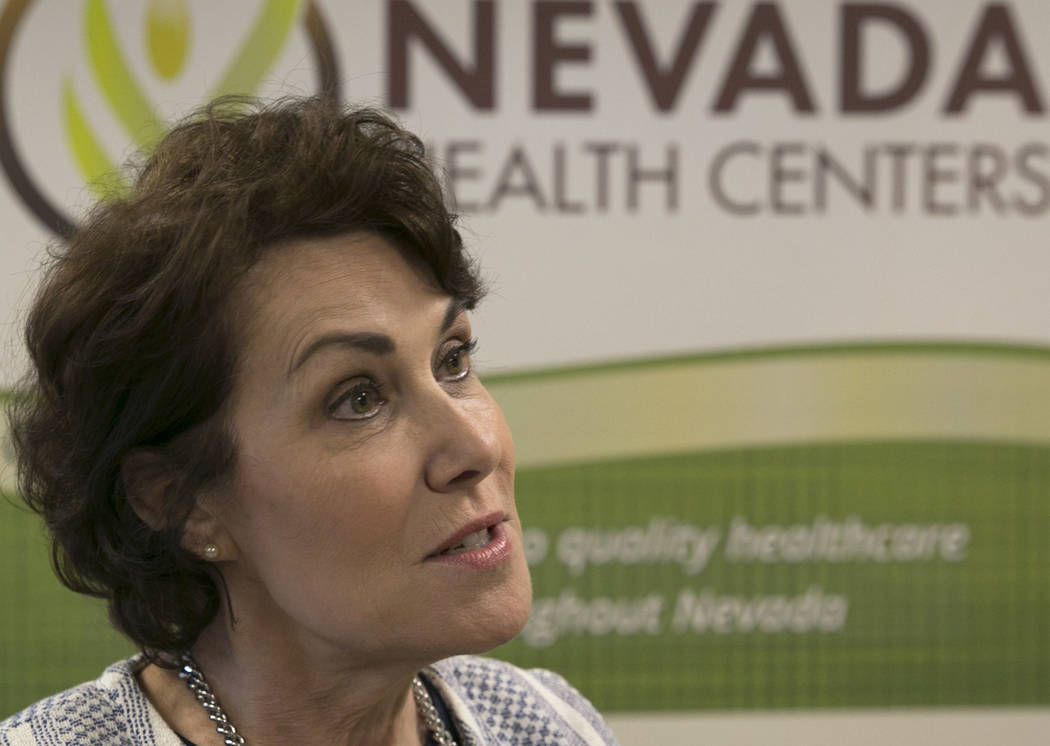 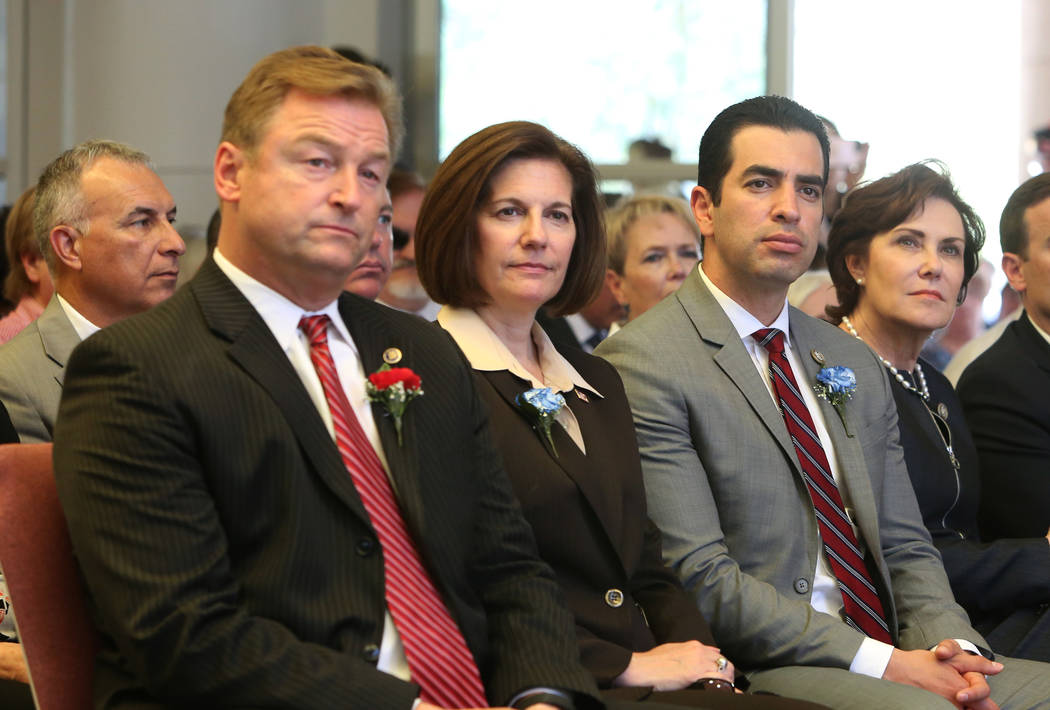 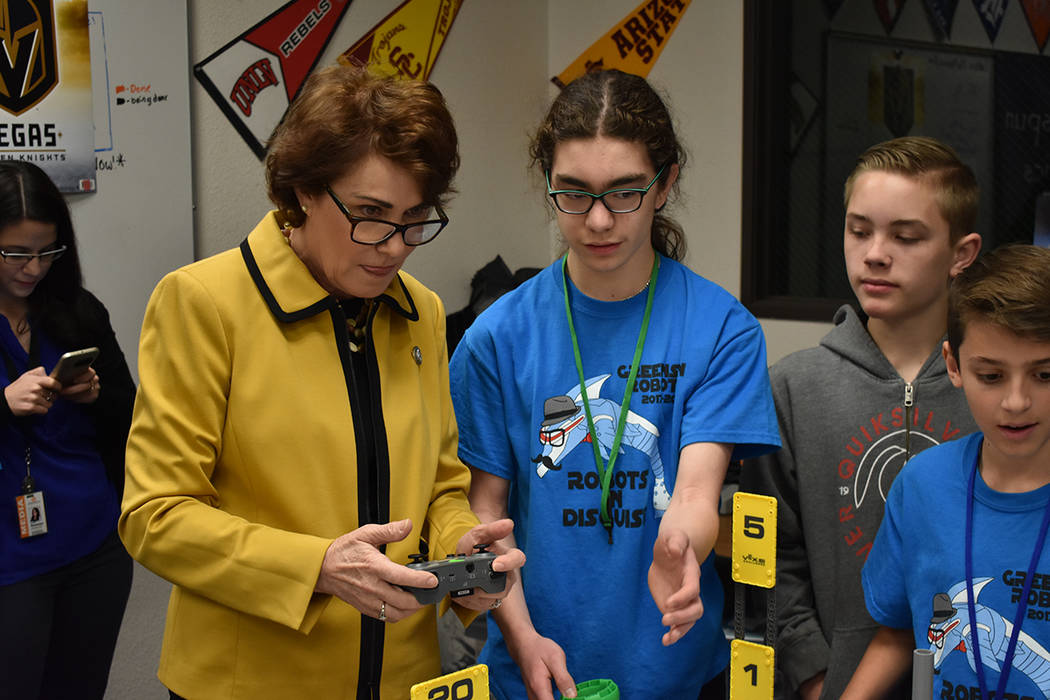 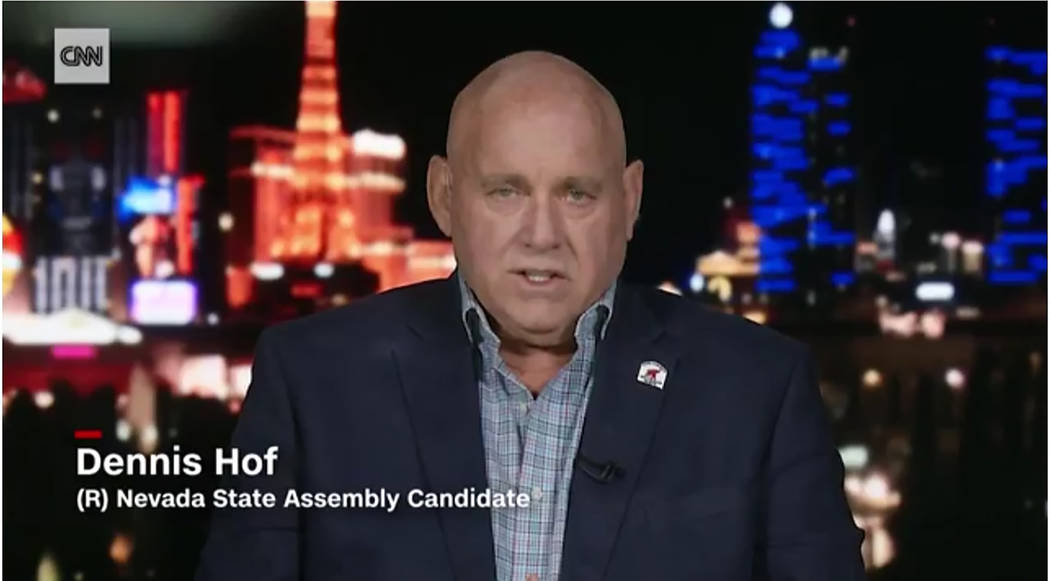 Screenshot/CNN Dennis Hof speaks to CNN in the aftermath of his primary election win June 12. Hof advances to the general eleection. 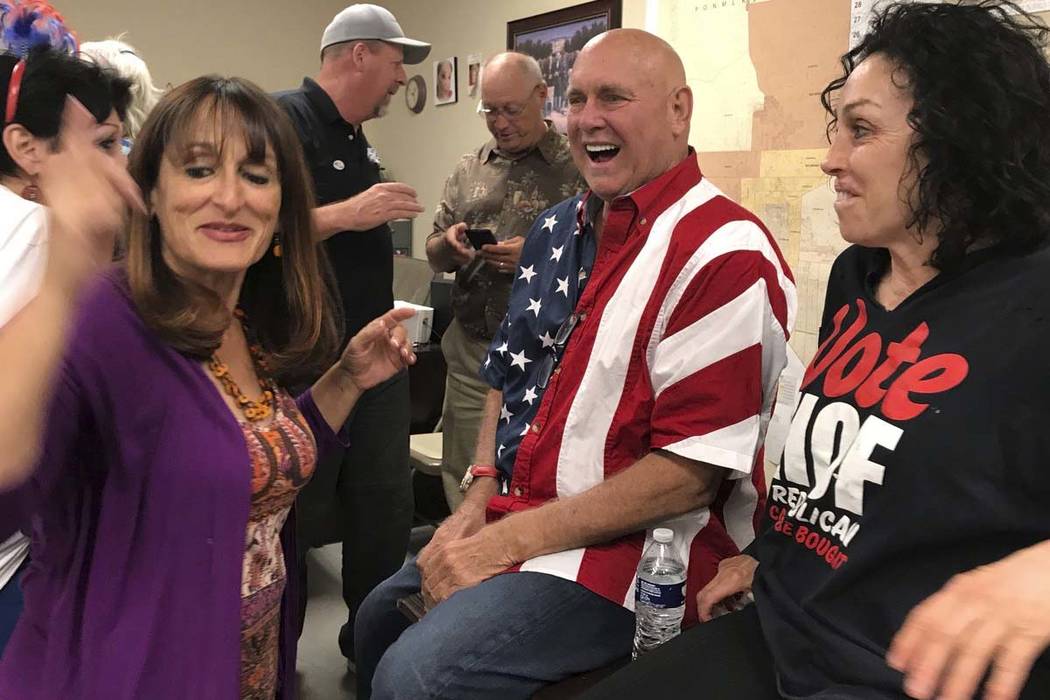 Nevada brothel owner Dennis Hof, second from right, celebrates in Pahrump on Tuesday after winning the primary election. Hof, the owner of half a dozen legal brothels in Nevada and star of the HBO adult reality series "Cathouse," won a Republican primary for the state Legislature on Tuesday, ousting a three-term lawmaker. At right is former madam and reality TV personality Heidi Fleiss. (David Montero /Los Angeles Times via AP) 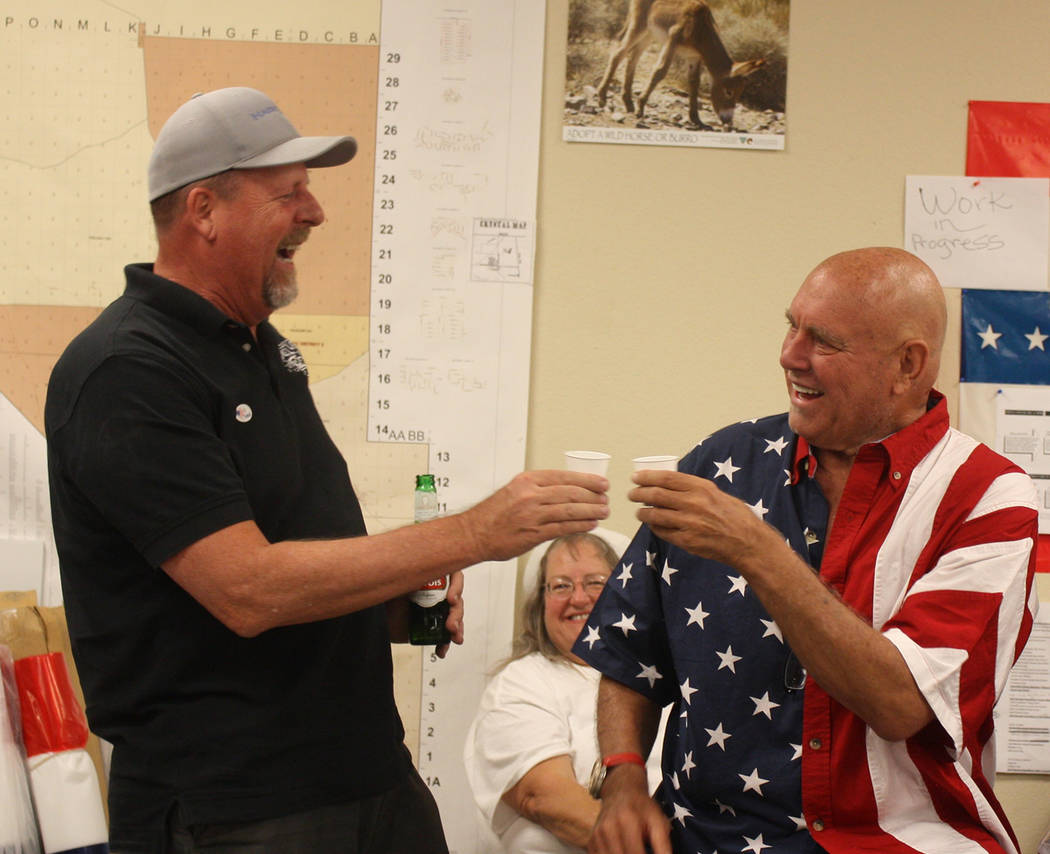 Special to the Pahrump Valley Times Former Nevada Assembly District 36 representative Ed Goedhart is shown congratulating Dennis Hof on his primary election win. Hof is now set to head to the general election in pursuit of the same seat once held by Goedhart.

If you want to understand why Republicans think the news media are biased, contrast how two recent stories were — and weren’t — covered.

Hof’s nomination exposes a tension in the Republican Party — libertarians versus social conservatives — that could have big ramifications in November. On Monday, Nye County Commissioner Donna Cox announced she was withdrawing her endorsement of Laxalt and supporting Ryan Bundy. Bundy, the son of rancher Cliven Bundy, is running for governor as an independent. To win, Laxalt will need to rack up significant support in rural Nevada to offset losses in Clark County. Losing even a few thousand votes to Bundy could cost Laxalt the election.

Throw in the fact that sex sells, and these are all reasons this story is worthy of aggressive coverage, even though Hof is running only for the Assembly in Pahrump.

But this wasn’t the only recent news that could have major electoral implications. Two weeks ago, Sen. Dean Heller’s campaign released video evidence that Rep. Jacky Rosen lied about her résumé by claiming to have a college degree she doesn’t have. Rosen is the Democrat running against Heller for U.S. Senate in one of the country’s highest profile-races.

Wait, you haven’t heard about that the résumé scandal? Not surprising. That’s because the media didn’t cover it, even though Rosen’s fib is on tape. In 1979, Rosen earned a degree in psychology from the University of Minnesota, but here’s what she told CSPAN3 last year.

“When I was in college in Minnesota, I actually got a degree in psychology and in computers, actually learned how to — I’m a computer programmer systems analyst by trade,” said Rosen. Maybe there’s an innocent explanation for why Rosen lied about her background, but her office didn’t return a request for comment.

Résumé inflation can get you fired from high-profile positions. In 2012, Yahoo’s board ousted then-CEO Scott Thompson for falsely claiming he had a computer science degree. Sound familiar?

It’s not just in business. Résumé falsehoods have derailed political ambitions. During his 1987 run for president, Joe Biden lied in a speech about finishing in the top half of law school at Syracuse. The Los Angeles Times online archive features an AP story that ran at the time of the incident, which concludes by asking if Biden’s “candidacy would survive the accusations.” The New York Times also covered the incident in a larger piece on Biden admitting to plagiarism. He dropped out of the race shortly thereafter.

Lena Guerrero was once a rising political star in Texas. She was the first female or Hispanic head of the powerful Railroad Commission. There were rumblings she could one day run for president. Yet you’ve probably never heard of her, because in 1992, it came out that she had lied about earning a college degree. She lost her next election, and Democrats considered her a “pariah.” She never ran for office again.

So why the disparity in coverage between Hof and Rosen? On the merits, it’s baffling. That’s what makes you start thinking about alternative explanations. In a 2013 national survey, just 7 percent of reporters self-identified as Republican. If Heller wins his election, Democrats have no chance of regaining control of the Senate.

Sometimes media bias is blatant. But often, it’s more subtle, like the media passing on telling you about Rosen’s résumé lie that could end her political career.