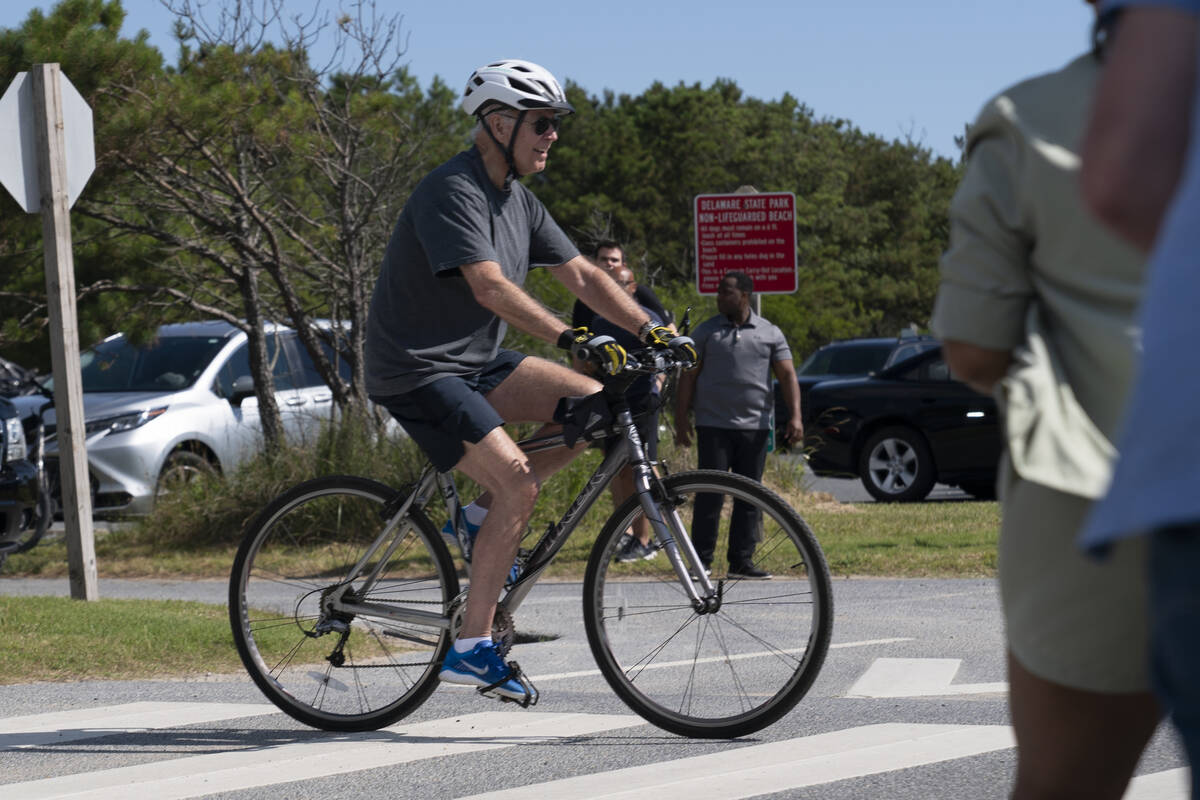 President Joe Biden pedals his bike towards a crowd at Gordons Pond in Rehoboth Beach, Del., Saturday, June 18, 2022. Biden fell from his bike as he tried to get off it to greet the crowd. (AP Photo/Manuel Balce Ceneta)

Hillary Clinton might be Democrats’ best hope of retaining the presidency in 2024. No, that’s not a joke.

The rumblings about President Joe Biden’s age have grown into a dull roar. Republicans have been raising these concerns for years, but the national mainstream media paid them little heed. The subject was generally verboten even as he campaigned from his basement and gave far fewer interviews than previous presidents did.

Now, however, the dam has broken wide open. The New York Times recently did a piece on Democrats whispering that he shouldn’t run for re-election. A major factor is his age. Biden will turn 80 this year.

“The presidency is a monstrously taxing job and the stark reality is the president would be closer to 90 than 80 at the end of a second term, and that would be a major issue,” Democrat strategist David Axelrod said. He continued, “He looks his age and isn’t as agile in front of a camera as he once was.”

He’s not as agile physically, either. Over the weekend, Biden fell off his bicycle as he stopped by a group of people. He has repeatedly stumbled while walking up the stairs of Air Force One. Everyone has clumsy moments. I’m glad mine aren’t caught on camera. But there’s a different level of concern when the person taking a spill is almost 80. He’s also the president, which is possibly the most draining job in the world.

“Joe Biden should not run for re-election in 2024. He is too old,” Mark Leibovich wrote in The Atlantic. Last week, Van Jones speculated on CNN about if Biden is “ready to go” for 2024.

Biden’s age would be less concerning if things were going well. They aren’t. Democrat policies led to high gas prices and soaring inflation. The border is in crisis. Biden surrendered in Afghanistan. Voters have noticed. Biden’s approval rating recently dipped below 40 percent in the Real Clear Politics average.

Running Biden again would be a disaster for Democrats. But the alternatives look even worse. Vice President Kamala Harris is more unpopular than Biden. Transportation Secretary Pete Buttigieg has shown himself incapable of even solving supply chain problems. Sen. Bernie Sanders is still a socialist.

Democrats’ embrace of identity politics presents another problem. Skipping over Harris would lead to cries of “racism” and could depress African American turnout, unless there was an African American nominee. Democrats desperately need Oprah Winfrey or Michelle Obama to run. That doesn’t seem likely though.

That leaves Clinton, a terrible candidate in her own right. But she’s “only” 74, has universal name ID, is popular with black voters and can raise money. She said recently that she won’t be running again, citing Biden’s stated intention to seek re-election. But if he changes course, she could as well. Considering the alternatives, she might be the party’s least bad option. Against Donald Trump, she could even win.

As Republicans delight in Democrats’ disarray, they should consider this takeaway. Don’t nominate someone like Trump, who would have at best a 50-50 chance to beat Clinton. Florida Gov. Ron DeSantis would be a much better option.