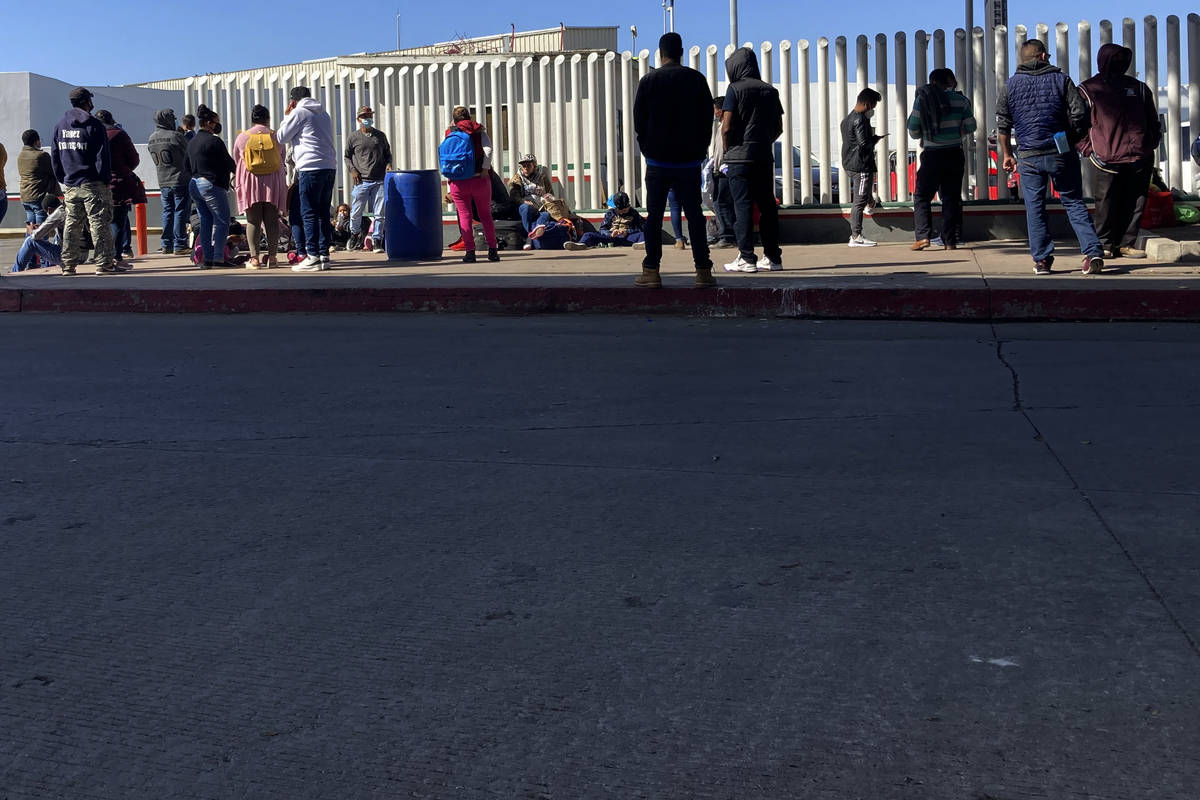 Migrants waiting to cross into the United States wait for news at the border crossing Wednesday, Feb. 17, 2021, in Tijuana, Mexico. (AP Photo/Elliot Spagat)

President Joe Biden is doing a better job selling the merits of Donald Trump’s immigration policies than the former president ever did.

The Biden administration won’t admit it, but the surge of immigrants at the southern border is a crisis. The total number of immigrants is on pace for a 20-year high. The Border Patrol has more than 4,500 children in custody, which is a record. Children are those under 18, which includes many teenagers. The number keeps shooting up, too.

In some facilities, there are children sleeping on the floor. The Border Patrol has run out of mats. Some children are waiting five days or more to take a shower, which sometimes lack soap, according to an AP report. These children are supposed to be transferred to the Department of Health and Human Services within 72 hours. But it has run out of space, too. It has more than 9,500 kids in its care. On Monday, news broke that the federal government wants to use a Dallas convention center as a temporary holding facility for teenagers.

Things are so bad that the Biden administration is refusing to allow journalists to go inside these facilities. It’s going to get worse. The number of immigrants attempting to enter the country usually doesn’t peak for a couple of months.

This is obviously a national crisis. But it also presents a unique political threat to Biden.

To start, it’s pressing. The pork-filled COVID stimulus Biden signed this month may have more dire long-term consequences. But the problems that bill created are unlikely to be fully felt for many years.

In contrast, an overwhelmed border demands an immediate fix. Even the national mainstream media’s willingness to downplay what a disaster this is can shield the president for only so long. If this had been Trump, the “kids in cages” rhetoric would be everywhere. Instead, PBS described the facilities as “jail-like settings.” The Washington Post went with “migrant facility for children.”

Normally, a president could blame his predecessor for any crisis that occurred during his first two months in office. But it’s laughable to contend that Trump is responsible for this when the problem started after he lost the election. The Biden administration is trying, of course, but it’s going to be a losing battle. Democrats and the media spent years attacking Trump for his hard-line immigration policies and rhetoric. You can’t make people forget that just because it would be politically convenient for your side.

The public can see that Biden has laid out the welcome mat for illegal immigrants. He tried to stop deportations. He ended agreements the Trump administration had with other countries that reduced illegal immigration. Current Homeland Security Secretary Alejandro Mayorkas has said that if an unaccompanied child crosses the border, “we will care for that young child and unite that child with a responsible parent.”

On top of this, Biden has a major political problem. His base is divided on his de facto open borders policy — and not how you might think.

“Asking voters whether they lean toward Biden and Trump, and then emphasizing the Democratic position on immigration, often caused Biden’s share of support among Latino respondents to decline,” Democratic poll guru David Shor said in a recent interview with New York magazine.

According to Shor, around 10 percent of Hispanic voters went for Hillary Clinton in 2016 but switched to Trump in 2020. If Biden keeps this up, that might be 20 percent by 2024.

Biden owns the border crisis. If he doesn’t get a handle on it soon, he’ll have a massive political crisis to deal with, too.

Listen to Victor Joecks discuss his columns each Monday at 3 p.m. with Kevin Wall on AM 670 KMZQ Right Talk. Contact him at vjoecks@reviewjournal.com or 702-383-4698. Follow @victorjoecks on Twitter.