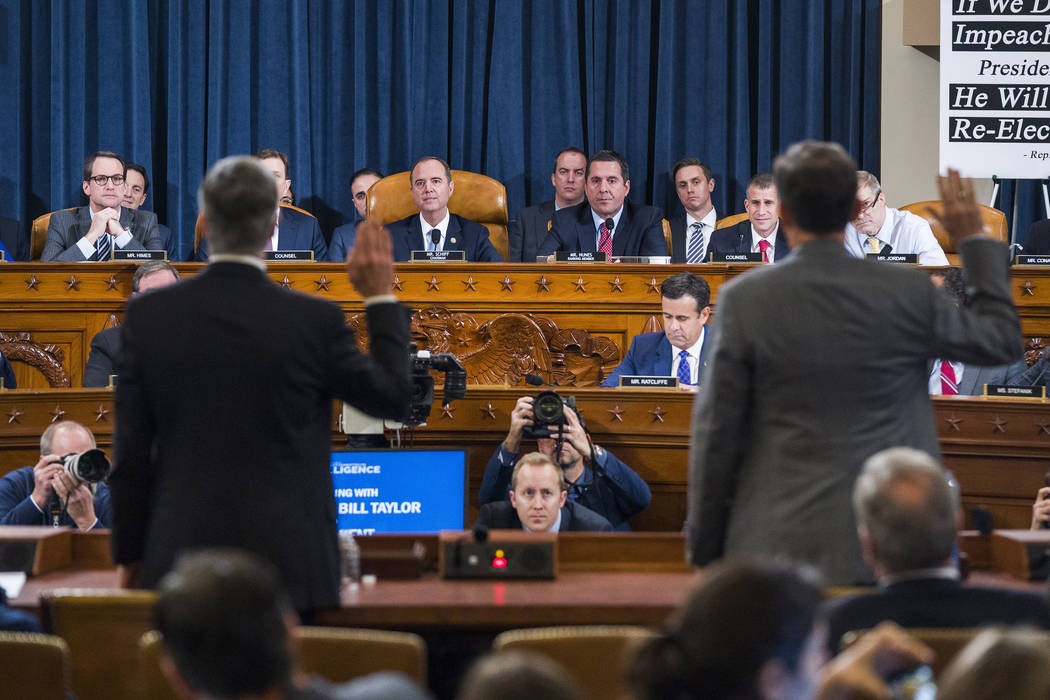 Top U.S. diplomat in Ukraine William Taylor, left, and Career Foreign Service officer George Kent are sworn in prior to testifying before the House Intelligence Committee on Capitol Hill in Washington, Wednesday, Nov. 13, 2019, during the first public impeachment hearing of President Donald Trump's efforts to tie U.S. aid for Ukraine to investigations of his political opponents. (Jim Lo Scalzo/Pool Photo via AP)

If Democrats have proof that President Donald Trump committed an impeachable offense, they’ve done a remarkable job of hiding it.

On Wednesday, Democrats began holding public impeachment proceedings. Here’s their theory: Congress appropriated almost $400 million in military aid to Ukraine. Trump refused to send the aid unless Ukraine investigated Hunter Biden. Hunter is Joe Biden’s son. During the Obama administration, Hunter joined the board of Burisma, a Ukrainian energy company, which was under investigation for corruption. Trump sought this investigation solely to hurt his chief domestic political rival, not as part of an overall anti-corruption effort. Trump is guilty, Democrats contend, of quid pro quo.

That’s a serious charge. In September, Trump released the rough transcript of the call he made with Ukraine president Volodymyr Zelenskiy. Trump asked Zelenskiy to help investigate potential interference in the 2016 U.S. election by some people in Ukraine. He also asked him to determine if Joe Biden improperly used his power as vice president to shut down an investigation into Burisma.

Now, if it was unprecedented for the United States to place conditions on countries receiving foreign aid, that would be strong evidence of a quid pro quo. It’s not — according to one of the two witnesses Democrats called Wednesday.

“There are and always have been conditionality placed on our sovereign loan guarantees for Ukraine,” George Kent, the deputy assistant secretary of state for European and Eurasian affairs, testified. “Conditions include anti-corruption reforms.”

Democrats have an additional problem. Trump never told Zelenskiy he was linking the aid to an investigation. Zelenskiy wasn’t even aware the aid was held up until a month after their call.

Perhaps Burisma and its founder didn’t actually do anything wrong. Kent disagreed. He thought the CEO of Burisma “had stolen money. We thought a prosecutor had taken a bribe to shut down the case.” Further, he still believes the Ukrainian government should investigate the matter. He also thought Hunter serving on Burisma’s board while his father was vice president created “the possibility of a perception of a conflict of interest.” Last month, Kent testified behind closed doors that he raised this concern during the Obama administration, but officials disregarded it.

For context, Joe Biden once bragged about getting Ukraine to fire a prosecutor, who was widely seen as corrupt, by threatening to withhold U.S. aid. That prosecutor had previously opened an investigation into Burisma.

To recap, according to the Democrats’ witness: The United States always conditioned aid to Ukraine on efforts to fight corruption. Burisma and/or its top leaders had been involved in corrupt activities that warrant Ukrainian investigation. Hunter’s service on Burisma’s board looked like a conflict of interest.

Their second witness wasn’t much better. Ukrainian ambassador William Taylor’s supposed “bombshell” was that one of his staffers overheard a phone call. Taylor said the staffer said Trump asked EU Ambassador Gordon Sondland about “the investigations” in Ukraine. That’s irrelevant gossip, not proof of corrupt intent.

Democrats were so excited to conduct an impeachment that they forgot to bring evidence of an impeachable offense.