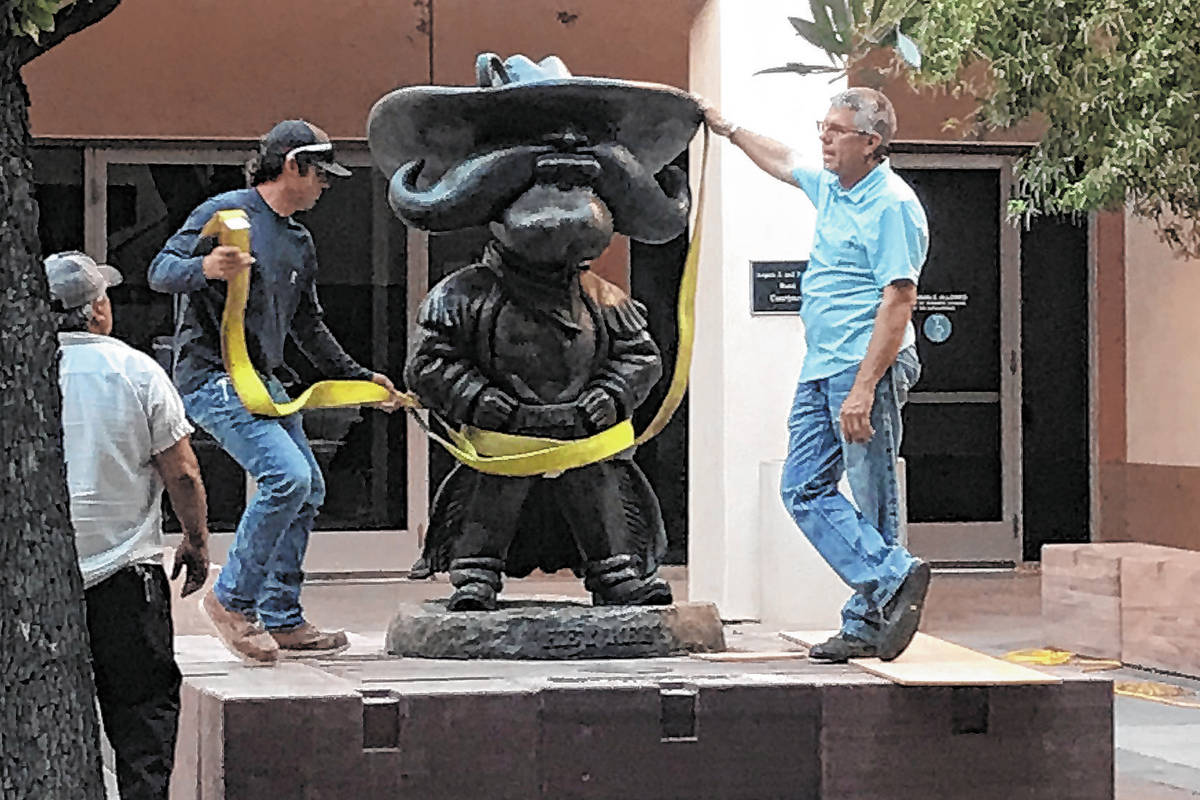 UNLV works to remove the Hey Reb! statue from in front of the Tam Alumni Center on Tuesday, June 16, 2020. (Michael Lyle with Nevada Current)

On Tuesday, UNLV removed a Hey Reb! statute from campus after some students labeled it racist. This likely foreshadows the end for Hey Reb! In a statement, UNLV President Marta Meana indicated that “the future of our mascot” is uncertain.

Initially, UNLV’s “Rebels” nickname directly incorporated elements of the South’s rebellion. In the 1950s, the school wanted to separate itself from the more established University of Nevada, Reno. Its first mascot was a smirking wolf named Beauregard in a Confederate uniform. “While it was a decision based in rivalry and fun, the choice of a Confederate-themed mascot was nonetheless an unfortunate one,” UNLV’s website reads.

In 1976, students eliminated the wolf, but voted to keep the Rebel nickname. In 1982, a local artist created “a character representative of area history that embraced the rebel spirit of defiance and nonconformity.” He drew a mountain man with an oversized hat and mustache.

According to some, the specific actions UNLV took to disassociate its mascot and nickname from the Confederacy aren’t enough.

“UNLV’s current mascot, the ‘Rebel’, is racist and is rooted in a Confederate mythology which has no place on our campus,” a petition to change UNLV’s mascot reads. It continues, “Having a mascot that is inextricably connected to a failed regime whose single aim was to preserve the institution of slavery is an embarrassment to our campus and to our community.”

Leave aside whether you agree or disagree with replacing UNLV’s mascot. If this is the standard, the Democratic Party must be canceled. It has a far more racist history than Hey Reb!

“There is no doubt that the Democratic Party is the party of the Confederacy,” Jesse Jackson Jr., a former Democratic congressman, once said.

After the Civil War, the Ku Klux Klan terrorized black Americans and Republicans to preserve Democratic political power in the South. After the turn of the century, Democratic president Woodrow Wilson screened the pro-KKK film “The Birth of a Nation” at the White House. In the 1920s and 1930s, Democratic senators successfully filibustered anti-lynching legislation. The infamous Bull Connor was a Democrat.

Democrats’ connection to racism isn’t distant history either. In 2010, Joe Biden, the party’s presumptive presidential nominee, eulogized the late Robert Byrd, a longtime Democratic senator and a former KKK member. In 1993, Biden said members of a Confederacy group included “many fine people.” Virginia Gov. Ralph Northam, a Democrat, dressed up either in blackface or a KKK outfit during medical school.

If the UNLV’s “Hey Reb! mascot is irredeemably racist then so is the Democratic Party.