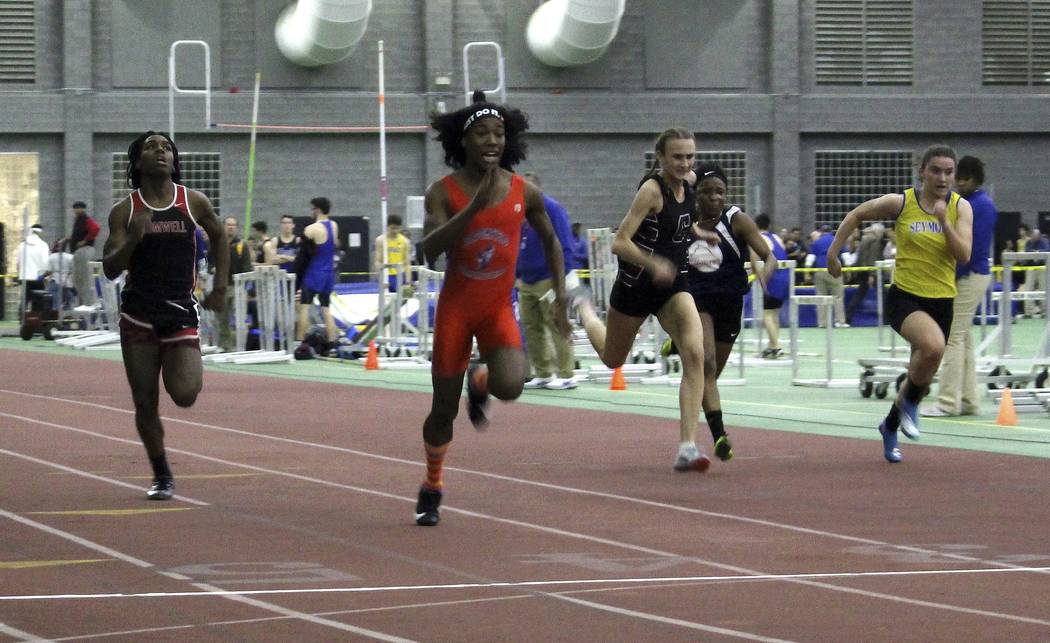 Bloomfield High School transgender athlete Terry Miller, second from left, wins the final of the 55-meter dash over transgender athlete Andraya Yearwood, far left, and other runners in the Connecticut girls Class S indoor track meet at Hillhouse High School in New Haven, Conn., in February 2019. Miller and Yearwood are among Connecticut transgender athletes who would be blocked from participating in girls sports under a federal lawsuit filed Wednesday, Feb. 12, 2020, by the families of three athletes. (AP Photo/Pat Eaton-Robb, File)

Biology necessitates that girls compete against other girls. After puberty, boys become bigger, stronger and faster than girls. On average, men are taller and have twice as much upper body strength as women and 50 percent more strength in their lower bodies. Men have denser bones than women and greater lung capacity. These physical differences give high school boys and men immense advantages in athletics.

Here’s one example. In 1988, Galina Chistyakova of the Soviet Union set the women’s world record for the long jump, at just over 24 feet, 8 inches. Last year, five high school boys in the United States jumped a longer distance.

Despite these realities, every Democratic presidential candidate supports allowing biological males to compete with females in high school and collegiate sports. Each candidate has come out in support of the so-called Equality Act, which, despite its name, would make things very unequal for female athletes. The proposal would add “gender identity” to the list of protected characteristics under the 1964 Civil Rights Act. Last year, every House Democrat voted for this proposal.

If this passed, federal anti-discrimination laws would prevent schools from keeping a biological boy who claims to be a “girl” off the girls’ team. This would grossly unfair to actual girls.

The best weapon supporters of the “Equality” Act have is the media’s willingness to ignore this issue.

“House passes sweeping anti-discrimination bill to expand protections of LGBT people,” a CBS headline read. The New York Times told its readers that bill would extend “civil rights protections to gay and transgender people.” Neither story mentioned that the bill would pave the way for biological males to compete in female sports. Not what comes to mind when someone mentions equality.

It’s almost impossible to overstate how much media bias benefits Democrats. Imagine if the media stopped recycling liberal talking points and featured headlines blasted Democrats for passing a bill that undermines girls’ sports. It’s likely Democrats wouldn’t have voted on it at all, especially knowing it won’t pass the Republican-controlled Senate. If they did, it would be a political albatross for swing district members, such as Rep. Susie Lee.

Some people, including a trans girl running against female track athletes in Connecticut, argue girls can defeat biological boys by practicing harder. It’s true that some girls are faster, stronger or more skilled than some boys. But boys still have inherent biological advantages. This is like arguing that because someone taking performance-enhancing drugs doesn’t always win, PEDs aren’t unfair. In some cases, they may not have provided enough of an advantage to guarantee victory, but PEDs do provide an advantage.

Others try to minimize the issue because there are relatively few transgender athletes. But it’s still unfair to the girls who have to compete against them. And if this is allowed to continue, you’ll see it happen more and more.

That leads to the final argument. Biological boys who say they’re trans girls are actually girls.

“If you are angry or think it’s ‘unfair’ for a trans girl to beat a cis girl in a sporting event, then fundamentally you don’t think trans girls are ‘real’ girls,” Chase Strangio, deputy director for Ttansgender justice with the ACLU, tweeted Monday. “Cis girl” refers to a biological female.

This is the fundamental issue of the transgender debate. Many liberals believe you can choose your gender as you choose which sport to play.