Pre-K has a decadeslong record of failure. Not a good sign, then, that Jesus Jara is pushing for its expansion throughout the Clark County School District.

Last month, the district released a report from its Superintendent’s Student Equity and Access Commission. One of its recommendations was to increase access to pre-K programs. The report claimed that some of the “short-term, positive outcomes of Pre-Kindergarten include improved school-readiness skills (and) higher academic achievement in mathematics and reading.” It also stated, “Participants of early education programs have higher lifetime earnings.”

It sounds nice, but those assertions don’t survive even modest scrutiny. Start with the obvious: Head Start. For decades, the federal government has subsidized pre-K. It spent $9.5 billion on such schooling in 2019. If pre-K worked, Head Start would be producing results. It’s not.

In 2012, the Department of Health and Human Services released a report on third-graders who had participated in the program. It was a random-assignment study of 5,000 students. That’s the gold standard for these types of studies. Going to Head Start produced no statistically significant improvement in reading or math once students reached third grade.

That’s when you’ll hear that children attending pre-K have higher lifetime earnings. The person mindlessly repeating that talking point probably doesn’t know where it comes from. Read on to find out.

In 1962, researchers started the Perry Preschool Project. It consisted of 123 students, with 58 receiving services. That’s a tiny sample. The participants were at risk of “retarded intellectual functioning.” The program included home visits, and every child involved had stay-at-home moms. That’s not what Superintendent Jara means when he talks about pre-K. No wonder the results from other pre-K programs are different and haven’t been replicated in large-scale programs despite decades of trying.

Unfortunately, facts are unlikely to sway the education establishment. Its members have as much blind faith in pre-K as Bernie Sanders’ latte-sipping, iPhone-carrying, Uber-dependent millennial supporters have in socialism.

But even if you believe pre-K works, you still should oppose pre-K expansion in this instance.

“The district does not yet have a systemic mechanism for monitoring the quality of the Pre-K programs currently offered,” the Equity report reads. Ironically, that’s right before the report calls for 100 percent enrollment in pre-K. It says something about the district’s priorities that it wants to expand pre-K before it has ensured that its current programs are high quality.

The district also can’t find enough teachers to put in its classrooms. At his recent State of the Schools speech, Jara said, “There’s less folks going into education, so we have to be creative.” The Equity report calls for more than 12,700 new students to enroll in pre-K. That’s going to require hundreds of teachers the district can’t provide.

Then there’s the issue of physical space. Jara already makes the dubious claim that the district needs $4.1 billion in capital funds. He doesn’t have extra money to pay for hundreds of new classrooms.

A larger problem is that the longer children spend in the district, the worse they do. According to the Nation’s Report Card, 30 percent of district fourth-graders are proficient in reading. By eighth grade, it’s fallen to 27 percent. In math, the proficiency level drops from 33 percent to 24 percent between fourth and eighth grade.

District officials should fix that problem before demanding parents hand their 4-year-olds over to their failure factories. 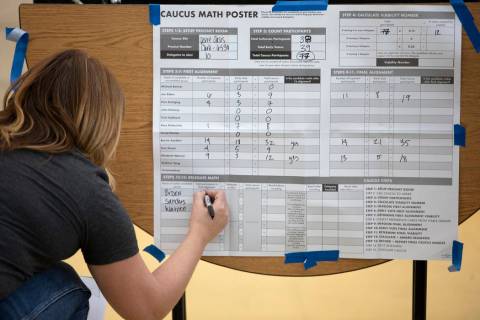 The Nevada Democratic caucuses were so successful that Democrats want to make sure they never happen again. Usually political spin isn’t so obviously self-contradictory.