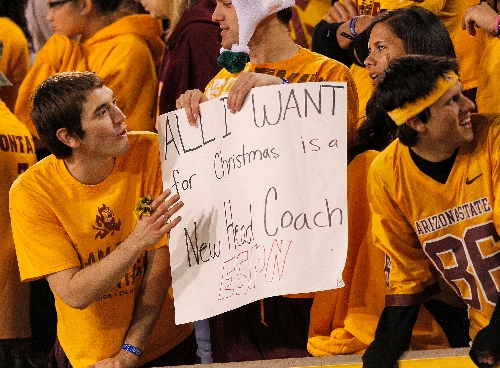 Dennis Erickson is out as Arizona State coach, a university official told The Associated Press, after another season in which the results didn’t meet the expectations for the Sun Devils.

The official spoke on the condition of anonymity on Sunday because details of Erickson’s departure have not been finalized.

Erickson will meet with athletic director Lisa Love as early as today and, at 64, could be allowed to retire rather than be fired. Erickson also could still coach the Sun Devils in their bowl game.

Erickson’s job came into jeopardy after Arizona State lost its final four games following a 6-2 start, knocking the Sun Devils from contention to play in the inaugural Pac-12 championship game Friday. He was 31-30 in five seasons in the desert.

Erickson won a pair of national titles with Miami and had stops at Oregon State and Idaho before arriving in Tempe in 2007. He had an impressive start in the desert, being named the Pac-10 coach of the year after leading the Sun Devils to the Holiday Bowl and their first 10-win season in nine years.

That turned out to be the highlight of his tenure.

Arizona State won no more than six games the next three years, ineligible for a bowl last season because two of its games were against Football Championship Subdivision schools.

Love opted to stick with Erickson despite three straight shaky seasons and the Sun Devils went into this year with high expectations, returning 19 starters.

Arizona State looked good early, taking control of the Pac-12 South after its first eight games, then went into a tailspin, including losses to struggling Colorado and Arizona.

Illinois started 6-0 but finished with a six-game losing streak, capped by a 27-7 setback at Minnesota on Saturday.

According to STATS, LLC, the Illini are the first Football Bowl Subdivision team to open the regular season with six straight wins and close it with six losses in a row.

Zook took the Illini to their first Rose Bowl since the 1980s and last season led the team to its first bowl win in more than a decade. The strong start this season had fans thinking they could contend in the Big Ten, and the Illini could still go to a bowl game.

But Zook also had five losing seasons at Illinois — finishing with a 34-51 record — and leaves the Illini after a year in which their only Big Ten wins were against Northwestern and Indiana.

■ KANSAS – Turner Gill arrived at the school after taking a perennially downtrodden program at Buffalo to unimaginable heights. He’s leaving after a two-year stretch in which the Jayhawks slipped back to their familiar place in the Big 12 cellar.

Gill was fired after a meeting with athletic director Sheahon Zenger, one day after the Jayhawks lost 24-10 to rival Missouri and finished the season 2-10.

Gill was hired by Zenger’s predecessor, Lew Perkins, and given a five-year, $10 million contract that was befitting of a high-profile coach. But he never lived up to the expectations that came with it, losing the first game he coached at Kansas to lower-division North Dakota State.

The university announced Porter’s dismissal in a release. Porter’s firing came just hours after Saturday’s 44-7 loss at Southern Mississippi, leaving the Tigers 2-10 this season. Fan interest in the program has been diminishing, including an estimated 2,500 for the Tigers’ home finale against Marshall on Nov. 17. That increased pressure for a change.

He came to Memphis after spending five years on the Louisiana State coaching staff under Les Miles, where he had a reputation as one of the top recruiters in the nation.

■ UCLA — Coach Rick Neuheisel said believes he deserves to keep his job. He also realizes many fans won’t agree unless the Bruins manage an enormous upset in the Pac-12 title game.

One day after No. 9 Southern California’s 50-0 destruction of its crosstown rival, the Bruins (6-6, 5-4 Pac-12) began preparations for a visit to Oregon amid fresh uncertainty about Neuheisel’s future. The Bruins backed into the league’s inaugural title game despite finishing two games behind postseason-banned USC in the Pac-12 South standings, and the UCLA campus is rife with rumors Neuheisel will be fired after Friday’s game at Autzen Stadium.

■ ALABAMA-BIRMINGHAM — Neil Callaway resigned as coach after failing to post a winning record in five seasons.

Athletic director Brian Mackin announced the move a day after the Blazers finished 3-9 with a 38-35 loss to previously winless Florida Atlantic. In Callaway’s five seasons as coach, the Blazers went 18-42.

■ FLORIDA — Backup linebacker Darrin Kitchens was released from a hospital after being diagnosed with a concussion.

The sophomore was injured on a kickoff during Saturday night’s loss against rival Florida State. He was strapped to a backboard, carted off the field and taken by ambulance to a hospital for evaluation.

The helmet-to-helmet hit left him motionless for more than 10 minutes as team trainers and paramedics stabilized his neck. All tests were negative for a neck injury.