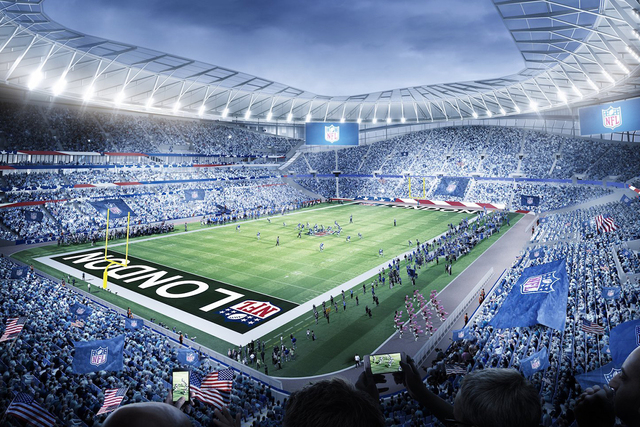 The NFL announced Tuesday, July 7, 2015, that it agreed to a 10-year deal with Tottenham Hotspur to hold two games per year at the Premier League soccer club's new stadium. The games will begin in 2018. (CNN)

The NFL announced Tuesday that it has agreed a 10-year deal with Tottenham Hotspur to hold two games a year at the Premier League soccer club’s new stadium from 2018.

Tottenham, based in north London, is planning to finish the construction of its new $615 million stadium — which will have a capacity of 61,000 — in time for the 2018-19 season.

London’s Wembley Stadium has held NFL matches since 2007, with games selling out regularly, giving encouragement to those who want an NFL franchise based in the UK capital.

“With growing enthusiasm for the NFL in the United Kingdom, we are committed to hosting NFL games in world-class venues and are excited to partner with Tottenham Hotspur to play games at their future stadium,” NFL Commissioner Roger Goodell said in a statement.

“We share a vision and commitment to creating the best experience for our teams, fans and the local community.”

On top of the two games played at Tottenham’s new stadium, other games are expected to take place across the United Kingdom.

The NFL still has two seasons remaining on its current deal with Wembley, at which it has staged 11 games in the past eight years, and it could extend that deal further.

Tottenham’s new ground will include a retractable grass field and an artificial surface underneath which would be used only for NFL games.

“Anyone who has seen American Football at Wembley Stadium cannot fail to have been thrilled by the spectacle, and the wise heads that run the NFL have clearly not missed the fact that Londoners are going absolutely gangbusters for gridiron,” London mayor Boris Johnson said in a statement.

“We are already working very closely with the NFL, including on plans to get more Londoners involved in the sport, and we believe that building on the success of NFL at Wembley by staging more games in an area of the city that has been earmarked for a massive program of economic regeneration and investment makes perfect sense.

“Touchdowns in Tottenham can only add to our reputation as a global sporting powerhouse, and help us take another step towards our goal of having a permanent NFL franchise here in London.”

Since NFL began hosting matches in the UK, more than 900,000 people have attended the 11 games.

According to statistics provided by the NFL, attendances at games held in London have averaged 83,000 while television audiences in the UK have soared over the past six years.

Wembley will host three more NFL games this year, with the New York Jets taking on the Miami Dolphins on October 4.