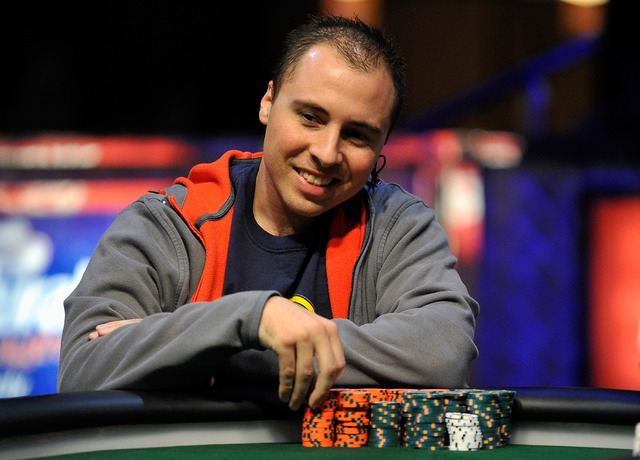 Jonathan Dimmig, of Amherst, N.Y., ponders his bet during the final table of the Millionaire Maker event at the World Series of Poker tournament at the Rio hotel-casino on Tuesday, June 3, 2014. (David Becker/Las Vegas Review-Journal) 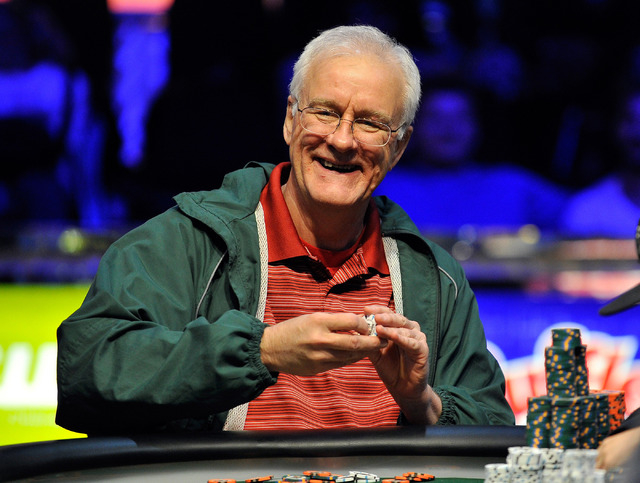 James Duke, of Houston, Texas, smiles after winning a hand during the final table of the Millionaire Maker event at the World Series of Poker tournament at the Rio hotel-casino on Tuesday, June 3, 2014. (David Becker/Las Vegas Review-Journal) 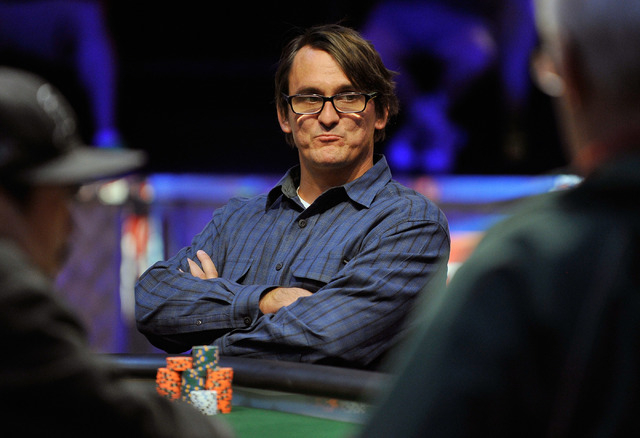 Jeff Coburn, of Chino Hills, Calif., looks on during the final table of the Millionaire Maker event at the World Series of Poker tournament at the Rio hotel-casino on Tuesday, June 3, 2014. (David Becker/Las Vegas Review-Journal)

Dimmig defeated Jeffrey Coburn of Chino Hills, Calif., after only six hands of heads-up play in the $1,500 buy-in Single Re-Entry No-Limit Hold ’em tournament, which features a guaranteed $1 million to the winner.

Dimmig was all-in for his tournament life five times during a topsy-turvy final table before he eliminated Coburn at 12:18 a.m., more than 11 hours after play started. Dimmig doubled up on the first hand of heads-up play, and on the final hand, his pair of 2s bested Coburn’s king-high.

“It’s never easy with me. I don’t sit back and wait,” Dimmig said. “I noticed a couple other guys come into the final table, and even before that, were just trying to get up the money ladder. I just don’t think like that. This is a life-changing event. I don’t want to look back in 30 years and say ‘What if?’

“Something that can change your life forever? You’ve got to go for it. It’s a once-in-a-lifetime experience, and this is the only place where you can do that, is the WSOP. That’s what my outlook was.”

Coburn started the final table as one of the shortest stacks but came away with almost $816,000 for finishing second.

James Duke of Houston, who held more than 40 percent of the tournament chips in play at the dinner break, finished third and earned almost $615,000. Duke lost a large portion of his chips shortly after 11 p.m. when Dimmig was all-in and made a straight on the river (fifth) card. He was eliminated by Dimmig less than an hour later.

The four-day tournament had a record 7,977 entrants and generated a total prize pool of more than $10.7 million. It is the second-largest field in WSOP history, behind only the 2006 Main Event with 8,773 players.

Dimmig, wearing a blue Buffalo Sabres T-shirt, had several friends and family gathered in attendance at the Amazon Ballroom and they chanted “Let’s go, Buffalo!” whenever Dimmig won a big pot. Dimmig doubled his stack through Duke on the final hand before the one-hour dinner break, which ended at approximately 9:15 p.m.

Dimmig then eliminated Andrew Teng of London in fourth place about 30 minutes after play resumed.

Stephen Graner of Henderson opened the nine-handed final table with more than one-third of the chips in play, but lost the chip lead to Duke on the third hand of action. It was a sign of things to come as the chip lead has switched hands several times during the final table.

Graner was knocked out in sixth place by Dimmig, who gained the chip lead as a result. But Dimmig bluffed almost two-thirds of his stack against Coburn on Hand No. 92 and then doubled up against Bradley Anderson on Hand No. 93, leaving him short-stacked for a large portion of the evening.

On the next hand, Anderson went out in fifth place when Duke made a full house, giving him a commanding chip advantage.

* It was the sixth career gold bracelet for Forrest and denied Phil Hellmuth his WSOP-record 14th bracelet.