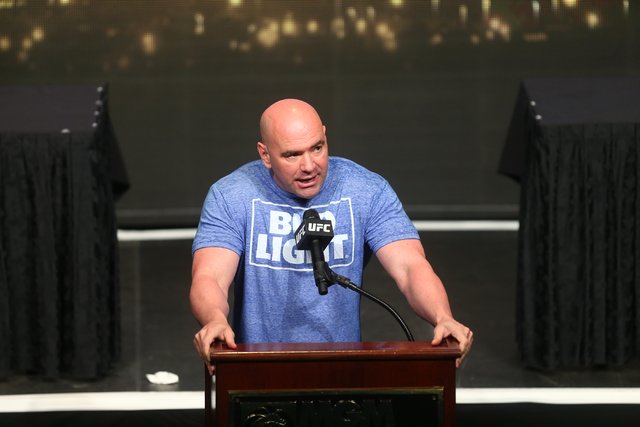 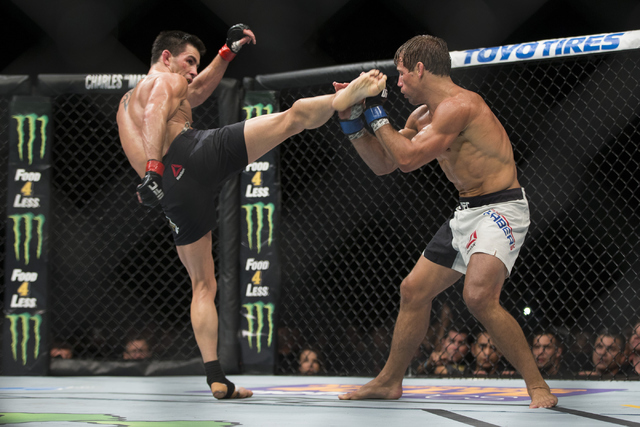 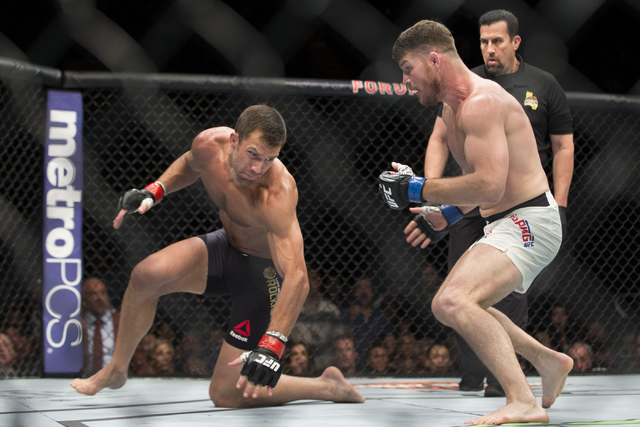 Michael Bisping, right, goes after Luke Rockhold after knocking him down in the UFC 199 middleweight title bout at The Forum on Saturday, June 4, 2016, in Inglewood, Calif. Bisping won by way of knockout in the first round. Erik Verduzco/Las Vegas Review-Journal Follow @Erik_Verduzco

UFC officials reversed a ban Monday night on three journalists who were escorted from The Forum in Inglewood, California, on Saturday before the main event of UFC 199.

MMAFighting.com’s Ariel Helwani detailed his ouster from the arena before the main event during a two-hour webcast Monday.

Helwani, one of the most prominent journalists who regularly covers mixed martial arts, was escorted out of the arena and told he no longer would be credentialed by the UFC.

His videographer, Casey Leydon, and his photographer, Esther Lin, also were ushered out and informed they would be banned.

Shortly before 8 p.m. Monday, the organization issued a statement declaring the situation had been resolved.

“Following a conversation with the editorial team at SB Nation, UFC will not prevent MMAFighting.com from receiving media credentials to cover live UFC events,” the statement read. “We respect the role the media plays in our sport and beyond, including MMAFighting’s ability to report news. However, in our opinion, we believe the recurring tactics used by its lead reporter extended beyond the purpose of journalism. We feel confident our position has now been adequately communicated to the SB Nation editorial team.”

The issue largely stemmed from Helwani’s report around 5 p.m. Saturday that the UFC was close to finalizing a deal to bring Brock Lesnar out of retirement to fight at UFC 200 on July 9 at T-Mobile Arena. The organization planned to reveal the news with a promotional video during the pay-per-view broadcast later in the evening.

White declined to comment on the story, but did speak briefly to TMZ earlier Monday.

“He can cover all the events he wants; he just can’t have a credential,” White told the website.

White indicated at the time the policy would remain in place as long as he was with the organization. That changed with the decision Monday night.

“UFC’s goal as the world’s leading mixed martial arts promotion is to cultivate interest in its world-class athletes and events, and deliver for the fans,” the statement read. “We will continue to introduce this sport and its athletes to new fans across the world, and we will do so by working alongside media across all platforms.”

UFC vice president of public relations Dave Sholler said Saturday it was not “wholly accurate” to say Helwani was banned for scooping the UFC on the Lesnar news.

UFC officials indicated part of the problem was that Helwani didn’t seek comment before posting the story, and that this was not an isolated incident with him.

Helwani said on his webcast the UFC also thinks he is working with a mole inside the organization to gather information.

YOU DON’T KNOW BO — Lesnar made a claim during a Monday appearance on ESPN that was sure to ruffle the feathers of traditional sports fans.

Lesnar is the star of professional wrestling and a former UFC heavyweight champion. Jackson was a star in the NFL and Major League Baseball.

“There’s only one Bo Jackson,” the team posted.