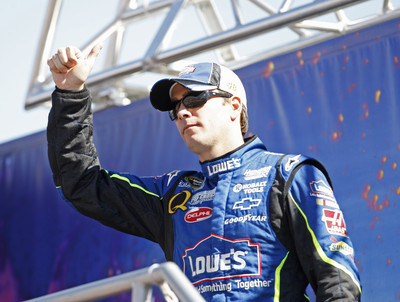 Quick to get out of Las Vegas.

Of course, Johnson isn’t the first person to experience success here — and bask in the mercurial glory of it — only to then hightail it out of town like the Roadrunner when the coin in his pockets suddenly is replaced by lint.

But c’mon, Jimmie, a comment? A word? Even a forearm shiver, like the one I got from the bodyguard for Tony Stewart when I tried to approach that hot-tempered racer after he flamed out late in a NASCAR Sprint Cup race at Las Vegas Motor Speedway several years ago?

Any explanation as to what went wrong Sunday? Any thought, Jimmie, about your incredible Las Vegas run coming to an inglorious end with a plodding 29th-place finish in a car that was tighter than Joan Rivers’ face?

Now where am I going to buy my hammer and nails, after first being stiff-armed by the burly hired help of Home Depot’s Stewart and then being stiffed by Lowe’s Johnson?

"I’m sorry, he’s already gone," Johnson’s public relations person said when approached at the team’s hauler no more than five minutes after the 32-year-old racer had parked his car. "He had to go."

He was just "going" a few minutes earlier, albeit not as fast as he would have liked. Please, shouldn’t the three-time defending champion of a Cup race wait around long enough to take a few questions?

OK, this simply wasn’t Johnson’s day, or weekend. His No. 48 Hendrick Motorsports Chevrolet qualified 33rd on Friday — some 3-plus mph behind pole-sitter Kyle Busch — meaning the defending Cup series champion the past two years would be supremely tested to get his car into contention Sunday, let alone race it to victory over 400 miles.

Another Las Vegas win — to become the first driver since Jeff Gordon at Darlington, S.C., from 1995-98, to capture the same race four consecutive years — was highly improbable, if not impossible.

Johnson certainly was more forthcoming, and definitely prescient, on Friday when he said, "This hasn’t (traditionally) been a race I’ve gone into saying, ‘All right, we’re in our stride right now, and we’re going to win in Las Vegas.’ It’s just worked out that way. … Anyone who’s ever been to Vegas will tell you you’ve got to have some luck on your side, too."

Johnson and his team couldn’t hit their stride this weekend. And luck was more than a few numbers off at this roulette wheel of a sport.

The 5-to-1 betting favorite wallowed between 22nd and 38th for most of the day, the exception being for a few early laps when he ascended to 11th after the race leaders pitted. It wasn’t long, though, before Johnson found himself a lap down, and then two, and then just completing a leisurely Sunday drive at a NASCAR-leisurely speed of 160 mph as Carl Edwards was outrunning Dale Earnhardt Jr. to the checkered flag.

Oh, how the mighty had fallen. Literally.

There were media pit reports of air pressure problems and chassis adjustments and things just not going well for a driver and team who seemingly always have things go well. Especially in Las Vegas, where Johnson’s worst finish had been 16th and his average finish in six races had been sixth.

A report from the driver himself just wasn’t coming. Not this day.

Admittedly, the start to this season has been frustrating for the North Carolina resident. Johnson sat on the pole at Daytona but finished 27th. He sat on the pole at Fontana and finished second. This week, the bottom fell out both in qualifying and racing.

Nothing drives a racer crazier than inconsistency. Hanging at the end of a technical yo-yo from week to week is as aggravating as it is confounding.

Maybe Johnson was worried once the race was over Sunday and he had returned to his hauler that he would bite through his tongue if he gave an honest assessment of how poorly set up his car was this weekend. Or perhaps he was waiting to address it with his race team in private.

Jimmie Johnson had to go.