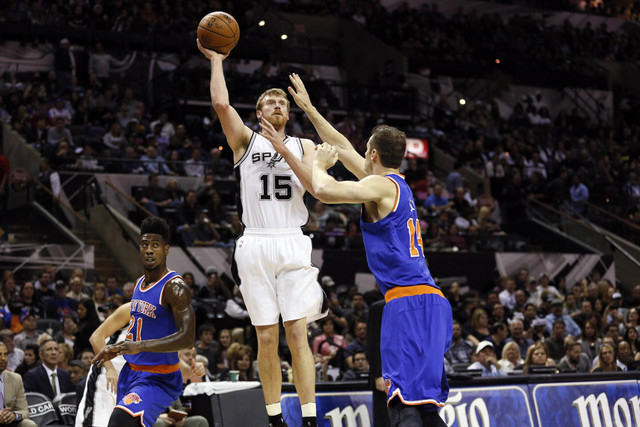 Matt Bonner is the San Antonio Spurs’ resident comedian, but the sharpshooter known as “The Red Mamba” was apparently dead serious when he blamed his shooting woes from this past season on a case of tennis elbow caused by his iPhone 6 Plus.

“Everybody is going to find this hilarious, but here’s my theory on how I got it,” he told the Concord (N.H.) Monitor. “When the new iPhone came out it was way bigger than the last one, and I think because I got that new phone it was a strain to use it, you have to stretch further to hit the buttons, and I honestly think that’s how I ended up developing it.”

When you stop laughing, consider that Bonner said he spoke with one of the Spurs’ strength and conditioning coaches about the injury and the coach reported that he had suffered a similar injury after spending too much time playing a game on his phone.

A career 41.4 percent shooter from 3-point range, Bonner’s average beyond the arc dipped to 36.5 percent last season. Bonner offered no explanation for his off year until he recently gave one to his hometown newspaper.

“You’re about to get an exclusive here,” Bonner said. “I hate to make excuses, I was raised to never make excuses, but I went through a two-and-a-half month stretch where I had really bad tennis elbow, and during that stretch it made it so painful for me to shoot I’d almost be cringing before I even caught the ball like, ‘Oh, this is going to kill.’ ”

“I really don’t want to say that’s why my percentage dipped, but I’m not too worried about it,” Bonner said. “I know I can still shoot.”

A free agent after playing nine seasons for the Spurs, the 35-year-old Bonner might want to borrow my mother’s flip phone until he signs a new contract.

While his iPhone 6 Plus tennis elbow injury might be Bonner’s best comedy bit yet, he’s also starred in the “Fundamentals of the Game with Coach B” web series; an episode of “Wrappin With The Red Mamba,” in which the sandwich enthusiast looks for tasty wraps with rappers; and, most recently, a “Spurs! by Spuran Spuran” music video featuring San Antonio’s Kawhi Leonard and Patty Mills.