How appropriate that the 51s played their 25th home opener at Cashman Field one day after it was announced Goodman was not invited to the NBA’s Board of Governors meeting next week to discuss his proposal for a Las Vegas franchise.

There is a message in there somewhere — aside from David Stern and NBA owners fearing Goodman might not stop talking if he was invited to their New York meeting — but is the third-term mayor too blinded by his dreams of bringing major league sports here to realize it?

An update on Goodman’s relentless quest to get anyone in the NBA to toss a favorable glance toward Southern Nevada: Please, no more updates. No more speculation. No more useless comments. The NBA isn’t going to give Las Vegas a second thought until a legitimate proposal on building a new arena is unveiled and dirt is moved, which at this rate should happen around the time the 51s roll out plans for their golden anniversary.

Until then — until we see actual specifics about all those mysterious private investors interested in financing an arena (fantasy) and how such a project won’t cost you a dime (BIG fantasy), Goodman should make good on his word and immediately address the 51s and their dreadful facility.

He needs to cross over to the reality side of the ledger and work with Logan and the relic that is Cashman, where the team’s president/general manager is probably still waiting in line to use the bathroom.

“I think Oscar is smart enough to do the right thing,” Logan said. “He is very bright. But a major league sport coming here is not going to be on his watch. That’s reality. When it comes, he will have been the guy who really got it going by giving it the first big push. That will be part of his legacy. He will understand that. In the meantime, you have us and he should take care of that.

“I would like to dunk a basketball backward, but at some point, you have to be realistic about things. We have been as big a part of the community as any team has been and probably as big as any business.”

Padding gate numbers happen in every sport at every level. It’s more common than the national anthem. But a quarter-century worth of curiosity — however niche the fan base is — suggests serious attention should be paid to discovering funds to build the 51s a facility where beer lines don’t stretch to Summerlin and the nearest suite isn’t at a casino miles down the road.

Is it wrong or just really sad when the Bobby Sox field where your daughter plays softball on Saturday is better than the Triple-A field you laugh at Friday?

They had the right idea in Memphis. The best thing they ever did was build AutoZone ballpark for the Triple-A Cardinals. It revitalized the downtown area. Soon after, the NBA followed.

It’s true that Las Vegas isn’t Memphis, where the entertainment dollar is often split between those Graceland tours and barbecue at Rendezvous. Any ballpark here — estimated price tag: $40 million — would have to be lavish enough to lure locals away from the tables for four hours each night and versatile enough to host events (soccer matches?) other than baseball.

But the 51s are real. They aren’t going anywhere. There isn’t an ounce of fantasy about them.

“I live in this world every day,” Logan said. “There is a lot of competition for the entertainment dollar. But baseball has survived here for 25 years.”

But until Stern and the NBA are at least interested in hearing him speak (which could take, oh, forever), he needs to address the reality that shakes and rattles and nearly collapses in front of him.

Fantasies are nice, but how often do you really end up with the showgirl? 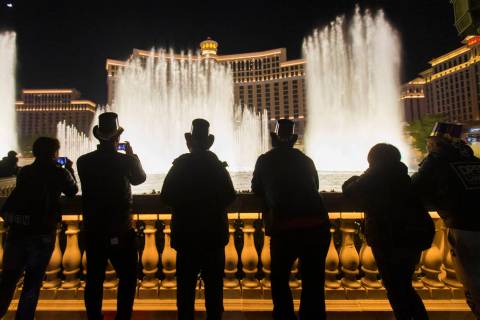