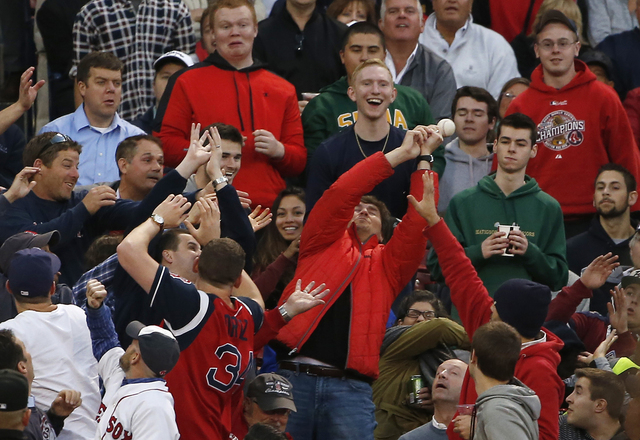 Fans at Fenway Park try to catch a foul ball during the fourth inning of the game between the Boston Red Sox and the Texas Rangers on May 20, 2015. (Winslow Townson-USA TODAY Sports)

It would easy if this were investment markets. The element of risk/reward is common in the financial world.

It’s not as simple with flying bats and screaming line drives.

How much is your life worth, anyway?

Major League Baseball was reminded Friday in the most terrifying of ways that with each pitch exists the potential for catastrophe, and yet there is a way to prevent the sort of ugly scene we saw in Boston.

The hard part is convincing those in power that safety should come before ambiance, health before atmosphere.

A woman was seriously injured when struck in the head by a shattered bat as she sat near the field between home plate and the third-base dugout, which at Fenway Park means sitting much closer to those hitting than other venues around the majors.

It’s one of those traits that makes the home of the Green Monster unique.

That, and it’s where Ben Affleck pulled off a pretty big heist in an underappreciated flick called “The Town.”

In its statement following the incident Friday, since which the woman’s condition has been upgraded from serious to fair at a Boston hospital, MLB reiterated its stance that fan safety is its foremost goal.

Well, to a point.

During the last two rounds of negotiating a collective bargaining agreement, players argued in favor of additional protective netting to extend down both foul lines, even as much as to the foul pole. They don’t wield bats in today’s game as much as weapons. Bigger, stronger, and all that good stuff.

But owners have countered each time with a predictable response: More netting would upset those fans who pay the highest ticket prices. They will lose access to players, to the potential for autographs. They would lose one of baseball’s most endearing qualities. Its intimacy.

Funny. It doesn’t seem to bother those sitting directly behind the plate and under netting.

But, for now, the bottom line of a billionaire’s wallet continues to win out.

Or, when you see those frightening pictures of Tonya Carpenter’s bloodied face from Friday, loses.

Some numbers to ponder: More than 1,700 spectators are injured by batted balls each year, while 53,000 foul balls enter the stands annually.

That’s a whole lot of opportunity for bad things to occur.

“I think what happened in Boston was a freak accident, given it was a bat and not a foul ball,” said Don Logan, president of the Las Vegas 51s. “I cringe every time a ball goes into the stands. But at what point does the amount of netting you have become unreasonable and take away from watching the game? I would think there is some sort of netting like fish line, heavy-duty stuff that might not be as obtrusive vision-wise for fans. But there are a lot of fans who just don’t want to sit behind a net and have an obstructive view. More netting means more poles.

“But we all answer to the commissioner’s office. The cost would never be an issue if more netting is something that becomes mandated. It would be done. But it’s not something we as a group (at the Triple-A level) have ever even discussed.”

They should, and that mandate should come at all levels of professional baseball.

I know all about warnings on the back of tickets and on signs hanging in ballparks and from those players and security guards who remind fans about the dangers of not focusing on the game when sitting so close to the action.

I also know it’s 2015 and our attention span is that of a fruit fly, that life is about the next text or call or alert to come from our smartphone.

People at games are talking, eating, helping their fidgety children get settled.

One pitch. One swing. One blink. One text. One instant in time.

That’s all it takes for a nice evening at the ballpark with family and friends to turn to a bloodied mess and near-tragedy.

In 1970, a foul ball off the bat of Manny Mota struck and killed a 14-year old boy at Dodger Stadium. It is, thankfully, the only such recorded fatality at a big league ballpark. Forty-five years later and considering how the equipment in baseball and those bodies pitching and hitting have changed, it’s still too many.

They have extended netting in Japanese baseball. Works fine there. The National Hockey League, in response to a 2002 incident in which a 13-year old girl was killed when struck with a puck, installed netting behind the goal line in all its arenas.

Major League Baseball needs to be more proactive and follow the lead of others.

“It’s definitely something to think about, especially with the little ones,” said John Powell, who with wife Ashley and their two small children sat in the first row between home plate and third base for the 51s game at Cashman Field on Monday. “We were here on opening night when a lady got hit (with a foul ball behind home plate) and the paramedics took her out.”

They also took 44-year-old Tonya Carpenter out of Fenway Park on Friday after she was struck in the head by the broken bat of Oakland A’s infielder Brett Lawrie, who spent time here with the 51s in 2011. They strapped her to a gurney and rushed her to the hospital, where her condition at first was termed “life threatening.”

Her recovery will take months.

“When you have an issue like this, an incident like this, you have to go back and re-evaluate where you are on all of your safety issues and trust me, we will do that,” commissioner Rob Manfred told reporters before the amateur draft on Monday.

Managers and coaches want this.

Enough with the fan experience.

Start protecting better those who pay your highest ticket prices. Prove those statements about safety are more than just words.

This was the sign directly in front of the seat where Carpenter sat at Fenway Park:

A ton of risk.

Las Vegas Review-Journal sports columnist Ed Graney can be reached at egraney@reviewjournal.com or 702-383-4618. He can be a heard on, “Seat and Ed,” on KRLV 1340 from 2 p.m. to 4 p.m. Monday through Friday. Follow him on Twitter: @edgraney