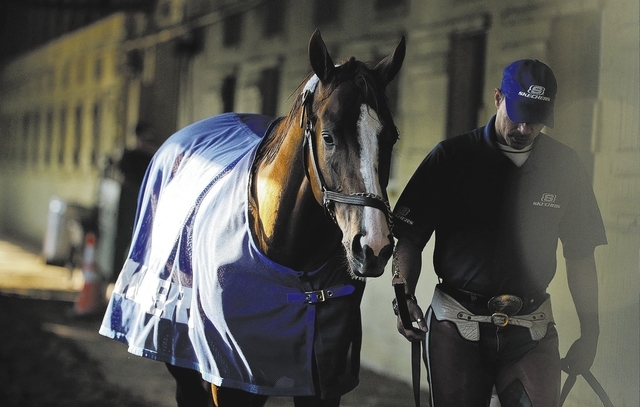 Exercise rider Willie Delgado hot walks California Chrome after a workout at Belmont Park, Tuesday, June 3, 2014, in Elmont, N.Y. The Kentucky Derby and Preakness Stakes winner will attempt to become the first Triple Crown winner since Affirmed in 1978 when he races in the146th running of the Belmont Stakes on Saturday. (AP Photo/Julie Jacobson) 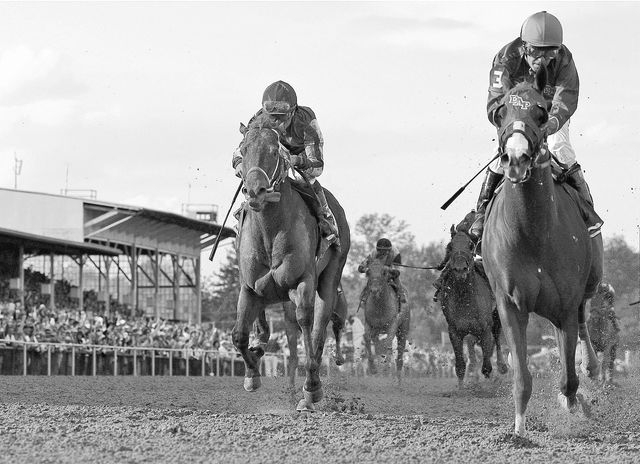 ADVANCE FOR WEEKEND EDITIONS, JUNE 1-2 - In this May 17, 2014 file photo, California Chrome, right, Victor Espinoza up, wins the 139th Preakness Stakes horse race ahead Ride on Curlin, left, who finished second, at Pimlico Race Course in Baltimore. California Chrome's bid to become racing's first Triple Crown winner in 36 years isn't scaring away the competition. Horses are lining up to challenge the Kentucky Derby and Preakness winner in the Belmont Stakes next weekend. (AP Photo/Matt Slocum, File)

I suppose if a German U-boat can rise from the depths of the ocean in Cape Cod during World War I, a host of military tactics also might be discovered up and down and all around the mile-and-a-half stretch at Belmont Park in New York on Saturday.

I suppose if the U.S. Coast Guard can find itself under attack while guarding a bunch of lobster traps in 1918, horse racing’s current superstar might also experience the dangers of being bombarded with those trying to harm him.

Or at least deny him a huge dose of history.

The last time this many assassins were lying in wait, Sylvester Stallone and Antonio Banderas were trying to see who could first kill some Interpol agents. California Chrome, co-owned by Steve Coburn of Topaz Lake, is a nasal strip away from immortality in the sport of kings, but his journey at the Belmont Stakes could prove treacherous depending on how much those running alongside seek to disrupt his path.

If we are to witness the first Triple Crown winner in 36 years, the first since Affirmed swept the Kentucky Derby, Preakness and Belmont Stakes in 1978, since the year Jim Jones convinced 909 souls to drink the Kool-Aid, a jockey who was born on a dairy farm in Mexico and is the 11th of 12 children needs to deliver the smartest ride of his life and then some.

“Victor Espinoza is the envy of all other jockeys at the moment,” said Richard Eng, the Review-Journal’s horse racing columnist and handicapper. “They’re going to be lying in wait for (California Chrome). They’re going to take turns going after him. They will do anything legal to beat him. They will try to box him in. They will try to duel with him early, middle, late. They won’t do anything illegal, but they will go after him.

“Victor can’t get sucked into all that. He has to rise above it. He has to stay out of trouble and save some horse for the last part of the race. It’s a long one.”

I’ve always thought this is where jockeys tend to overthink the room. Espinoza will be atop a horse who has won eight of 12 career races, including his past six, whose trainer believes will demand in the range of $30 million as a prospective stallion.

Others dispute that price tag — breeding is as much about a horse’s pedigree as anything, and it appears California Chrome’s father (Lucky Pulpit) was more Marilyn Manson than George Clooney.

But that shouldn’t stop Espinoza from having a heart-to-heart with the betting favorite, a sort of horse whisperer encounter that would remind California Chrome about the lifestyle that soon awaits him. The faster he gets around Belmont Park, the faster he might be sold and eventually put out to stud.

What a glorious fate.

But none of that will impress those trying to beat him. There isn’t a horse alive, and many humans, for that matter, who want to run a mile-and-a-half on dirt. My knees ache just thinking about it.

Stamina helps, of course, but strategy will play as big a part in who wins as anything else.

So while Espinoza might chart a course that would rival his horse’s victories at the Kentucky Derby and Preakness — break early, catch the leaders on the far turn and cruise past them like a 1973 Ford Mustang along the Pacific coastline with few traffic issues — there is little chance things will come as easily a third time.

I think of fresh shooters as those who can come off the bench and make jumpers down the stretch of a close basketball game. But on Saturday, those horses who skipped the Preakness will be more rested than California Chrome, a major reason the Triple Crown drought has lasted so long.

The past eight Belmont winners were eating hay at the time the Preakness was being run. Fresh horses win the Belmont. Commanding Curve. Wicked Strong. Samraat. Medal Count. Tonalist. They’re all fresh for Saturday.

“Eleven horses have been to this point and tried to win the Triple Crown since Affirmed and failed,” Eng said. “I’m not sure how California Chrome compares to all of them, to the very best like Spectacular Bid in 1979. That horse had it all. He was the nuts. He was fantastic. I think California Chrome is very good. I’m going to pick him to win Saturday.

“But I wouldn’t be surprised at all if he lost. They’re going to gang up on him.”

In 1918, the Coast Guard called for a few planes to bomb that German U-boat, but the weapons were either duds or failed to hit the target.

This is far more serious stuff than guarding some lobster traps.