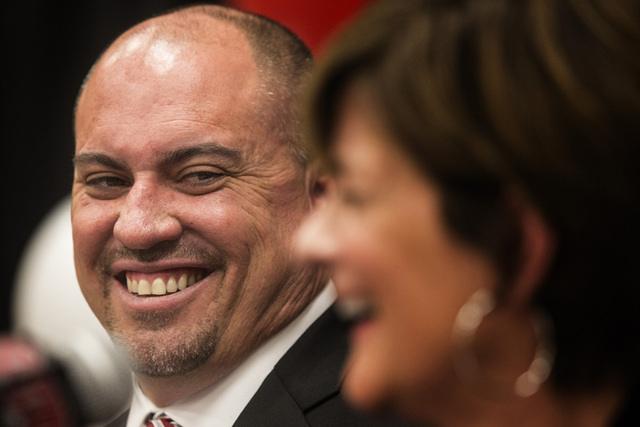 The college football coaching hire that was as much a surprise as cowboys making the Thomas & Mack Center their home this past week became official Thursday afternoon, when UNLV introduced Tony Sanchez as the next man to lead its program.

Even less of a surprise was that with the announcement Sanchez has departed perennial state champion Bishop Gorman for what has been a consistently losing Rebels program for almost three decades, several questions from the media centered on the Fertitta family and whether their close connection to Sanchez might convince them to support UNLV in a similar way as they have the Gaels.

At one point, TV reporter Amber Dixon asked this of UNLV athletic director Tina Kunzer-Murphy: “Are you confirming financial support from the Fertittas?”

“I guess the whole part of this process — I love this process — is that the end result is so great that we have (Sanchez) sitting next to me who is going to run our football program,” Kunzer-Murphy said. “But I think the most disappointing part of it is this conversation about that. (The Fertittas) are wonderful people who have been benefactors to so many organizations in Las Vegas.

I’m disappointed she didn’t take the advice of her media relations staff.

I’m disappointed in what was a completely unprofessional answer to a legitimate question.

I’m disappointed she was inconsiderate enough to laugh at the question before answering.

I’m disappointed that whoever truly ran the search, and you will receive different answers depending on whom you ask, wasted the time of some respected coaches, those with NFL and college ties, when no one other than Sanchez was considered for the job.

“I wish them nothing but the best now and in the future,” said former NFL Coach of the Year Jim Fassel, who lives in the valley. “But I spoke to them for about 90 minutes last Wednesday and withdrew my name the following morning. There was just too much smoke to believe the job was ever really open.”

It’s a popular theory because it’s the truth.

And that’s fine. Has been from the beginning. Be innovative. Embrace a risk. Do something different. Champion a unique vision. Take that bold and unconventional move that you spoke about when introducing Sanchez.

Nothing else has worked.

But don’t try to belittle someone asking about the one connection that makes this hire sensible. Don’t suggest that it’s wrong to inquire about the one relationship that is most responsible for building Bishop Gorman into the nation’s top prep program and how that might now influence whether Sanchez can be successful at the college level.

Fact: In his introductory remarks, Sanchez thanked the Fertitta family before his own.

What does that tell you?

I have no idea how much, if anything, the Fertittas would be willing to donate for facilities or salaries or academic support or training table or the multitude of areas in which UNLV needs to upgrade its program. That’s up to them. Their decision. Their money. Maybe they’re all in. Maybe they’re not in at all yet.

But asking about it Thursday and reporting on it throughout the process given the ties between coach and family was responsible and appropriate in every sense.

I wasn’t, by the way, disappointed at all in Sanchez.

He was humble, passionate, lively, candid. No one ever said he can’t work a room, and I’m guessing that sort of energy will translate well when sitting in the homes of recruits, both locally and outside Nevada.

He gets people fired up.

He’s a football coach from every angle.

I also believe he will hire good, experienced assistant coaches and not be threatened to employ those with more experience. Everyone talks about how detailed Sanchez is, how his practices are choreographed down to the second. That can only be a good thing.

“It’s not about what you do, it’s about the way you go about doing it,” Sanchez said. “I think you have to be raw, you have to be real, you have to let (players) know who you are. I think a lot of the kids will respect where I come from. I think a lot of them have called their high school coaches and talked to them and have been assured, ‘This guy knows what he’s doing.’ When we bring the staff in and they get to sit and meet with them, everyone will be very calm.

“At the end of the day, I had a clear vision of what I was walking into. From this point forward, as long as the regents approve me, I own everything. I’m not going to complain. I’m not going to whine. You’re not going to hear me talk about the past. There’s no point in it. We’re not going to be excuse-makers. It’s about owning every facet of it. I know UNLV made a bold statement hiring me. I’ve never been more driven.”

Others could take a lesson.