ATLANTA — They knew everything. Every play. Every cut. Every screen. Every hand signal. Every counter. Every sequence. They screamed, directed, encouraged. They weren’t surprised once over 40 minutes. It was like walking into a final exam with all the answers. Like knowing the winning lottery numbers before buying the ticket.

Few college basketball teams have been as prepared to play a national final as Ohio State was Monday in the Georgia Dome, which makes this all the more amazing: The Buckeyes never had a chance.

History is a pretty tough opponent to defeat. History and talent simply create too towering a mountain to conquer.

A dazzling light shines on Florida today and the Gators deserve to bask in it, having become the first team since Duke in 1991 and 1992 to win consecutive NCAA basketball championships.

The final seconds ticked away and Al Horford flung the ball up high and confetti rained down and one of the more special Final Four stories to be performed over two years was complete with an 84-75 win.

Destiny prevailed. It’s how it should be. Florida is among the best ever to stand alone at season’s end.

"We took away exactly what we wanted to take away from them," Ohio State coach Thad Matta said. "But when you’re playing a great team and they keep making incredible plays, there is not a lot you can do."

Greatness is one of those overused words in sports assigned far too effortlessly. Like momentum. Like focus. But it’s the only way to fairly portray the Gators. They won’t be remembered for having the most talent of some past champions, but it would be difficult to flip through the list of those who have won the title and discover a group that more defined a team. Impossible, really.

The Gators won last season eased by the comfort of no expectations. They won this season burdened by the weight of everyone’s expectations. They are unique in that those three juniors who could have easily walked off campus and into the reality of NBA riches chose to return. They are exceptional in that a coach (Billy Donovan) was able to mesh diverse personalities and egos into a unit without a hint of selfishness.

You just don’t see this much talent play this well together on this stage. Some issue always emerges. It never did this time.

"I sit here very, very humbled because I was fortunate enough over the last two years to coach a group of guys that has to go down as one of the greatest teams of all time," said Donovan. "I’m not saying they were flawless. But when you talk about what the word ‘team’ encompasses, they have to be considered one of the best to ever play."

What now? In all likelihood, it ends here.

The juniors (Horford, Joakim Noah and Corey Brewer) will again be faced with that question — stay in school and go for another title or purchase fancy new threads for NBA Draft night — and the triumph of winning consecutive championships is probably enough to ensure they will choose the latter. It would’ve been hard to blame them for leaving last season and impracticable to do so now.

For weeks, Donovan has successfully avoided talking specifically about his job status like a dog might an approaching car. It took one question following Monday’s victory to remind everyone Kentucky is about to approach him with a coaching offer that would make him rich enough to pretty much purchase Lexington and run it as his own little dictatorship. He did what was expected. He avoided the approaching car.

He and those in Gainesville deserve a day or two to enjoy all this: Only one of seven teams in history to win consecutive championships in basketball. The only school to win a national title in football and basketball in the same academic year (yes, college athletics have become Florida’s world now and everyone else is just paying rent). A program of Donovan’s that is 22-1 in the postseason the last three years and has 68 wins over the last two.

Ohio State knew everything. Every play. Every cut. Every screen. Florida just kept answering. Hit every big shot. Made every big stop. Grabbed every important rebound.

"The most unbelievable feeling in my life," the eccentric Noah said. "People can say whatever they want about us, but at the end of the day, the Gator boys have back-to-back championships."

When you think of them, only one word applies: Greatness.

It can’t be used enough in this case.

Golden Knights owner Bill Foley, a member of the Army class of 1967, sat just off the ice at T-Mobile Arena on Friday, watching Army play Providence in the Fortress Invitational.

The Rebels bounced a defending Mountain West co-champion and unanimous preseason favorite to repeat right out of the Thomas Mack Center on Wednesday, beating Utah State 70-53. 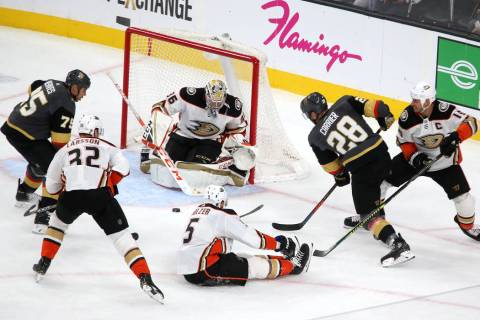 The line of William Carrier, Tomas Nosek and Ryan Reaves was again stellar Tuesday, when the Knights dismissed lowly Anaheim 5-2 before at T-Mobile Arena.