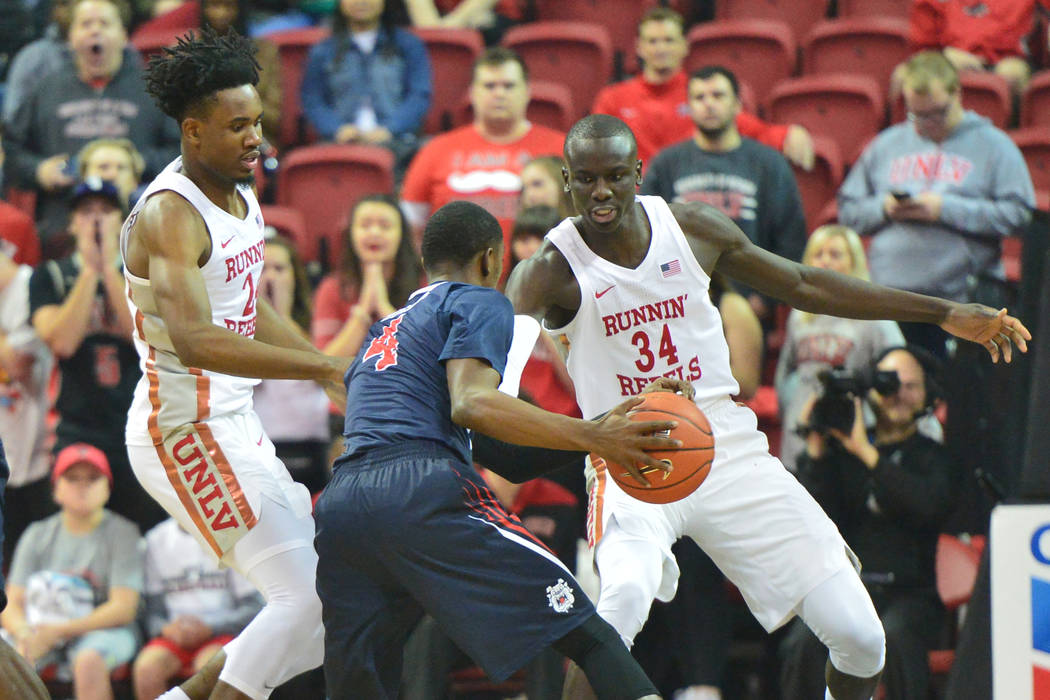 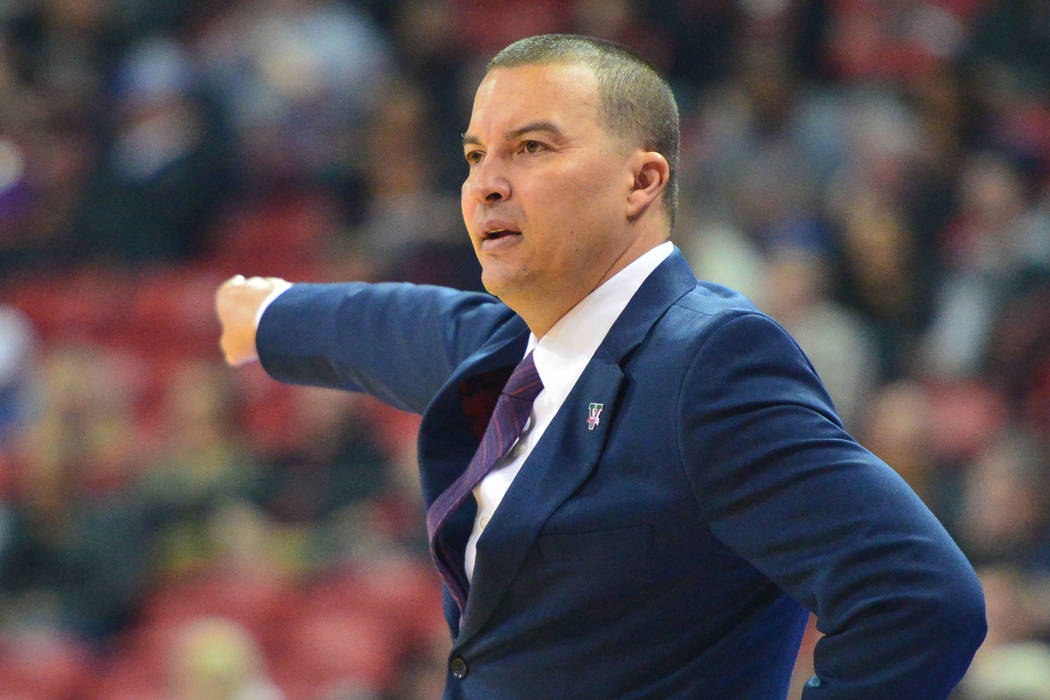 Fresno State Bulldogs head coach Justin Hutson talks to his players during the first half of a game between UNLV and Fresno State at the Thomas & Mack Center in Las Vegas, on Saturday, Feb. 9, 2019. Fresno State won 83-65. Brett Le Blanc Las Vegas Review-Journal 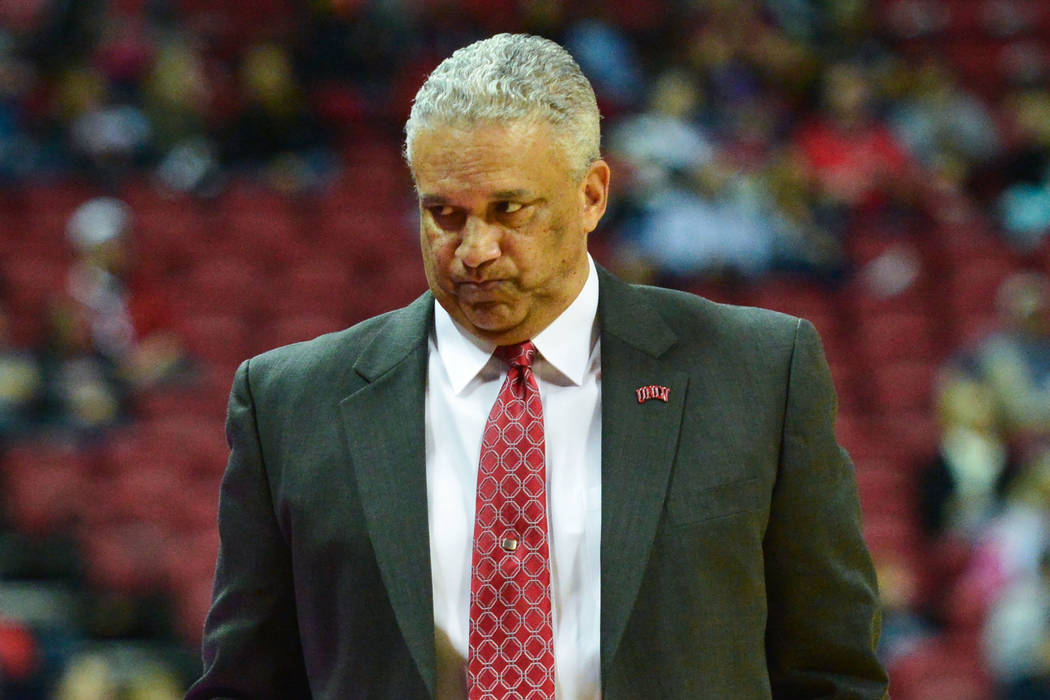 UNLV Rebels head coach Marvin Menzies reacts to a play during the second half of a game between UNLV and Fresno State at the Thomas & Mack Center in Las Vegas, on Saturday, Feb. 9, 2019. Fresno State won 83-65. Brett Le Blanc Las Vegas Review-Journal 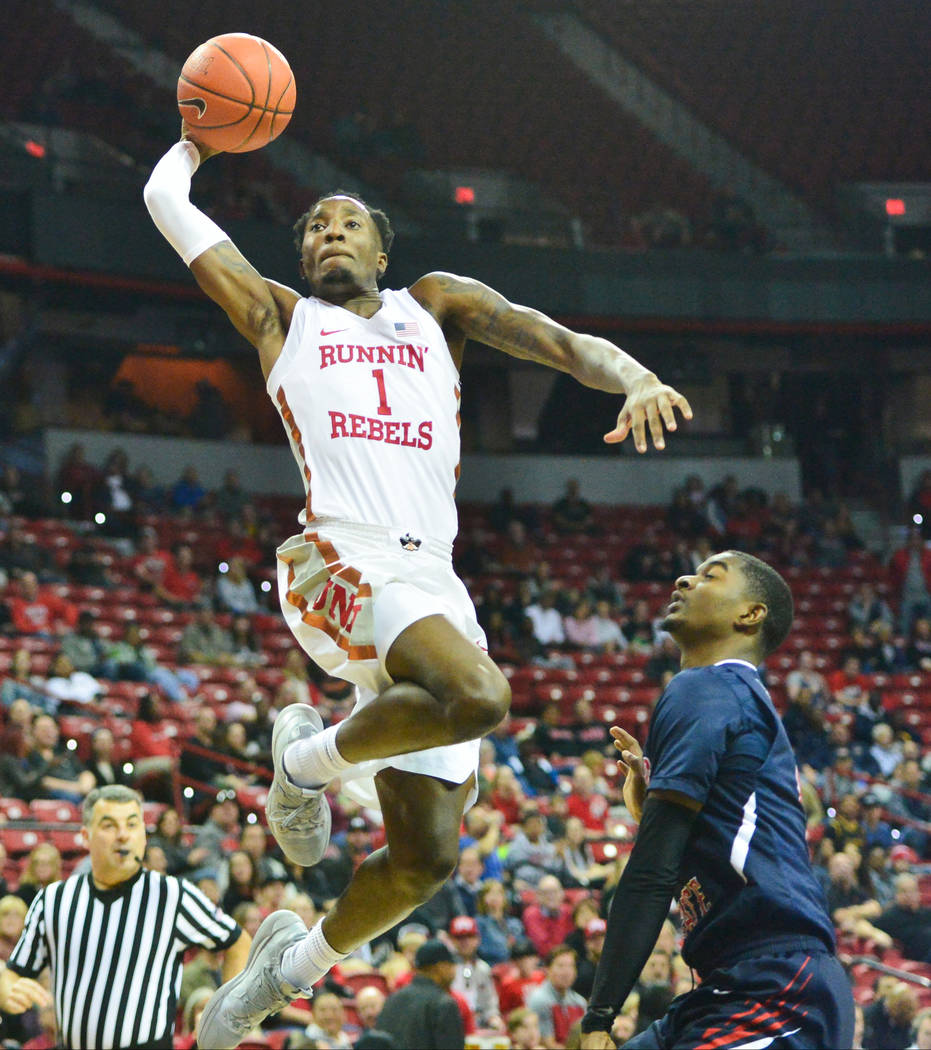 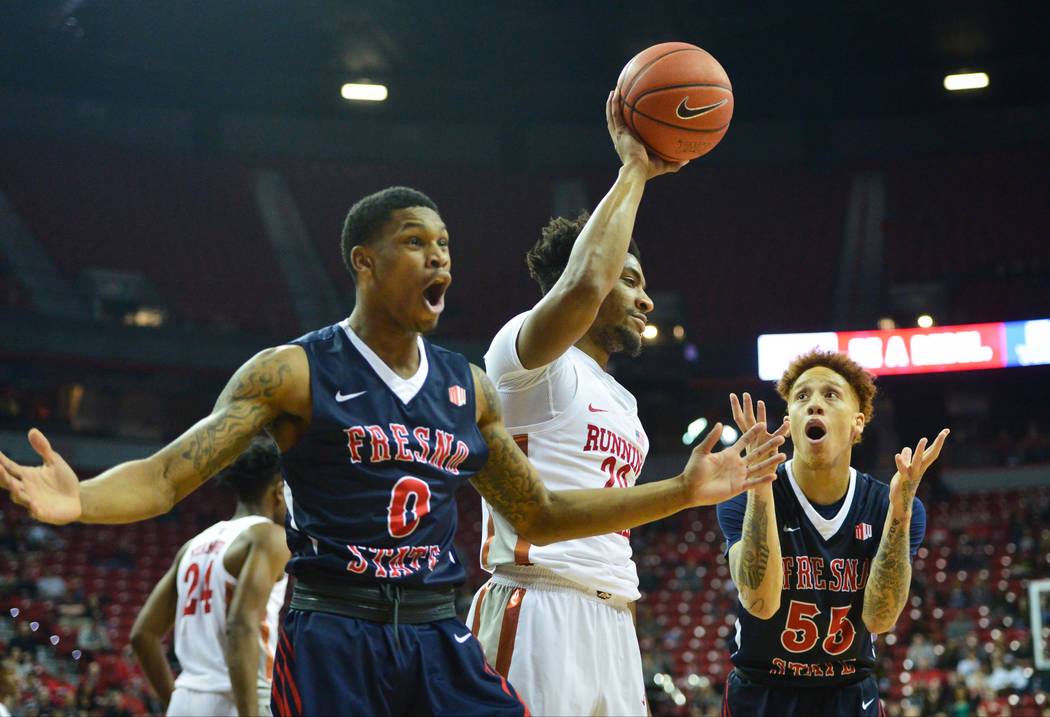 Fresno State Bulldogs guard New Williams (0) and guard Noah Blackwell (55) react to a call while UNLV Rebels forward Nick Blair (20) walks past during the first half of a game between UNLV and Fresno State at the Thomas & Mack Center in Las Vegas, on Saturday, Feb. 9, 2019. Brett Le Blanc Las Vegas Review-Journal 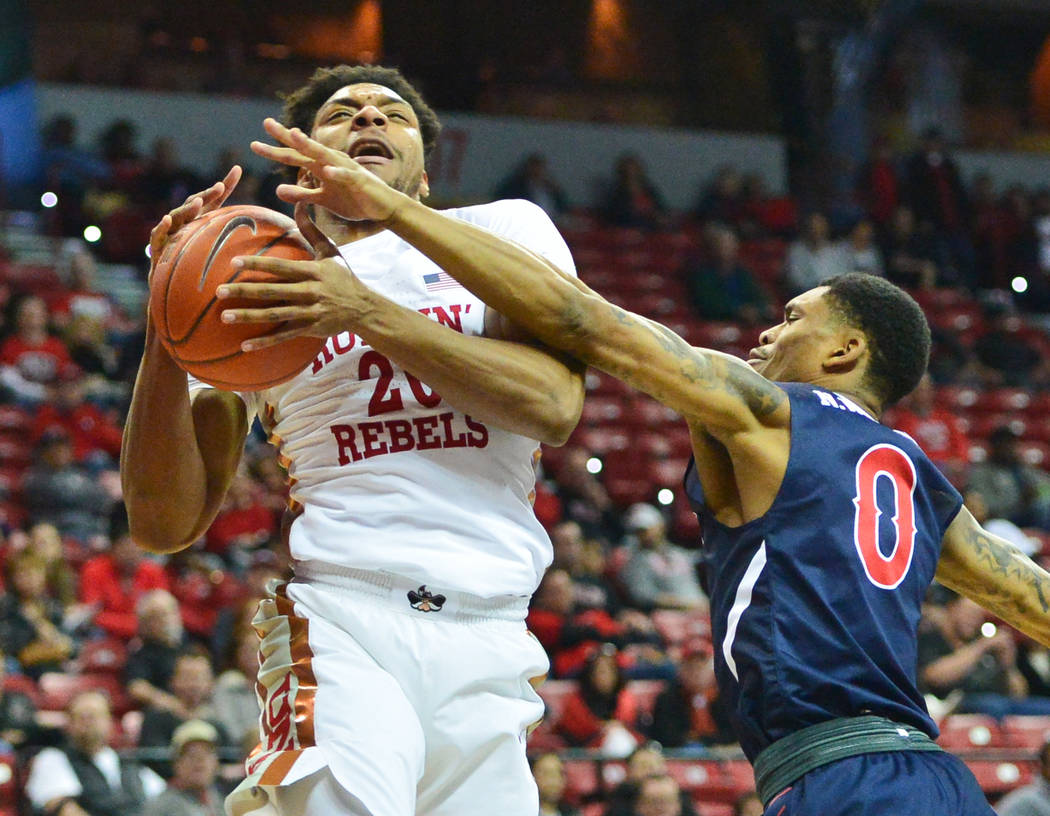 UNLV Rebels forward Nick Blair (20) goes up for a shot against Fresno State Bulldogs guard New Williams (0) only to get called for traveling during the first half of a game between UNLV and Fresno State at the Thomas & Mack Center in Las Vegas, on Saturday, Feb. 9, 2019. Brett Le Blanc Las Vegas Review-Journal 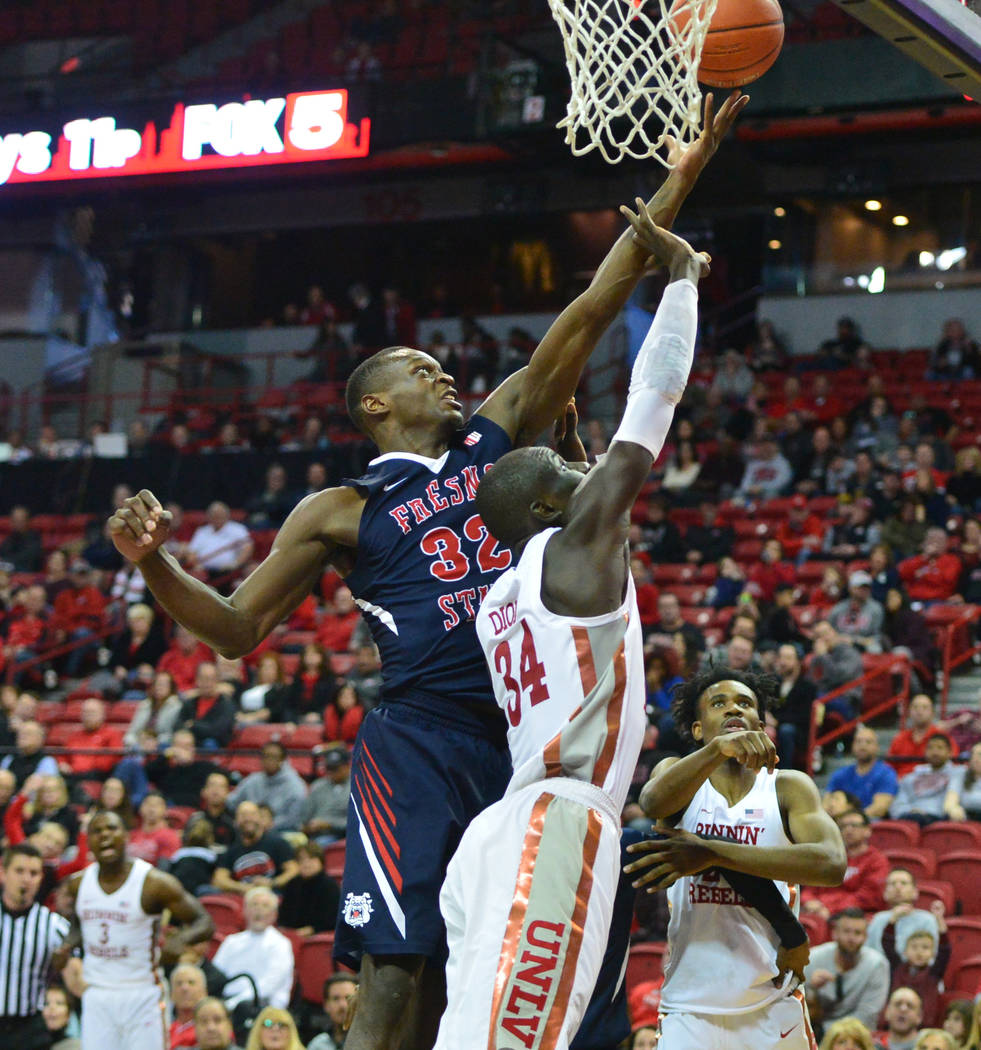 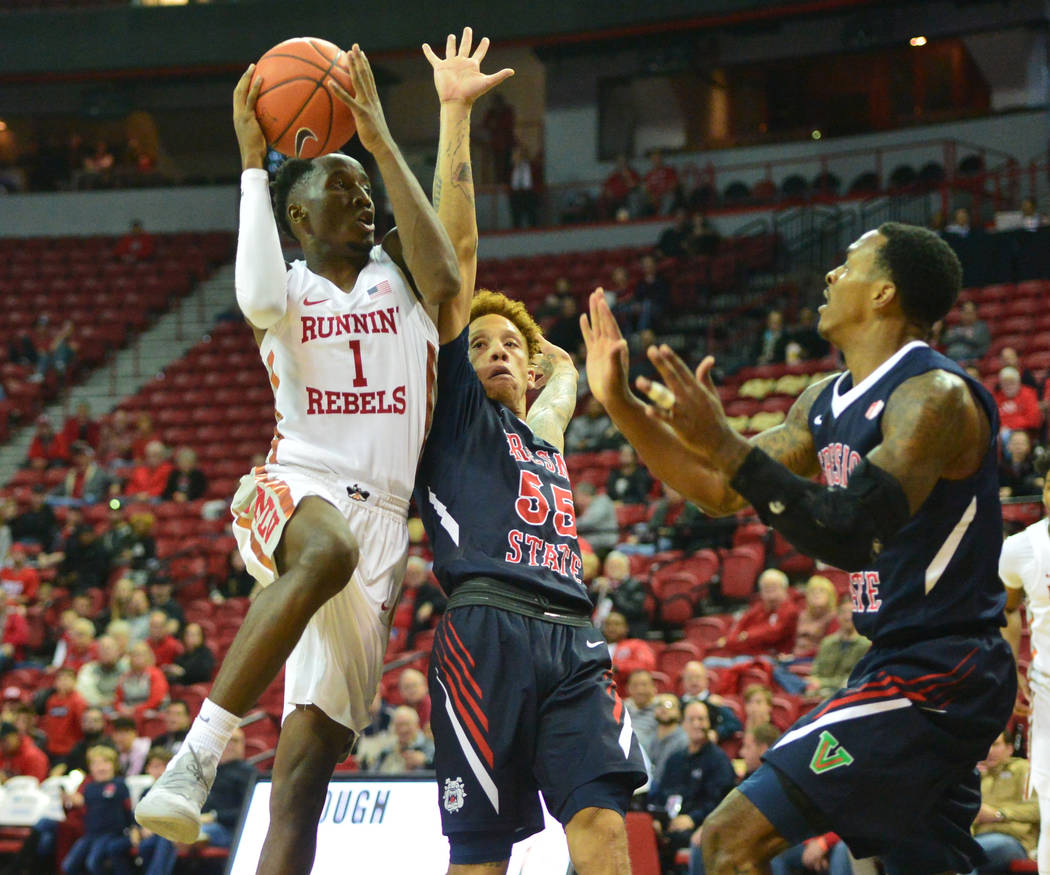 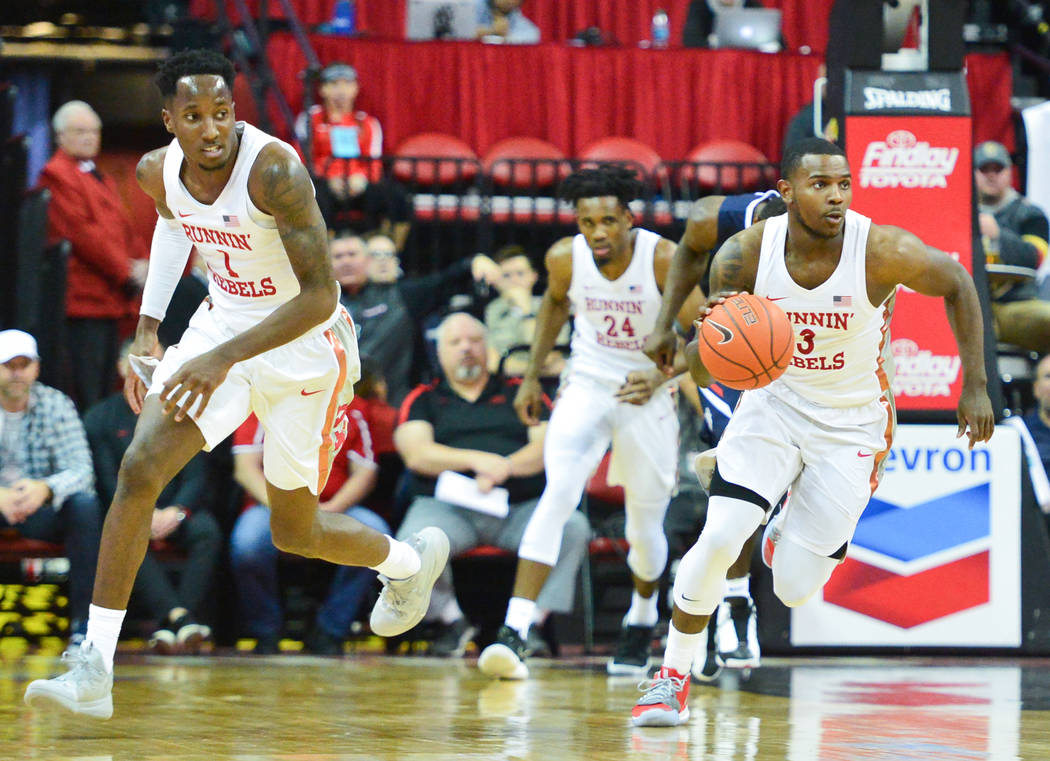 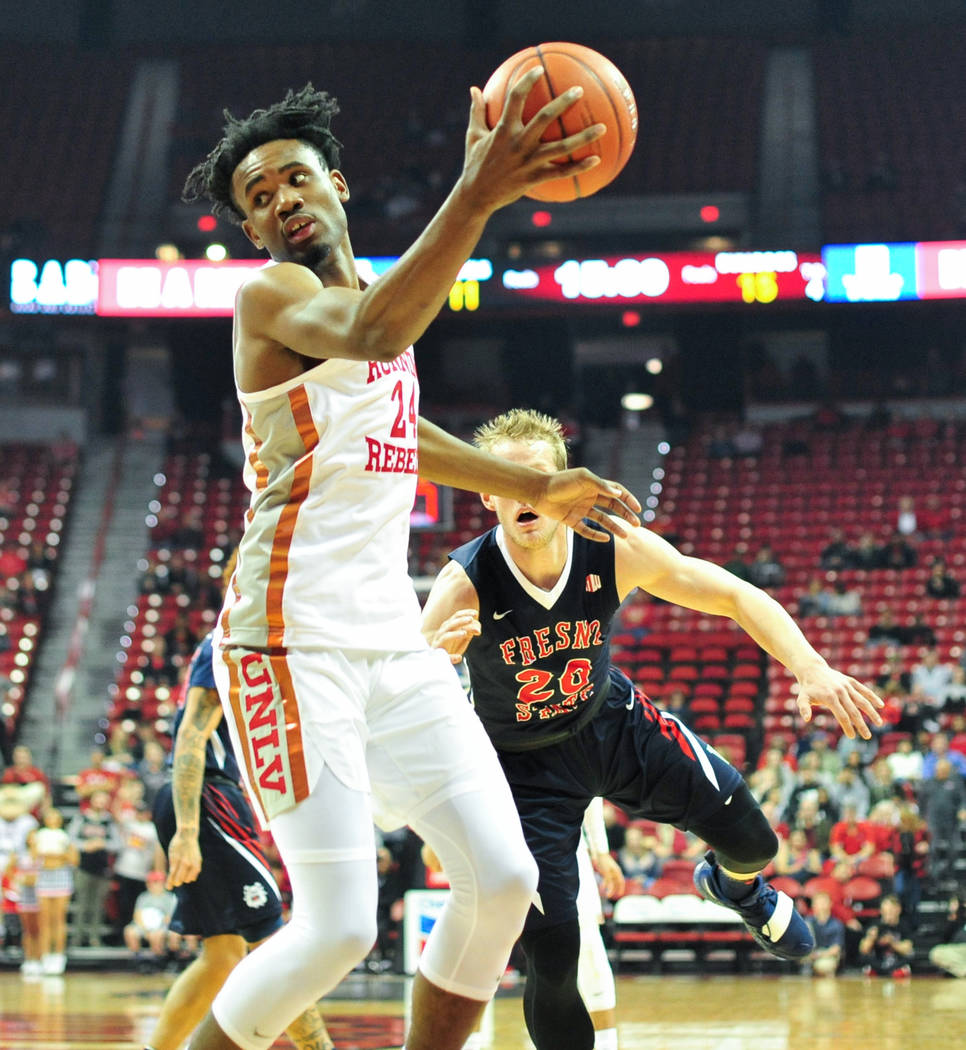 UNLV Rebels forward Joel Ntambwe (24) catches a pass with one hand while being guarded by Fresno State Bulldogs forward Sam Bittner (20) during the first half of a game between UNLV and Fresno State at the Thomas & Mack Center in Las Vegas, on Saturday, Feb. 9, 2019. Fresno State won 83-65. Brett Le Blanc Las Vegas Review-Journal 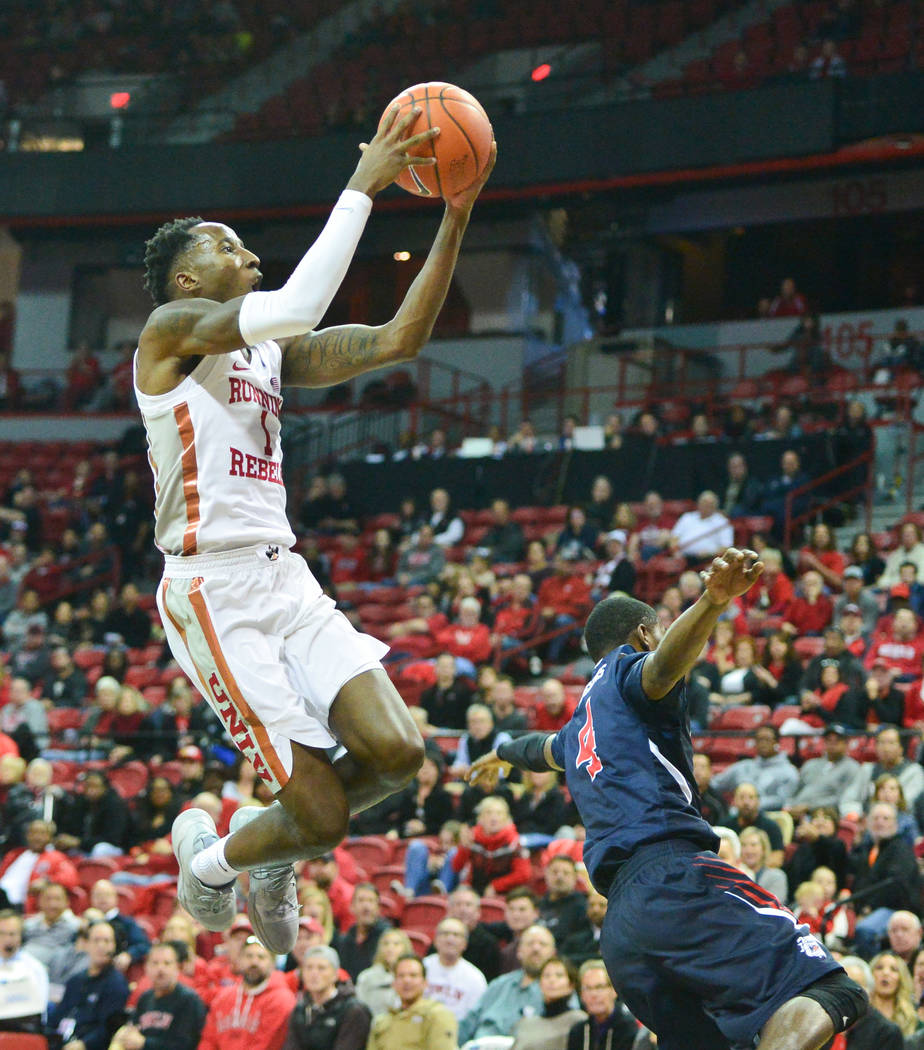 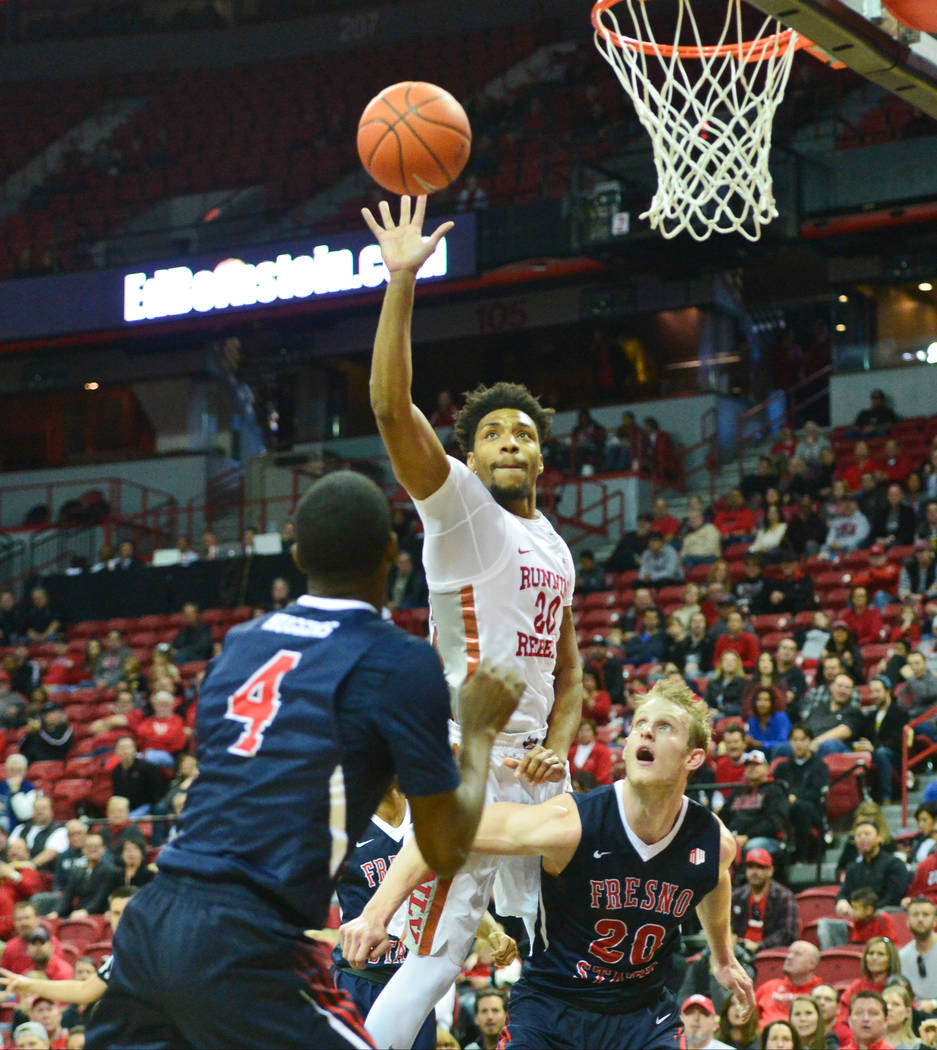 It’s not everything in college basketball in 2019 — a winner being decided by which team makes more jumpers from distance — but it’s a whole heck of a lot.

It’s the main reason Fresno State waltzed to an 83-65 victory against UNLV on Saturday before an announced gathering of 8,324 at the Thomas &Mack Center.

There wasn’t half that in the place. Apathy is alive and well at these things.

The straightforwardness of it all on the court can be striking at times.

On Saturday, Fresno State strolled into a subdued Thomas &Mack.

Other factors led to the Rebels never being closer than five points in the final 35 minutes — begin with the fact that the Bulldogs are just better — but a major factor was how well Fresno State shot in transition in the first half and how little UNLV did to stop it.

It means the anticipated stretch of Mountain West games for UNLV after a 5-1 start — against a top-10 team (UNR), a solid one (Utah State), a sometimes solid one (Fresno State) and two terribly inconsistent and dead-flat-average-at-best ones (San Diego State and Boise State) — concluded with a 1-4 record.

Not a final possession nail-biter among them.

Translation: What should be the ultimate goal for UNLV hasn’t and shouldn’t change, which is to say do everything it can to win enough games in a bad league that would guarantee a top-five finish and not be required to play on the first day of the conference tournament.

The latest defeat was about one team (Fresno State) having a plan and executing it, and another (UNLV) unable to cause much stress during the process. The Rebels and Bulldogs have been prone to slow starts, but that was hardly the case for the visitors Saturday.

UNLV entered as the Mountain West’s best 3-point shooting team in conference games (41.2 percent) and Fresno State the best at defending the 3 (29.6)

Guess which was better?

“We played well,” first-year Bulldogs coach Justin Hutson said. “We wanted to take the 3-point line away from them but still gave up too much at the rim. We’re a good defensive team. To be a great one, you take away both.”

UNLV isn’t a great defensive team. It’s not even a good one.

It certainly had no answer for Fresno State senior Braxton Huggins, who scored 31 points on 10-for-16 shooting while making 6 of 9 3s. His is an interesting backstory, given Huggins played two seasons at New Mexico State for Menzies before transferring after his junior year.

Did Menzies try to lure him to UNLV?

Huggins: “I don’t want to speak on that topic.”

“Braxton is (from Bakersfield, California), and we understood that he wanted to be closer to home,” Menzies said. “He’s back now, right down the road from where he grew up. He’s a great kid. Works his tail off. He’s a gym rat. He loves the game. I’m happy for him and his family.”

Whether UNLV had a chance to land Huggins as a transfer, or whether it pushed for him at all, doesn’t matter now. What does is the glaring weakness it has when trying to defend such a skilled player.

“I coached his older brother at Bakersfield High, so I was very excited to see Braxton on our team when I took the job,” Hutson said. “He has (seven) brothers, and the combination of the Huggins family and Bakersfield are known for two things — a jump shot and crossover. They all have them, and Braxton is the best of all of them.”

Per some advantageous scheduling, UNLV won’t face Fresno State (or Utah State) a second time in conference play and now sets to host Air Force before road games against San Jose State and Wyoming, teams with a combined league record of 7-24.

Which means this 1-4 streak probably will be followed by some wins.

Which shouldn’t alter the ultimate goal of finishing in the top five, avoiding an opening-day tournament game and taking one’s best shot on the home floor.

This is where UNLV is right now.

This is the present ceiling at which to aim.

If someone says different, ask to see their agenda.