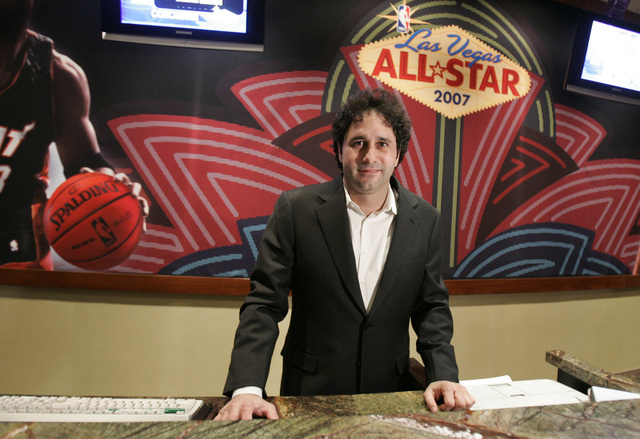 The Palms resort-casino owner and owner of the NBA's Sacramento Kings, George Maloof, stands at the front desk of his casino Thursday, Feb. 8, 2007, in Las Vegas. NBA All-Star players will be staying at the Palms over 2007 NBA All-Star weekend. (John Locher/Las Vegas Review-Journal) 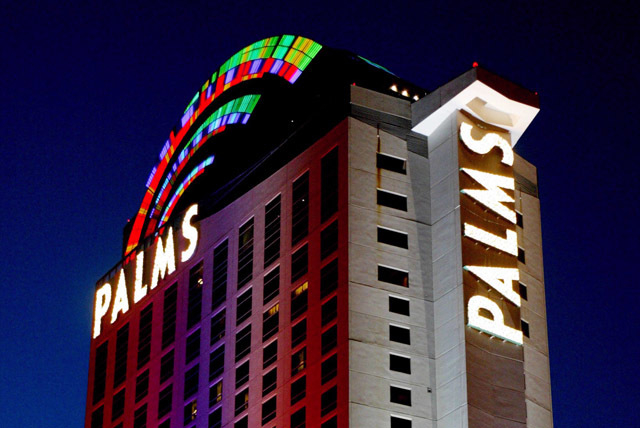 The Nevada Supreme Court reversed a decision to award $6.6 million to a man who suffered a knee injury during a Monday Night Football event at the Palms. (Review-Journal File) 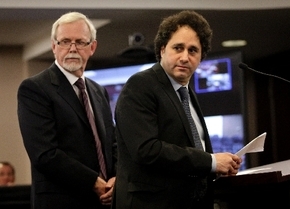 Palms minority owner George Maloof, right, appears before the Nevada Gaming Commission on Thursday at the Sawyer Building. Frank Schreck, an attorney for the Palms, is at left.

Look at it this way: There won’t be any issues with them botching another arena deal.

It has been said that any good comeback needs some true believers. This might be a problem for the Maloof family.

I’m not sure anyone outside close friends and relatives have much trust in the name.

I’m not even sure they do.

I also don’t believe it matters one iota to the NHL.

Its board of governors has reportedly chosen Fidelity National chairman and billionaire William Foley and the Maloof family as prospective owners of the expansion franchise Las Vegas is expected to receive when the league adds two Western teams.

Reports have stated the team would begin play at the new MGM-AEG arena in the 2017-18 season.

In other words, it’s a done deal.

Professional sports leagues, particularly the NHL, prefer local ownership. The Maloofs would give the Las Vegas team that, and their remaining 2 percent stake in the Palms might even ensure that’s where Sidney Crosby and his mates stay when in town.

The MGM Grand probably has other ideas.

The Las Vegas Scorpions — I’m throwing it out as a potential nickname for our soon-to-be NHL team, and it has a nice ring to it — would need more than the support of casinos and tourists to sustain and survive past the honeymoon period of backing a team that is sure to stink at the outset.

Losing usually wears thin, and the novelty of a city having its first major league sports franchise always wears off, meaning it’s even more important the team would need a loyal fan base of locals to support a needed average of about 12,000 per night.

Whether or not the Maloofs have enough juice to help create such interest is a mystery larger than Foley’s bank account.

He’s obviously the moneyman in this equation, given no one has any idea how much of the Maloof fortune remains. They once boasted of having a net worth of $1 billion, which probably wasn’t true but made for some conceited TV commercials back when brothers Joe and Gavin owned the Sacramento Kings of the NBA.

You know, back before the economy went into the toilet and the Maloofs backed out of an arena deal for the Kings and eventually sold their beer distribution company to help save the Palms, which they lost anyway.

Back before their empire collapsed and the Maloofs became the most hated souls within California’s capital city.

“Ever since they sold the Kings (for $535 million in 2013), they have been looking to be involved in another sports franchise,” said Ailene Voisin, sports columnist for the Sacramento Bee who covered the Maloofs’ tenure with the Kings. “I’m not sure how much money is left after paying off all their debt, but I don’t think they would do this unless they are in a managing role. That’s their style. They want to run things. They want to be out front and in the spotlight. They want to be relevant. It’s not in their DNA to be behind the scenes. They want to be the celebrities, so I can definitely see them doing something like this with the NHL and Las Vegas.

“They’ve had their eye on hockey for a long time. I figured they’d jump back into sports at some point, and it’s even better for them that someone with big money is behind them.”

The expansion fee for a Las Vegas team is reportedly in the $400 million range, a check Foley could probably write himself, and yet I’m sure he would prefer a second signature and some help with all those zeros.

Funny. The Maloofs were actually terrific owners in their early days with the Kings. They bought the franchise in 1999, had one of the league’s highest payrolls, allowed the right people to make basketball decisions, took care of their employees and won with a team on which they inherited players such as Chris Webber and Vlade Divac.

Joe and Gavin Maloof were the darlings of Sacramento, and they loved basking in every second of admiration.

But then everything fell apart. The recession hit. They began to strong-arm people. The arena deal was a disaster. Things went bad fast. They became villains overnight. One local official was quoted as saying that “Dealing with the Maloofs is like dealing with the North Koreans — except they are less competent.”

They became recluses, hiding in the shadows and avoiding the spotlight.

Call this, then, the potential for a new beginning.

The majority of NBA owners despise the Maloofs, so there is zero chance that league would ever open its arms to them again. The NHL obviously doesn’t have the same history.

It’s also good for the Maloofs that Tim Leiweke resigned last year as president and CEO of AEG, given his distaste for the family after the company had pledged $59 million to the Sacramento arena deal the Maloofs rebuffed.

Maybe the Maloofs ultimately play a role with the Las Vegas team similar to that of Magic Johnson with the Dodgers, meaning more face time for the cameras than anything involving real power.

Maybe their role is far more important and their stake much larger.

Maybe they just drive around on the Zamboni and wave to fans between periods.

But a team is coming, and by all accounts, the Maloofs are going to own at least part of it. They’re involved up to their ice-tipped lapels.

“They just have this affinity to always be involved with a sports franchise,” Voisin said. “The NBA won’t touch them. There doesn’t appear to be opportunities for them in baseball. Hockey makes sense. Leiweke is out of the way with AEG. I’m not surprised at all this has happened.”

Some of the greatest moments in sports history are defined by comebacks.

If the Maloofs are successful in pulling this one off, it would be a doozy.