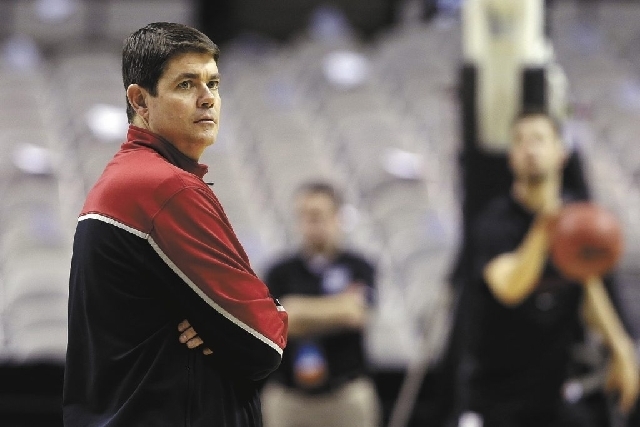 UNLV coach Dave Rice watches his team practice Wednesday at HP Pavilion, where the fifth-seeded Rebels face 12th-seeded California today in the NCAA Tournament. UNLV (25-9), in the tournament for the sixth time in seven years, has lost its opener three years in a row.

The best part of the rule isn’t the earlier start time.

It’s all the days off.

The college basketball season is a grind, for so long beginning with a practice on Oct. 15 and, for those teams competent enough to qualify for a postseason tournament, not ending until the calendar had passed into March and the madness had commenced.

For the four best teams, not until April arrived.

Teams were in a rush to get started. They scheduled season-opening games on the first allowable day, beginning the race in a full sprint and never allowing for a light jog to stretch the muscles.

That should change now with new NCAA legislation.

Teams will begin practicing across the country Friday, two weeks earlier than the traditional mid-October date. It’s a good rule (how many times do you hear that about the NCAA?) that will allow programs to ease into workouts 42 days before their first game.

But while coaches still will receive 30 days of practice between now and a ball being tossed up for real, they also will be required to schedule 12 off-days during that span.

Things won’t be as hectic now.

Coaches and players will be allowed time to breathe.

It’s not about more practice time than before but rather spreading out the on-court time you have.

It’s especially important for a program such as UNLV, which will rely this season on several new faces playing prominent roles, on expecting talented recruits to immediately produce.

The Rebels will have their first official practice Oct. 7, with a regular-season opener against Portland State on Nov. 8. Until next week, however, the only things missing from workouts will be Gene Hackman setting up folding chairs and talking about being in the army every day from 3 to 5 p.m. and Jimmy Chitwood watching from a dark corner.

“We’ll spend a lot of time on fundamentals to start, taking our time to really stress those as a group,” Rebels coach Dave Rice said. “The tricky part is trying to figure out when to take those 12 days off. I’m sure we will take more days off the first 10 than we do the final 32 before our first game arrives. In talking to colleagues across the country, most everyone is excited about the earlier start date, and yet no one is exactly sure how things will work because we haven’t done it.

“I like the (new rule). The more access we have to our players in the gym is a positive thing. I think one of the reasons international basketball has caught up more is the amount of time their players spend in the gym developing their skills.

“We have a lot of work to do as a team, but I like our guys a lot. They love being in the gym. They love working. None of us really know how to define it, but we all understand how important chemistry is to a team. Certainly, the sooner we can be all together as a group and get to know each other and practice and watch film, the better. Up until now, we’ve been in the gym with guys for just two hours a week with a ball. While we’re grateful as coaches for it, that’s not enough time. I like the fact we can gather with everyone starting Friday.”

Not all coaches love the idea of beginning earlier.

Here’s why: The college game is awash with players owning dreadful fundamentals. Thinking goes, most teams will use the earlier start time to begin drilling set plays and defensive schemes while refusing to commit valuable minutes to developing basic skills.

That coaches will feel the pressure not to be left behind by the competition, that the season already is long enough, with basketball being the one sport spread over two semesters, that players could burn out by March.

“That might be a danger, but I believe if you have a team that’s burned out for the NCAA Tournament, you have the wrong team,” Rice said. “Making (the tournament) is a reward for having a successful offseason and regular season.”

He believes UNLV will be better defensively this season, that improved skill and the benefit of having a shot-blocker such as junior Khem Birch for an entire season will translate into more stops for a team that hasn’t always protected its basket as one with championship aspirations should.

Nothing is certain, not if the Rebels will prove better at that end or if all the new faces will jell into a group worthy of Top 25 rankings and a contender’s status within the Mountain West.

But this is: Things begin earlier this season.

If handled correctly, it could prove a valuable asset months from now.