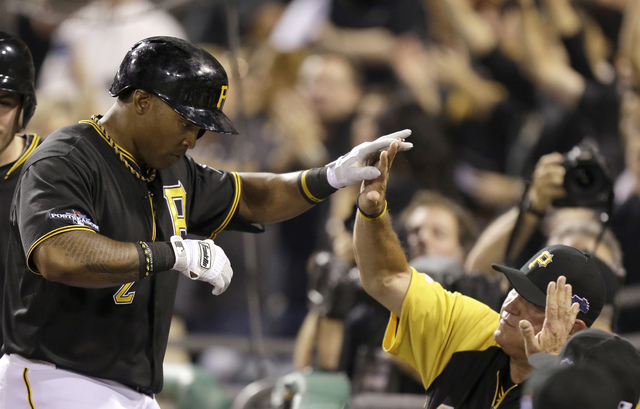 There were flags and banners and mirrors with logos and tickets from past Super Bowls. There was a yellow towel — the Terrible kind — encased in glass. There was a carved wooden sign and a picture of a helmet. There was even a menu to honor the establishment’s favorite NFL team. You could order the shoestring fries as part of the Heinz Field Specials.

All Pittsburgh Steelers, all the time.

Not so for a certain baseball team.

I took a shot. Flipped a coin. Rolled the dice. The Pirates on Tuesday evening returned to the Major League Baseball playoffs for the first time since a lummox named Sid Bream lumbered around third base and slid under the tag of Mike LaValliere, since the throw by a nonjuiced Barry Bonds went to the right of home plate and a postseason drought that could rival anything the Dust Bowl brought the Great Plains swallowed Pittsburgh.

I have good friends who are lifelong Pirates fans — more on a particular one later — but wanted to seek out others on such a special night for their team. That’s what brought me to Bob Taylor’s Ranch House out in the northwest, to one of the best places in Las Vegas to watch the Steelers — yes, even the dreadful Steelers of 2013 — each Sunday.

Not so much for anyone watching the Pirates beat the Reds 6-2 in a National League wild-card game.

Which means no one except a charming female bartender working her final shift before vacation, myself and Tim McGraw singing about there being nothing in the whole wide world like a Southern girl.

Put it this way: There was a lot more talk about the prime rib than anything Francisco Liriano was doing at PNC Park.

“The only time we hear about baseball here,” the charming bartender said, “was if the 51s play.”

There once was a time when a joke immediately would follow — something along the lines of the local Triple-A team having a larger payroll than the Pirates — but while Pittsburgh remains a small-market operation when compared to the financial giants in Boston and New York and Los Angeles, the idea that this playoff run is a direct result of a “Moneyball” approach is a stretch at best.

This isn’t: That the Pirates have advanced to play the Cardinals in a division series is good for baseball, no matter which uniform you cheer for most. It gives others like them hope. Hope breeds interest.

You always can find cheap players who produce, those you might consider undervalued and an ideal fit within your strategy to win. But successful small-market teams don’t inevitably translate to the methods made famous by a certain book and movie regarding the Oakland A’s. Everyone is in the sabermetrics business at some level.

Sometimes, being as good as Pittsburgh is nothing more than smart people making sound decisions.

It’s how the Pirates of today were born.

They not only built through the draft but paid their selections the sort or bonuses that suggested management was serious about returning to a time when above-.500 records were expected rather than celebrated. They nurtured and developed Most Valuable Player candidates such as Andew McCutchen. They traded for veterans who filled needs and were intelligent in how they spent their limited free-agent dollars.

They thought pitching and defense first.

They did it all with a payroll short of $80 million, allowing their most passionate supporters to once again begin creating black and gold memories while putting further to rest the vision of a lummox rounding third and sliding ahead of a tag.

“I went nuts when Sid Bream scored,” said Curtis Livreri, one of those lifelong fans (lunatics) who admitted to holding a bat and wearing a Pirates helmet as a high school sophomore while watching Game 7 of the championship series against the Braves in 1992. “I went ballistic. I broke my helmet, and my mom got so scared, she hid in the closet. I missed school for three days.

“The Pirates hadn’t had a winning record since until now. Now, all of sudden, there are expectations for next season and the one after that and so on. But there are worse alternatives.”

One of my favorite lines from Brad Pitt when playing Oakland general manager Billy Beane in “Moneyball”:

“I know these guys. I know the way they think, and they will erase us. And everything we’ve done here, none of it will matter. Any other team wins the World Series, good for them. They’re drinking champagne; they get a ring. But if we win, on our budget, with this team … we’ll have changed the game. And that’s what I want. I want it to mean something.”

The Pirates returned to the playoffs Tuesday night, won and moved on.

It’s not “Moneyball” in the sense many believe. It’s mostly good business.

And very good for baseball.

It means something. No one is going to erase this season for Pittsburgh.

But it appears a lot of people will continue to order the prime rib at the Ranch House.