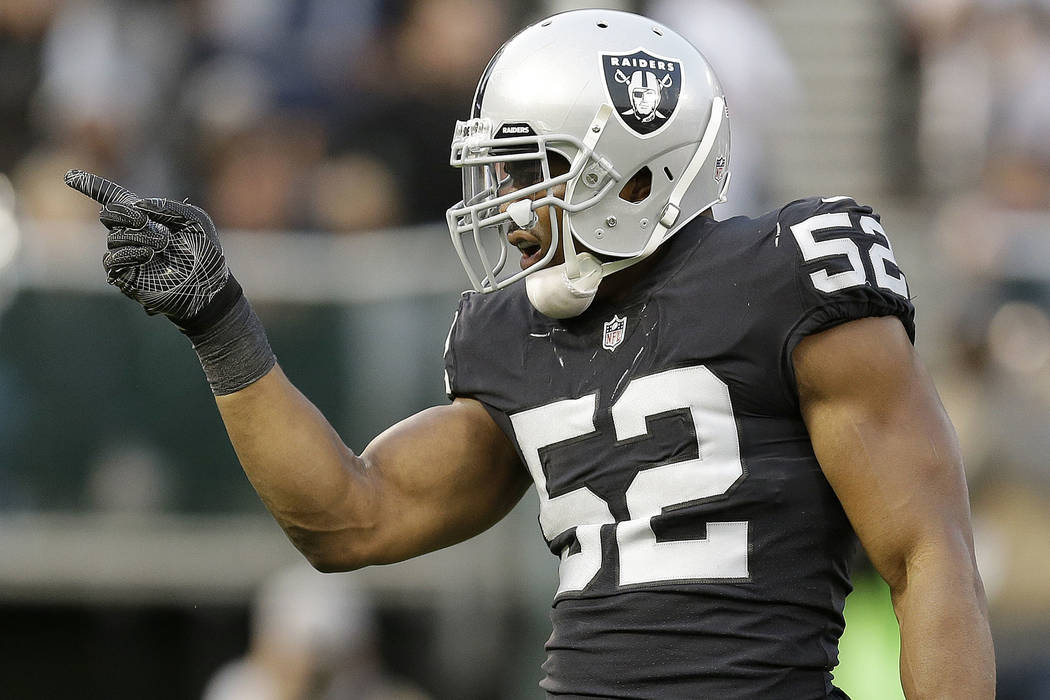 Most believe you shouldn’t look back to move forward, and perhaps that’s shrewd counsel for the Raiders as another NFL season arrives.

It’s one thing not to realize your potential.

It’s another when misfortune won’t allow it.

How far the Raiders might have advanced in the 2016 playoffs was all but determined before the postseason began, when on a Christmas Eve afternoon game against the Colts in Oakland, quarterback Derek Carr was sacked.

The Raiders would fall short of winning a division title, make the playoffs as a wild card, start a rookie quarterback in Connor Cook at Houston and predictably be eliminated, because they weren’t good enough defensively to stop people while hoping an offense sputtering without its leader could outscore the Texans.

Which is another way of saying that whoever first uttered that phrase about hope springs eternal sure didn’t know anything about losing your most important player at an NFL season’s most critical time.

Think about it: In those 15 games Carr started last season, the Raiders averaged 28.2 points.

In the two he didn’t play, they averaged 10.

So it goes that not much has changed for the Raiders, meaning the team picked to win the AFC West this year and among those getting substantial action at sports books as a Super Bowl favorite can’t again afford any significant injury to the guy who in June was awarded a five-year, $125 million contract extension.

Carr was beyond impressive in those preseason snaps he was afforded the last month, completing 20-of-26 for 244 yards with four touchdowns and one interception. He has never looked better in an offense that could be as explosive as the league knows. It added Marshawn Lynch at running back to rumble behind one of the NFL’s best lines, and wide receiver Amari Cooper has produced two 1,000-yard seasons to begin his pro career.

Translation: These guys could be scarier with the ball than some weekly costumes in the Black Hole.

“We’re more comfortable as (an offense),” Carr said. “We play faster. When you keep some words the same, when guys can speak the same language over and over again, it puts ease in peoples’ minds so they can go out and play fast. There is less thinking involved.”

Here’s the issue: While his backup this season has played 28 NFL games with 17 starts over four seasons in Buffalo and owns the experience Cook lacked when he became the first player in league history to make his first career start in a playoff game, EJ Manuel still isn’t Carr.

For this, it’s uncertain Manuel would be capable of playing at a high enough level to overcome what continues to be concerns elsewhere.

Yeah, over on the other side.

If the Raiders are going to validate and even improve on their 12-4 record of last season, they have to produce more stops weekly.

They drafted defense with the idea of shoring up things, wanting to be far better than a unit that last season was second worst against the pass and by far the worst against pass plays over 20 yards.

But two rookies who were taken with thoughts of making things better in those areas — cornerback Gareon Conley and safety Obi Melifonwu — missed significant portions of training camp with injuries. Neither has the preseason experience you would hope for first-year players wanting to make immediate impacts. Indeed, Melifonwu’s status for Sunday’s season-opener at Tennessee and beyond appears in jeopardy after he underwent knee surgery recently.

The Raiders still need help at linebacker. Defensive player of the year Khalil Mack remains one of the league’s most effective edge rushers, and the interior play shined this preseason. But you’re still talking about a defense that allowed an average of 24.1 points.

They bent a whole heck of a lot last season, and sometimes altogether broke.

“We want to win and we want to shut teams down and we want to do all the things that it takes to be a really good defense,” said Raiders defensive coordinator Ken Norton Jr. “We really like the direction we’re going.”

They don’t need to look back to move forward.

They just need to defend better than last season and hope when a block is missed up front and the other guys get to Carr, the worst result is a sack and nothing more ominous.

That’s how you validate 12-4 and perhaps live longer when the playoffs arrive.

That’s how you allow a lot of future Super Bowl betting tickets on your team to cash.