They are the yin and yang of Southern Methodist football. Or, if you were a fan of old cartoons, they are Snidely Whiplash and Dudley Do-Right.

Ron Meyer, UNLV’s head coach when the Rebels were good in football, should have been cast wearing a black top hat, cape and handlebar mustache.

Colorful and more brash than a melodrama archvillain, Meyer was mostly responsible for signing SMU’s  "Pony Express" backfield of Eric Dickerson and Craig James. He was partly responsible for the Mustangs football program receiving the NCAA’s "death penalty" in 1987, after he saw the handwriting on the wall and was coaching in the pros.

June Jones, Hawaii’s coach when the Warriors busted the Bowl Championship Series by playing in the 2008 Sugar Bowl (a loss to Georgia), should have been cast wearing a Royal Canadian Mounted Police uniform with a dimple in his chin.

After SMU received the death blow — a compelling documentary about the scandal called "Pony Excess" aired on ESPN on Saturday night — the Mustangs had enjoyed just one winning season in 20 since the program was reinstated. They’ve had two straight winning seasons under Jones, producing SMU’s first bowl bids since 1984.

Former Las Vegan Jeff Reinebold coached under both Meyer and Jones. Reinebold was Meyer’s secondary and special teams coach — and chauffeur to and from the practice field — during the Las Vegas Posse’s only Canadian Football League season in 1994; he followed Jones from Hawaii to SMU, coaches the Mustangs wide receivers and has acquired a reputation as a top-notch recruiter despite having never made a $100 handshake.

"I love both of ’em, I really do," Reinebold said from the recruiting trail in Baton Rouge, La., on Monday.

Meyer had gobs of charisma. He was the life of the party, the life of any party, and back in those days, there were a lot of ’em.

Jones would have been the one cleaning up afterward, putting the artsy-fartsy egg back on the mantle, putting the lamp shade back in place after Meyer had worn it as a hat.

Reinebold, a 53-year-old free spirit and father of seven who does a great Meyer impression, said his former boss spoke often of the SMU dynasty. Meyer was proud of the program, loved the school, loved Dallas, loved everything about Dallas, including J.R. Ewing. Heck, for a few years there, he was bigger than J.R. Ewing. The straight-shooting Meyer never distanced himself from SMU, for better or worse.

Jones has reached out to Meyer, reached out to Dickerson and the other Mustangs stalwarts of that era. Meyer even attended an official SMU charity function at Jones’ request. He wouldn’t speak, but at least he was there.

To use Reinebold’s analogy, the death penalty was a scab that wouldn’t stop bleeding because everybody kept picking at it. The program’s dignity has been restored under Jones. The scar remains, but the bleeding has stopped.

"When we beat (Texas-El Paso) last year to become bowl eligible, fans stormed the field, and they didn’t know how to do it," Reinebold said. "There were some older gentlemen in their 70s who came down, tears streaming down their faces. They said they never thought they would live long enough to see the day."

Reinebold, who has been more places than Johnny Cash in that "I’ve Been Everywhere" song, was part of championship teams at Dartmouth and Penn and won a World Bowl in NFL Europe with the Amsterdam Admirals. While ivy-covered halls and Dutch coffeehouses are pretty hip, nothing compares to seeing those old Mustangs cry.

"To see those guys proud of their school again, proud of the program … you don’t get very many chances in your life to resurrect a program that was as proud as this one was," said Reinebold, who has had to overcome adversity of his own.

A sore on his stomach that wouldn’t go away last winter was diagnosed as a malignant melanoma — skin cancer. He’s beating it so far, with a little inspiration from Warren Zevon, the late singer-songwriter. "Enjoy every sandwich," Reinebold says.

What an interesting life: Ron Meyer on one end, June Jones on the other. Warren Zevon somewhere in the middle, but not exactly in the middle. Because as Reinebold said, anybody who speaks in his lyrics of cattle having brucellosis is never that close to the middle.

On the phone line, I could hear the traffic in Baton Rouge slowing down. Either Jeff Reinebold was making his final approach to speak to another three-star recruit or that guy from the Dos Equis commercial had broken down on the side of the road and needed a ride.

Las Vegas Review-Journal columnist Ron Kantowski can be reached at rkantowski@reviewjournal.com or 702-383-0352. 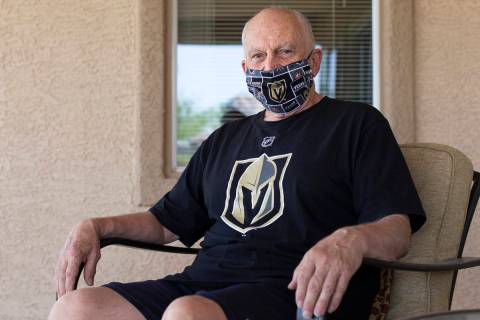