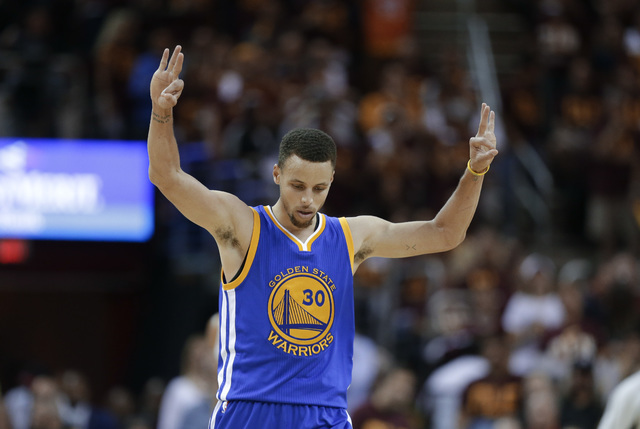 Golden State Warriors guard Stephen Curry celebrates a basket against the Cleveland Cavaliers during the second half of Game 4 of basketball's NBA Finals in Cleveland, Friday, June 10, 2016. (Tony Dejak/AP)

Golden State Warriors guard Stephen Curry’s father-in-law was nearly arrested when he was mistaken for a fake-credential con artist at Game 6 of the NBA Finals against the Cleveland Cavaliers.

A league official told ESPN’s The Undefeated that NBA security was on alert during Game 6 on Thursday night to find David Aminzadeh, who previously had sneaked in to many major sporting events. Quicken Loans Arena security officials checked the credentials of the father of Curry’s wife, Ayesha, because they thought he looked like Aminzadeh, before determining they were mistaken. Aminzadeh was never spotted at the game.

Curry was briefed by an NBA official about the situation with his father-in-law after he spoke to the media following the Warriors’ 115-101 loss to the Cavs in Game 6.

“I was just kind of debriefed on what the security thought happened with some guy that poses with fake credentials and gets backstage at a lot of events, the NBA Finals and all that stuff,” Curry told The Undefeated as he departed from the arena. “They kind of profiled my father-in-law and thought he was him. They threatened to arrest him before they checked out his credentials. It’s kind of been an emotional and tough night all the way around.

“That was kind of a traumatic situation where her (Ayesha’s) dad almost got arrested. So it was kind of a tough situation to deal with in a hostile environment. All in all, it’s just a game. I hope that everybody is all right.”

Curry was ejected in the fourth quarter after he picked up his sixth foul and then tossed his mouthpiece that hit Andrew Forbes, son of Cavaliers minority owner Nate Forbes. The two-time NBA MVP apologized and shook Andrew Forbes’ hand before departing the floor.

Curry scored 30 points in the loss, which pushed the NBA Finals to a deciding Game 7 on Sunday night in Oakland, Calif.

Ayesha Curry tweeted after the Warriors’ loss that her father was racially profiled.

Police racial profiled my father and told him to remove credentials and tried to arrest him. It's been a long night for me. I apologize:

“Police racial profiled my father and told him to remove credentials and tried to arrest him. It’s been a long night for me. I apologize,” she wrote on Twitter.

Ayesha Curry also tweeted after her husband’s ejection that Game 6 was “absolutely rigged for money” or “ratings.” She later deleted the tweet, saying it was posted “in the heat of the moment.”

Here's what Ayesha Curry posted at the end of the game…then deleted, but only after tens of thousands of retweets: pic.twitter.com/dO83u456iX