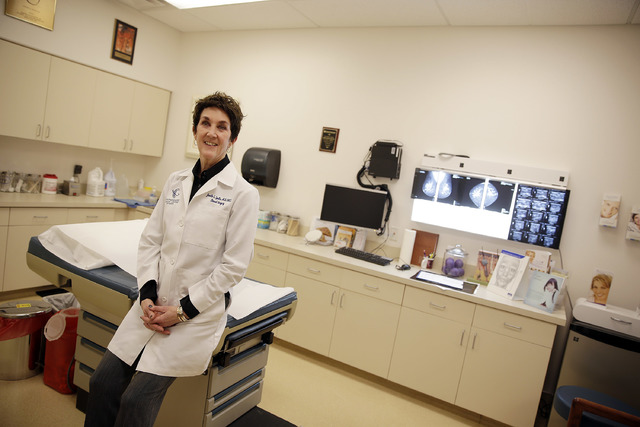 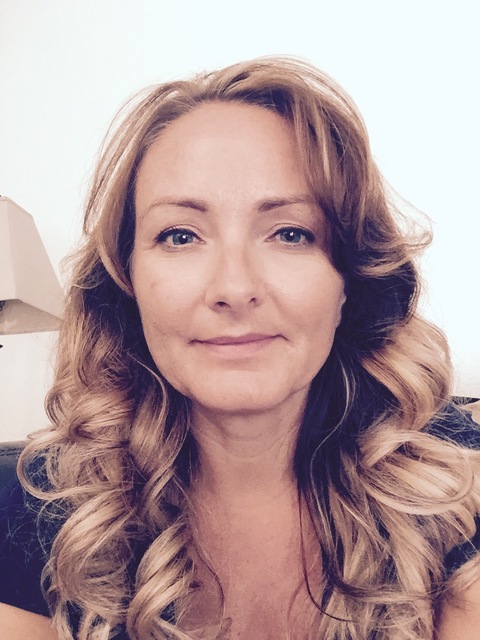 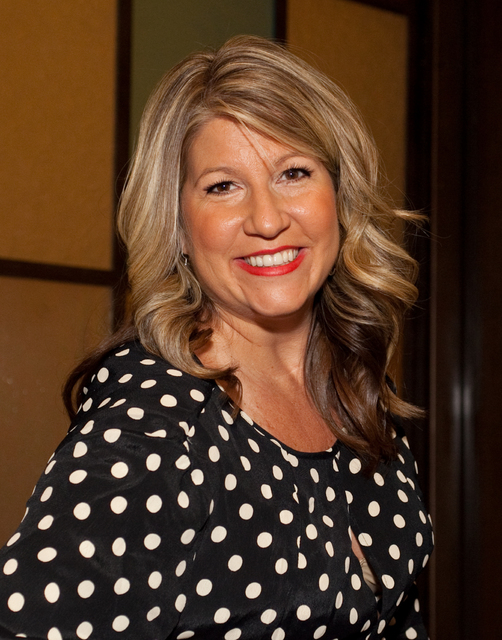 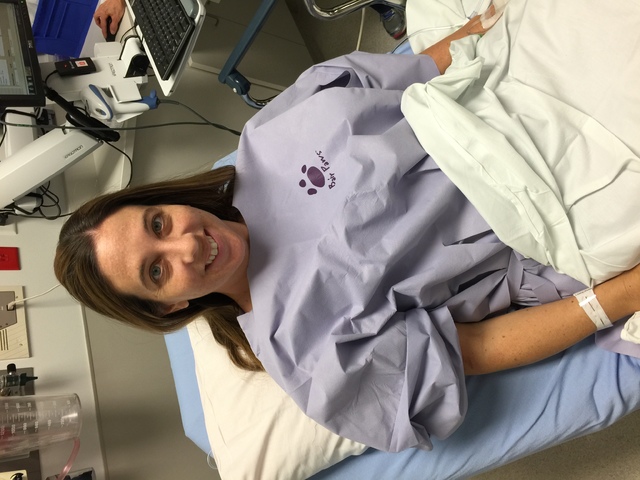 The recent news that women could hold off on their annual mammogram until age 50 didn’t sit well with many, particularly those who had been diagnosed at a young age and saved by their preventative mammogram.

The U.S. Preventive Services Task Force mammogram guidelines recommend women begin screening at age 50. The American Cancer Society agrees, with a stipulation that if you have a family history of breast cancer or feel you need an exam, there is no reason not to get an annual mammogram after age 40.

“I would be dead if I followed those instructions,” Carrie Yurek, a recent breast cancer survivor, said. “That was astonishing to me.”

On her own accord, Yurek began annual mammograms on her 40th birthday.

“Several years ago, my mom had some precancerous cells, and it turned out to be nothing that needed treatment, but it motivated me that when I turned 40, I was going to make sure and be proactive and get my mammograms,” she said.

On May 23, after her third annual mammogram, a small tumor was found.

“I was shocked,” the mother of three boys said. “I didn’t feel anything, and they were glad they found it so early.”

She qualified for genetic testing and decided that a bilateral mastectomy was her best option.

“I didn’t want to worry about a reoccurrence, even though they said it was so small,” Yurek said. “I wanted to be healthy for as long as possible.”

The surgeon went in to remove the tumor, which measured less than a centimeter, but found a 4.5 centimeter mass that had spread to a lymph node.

“Had I waited until I was 50, like they suggest now, I wouldn’t be alive today,” she said.

She is on a regimen of Tamoxifen and started radiation last month. She still has two surgeries to complete the breast reconstruction and has also opted to have her ovaries removed.

“The interesting part of deciding to have the mastectomy and the reconstruction at the same time is that it saved me a lot of future surgeries,” she said. “The limit in size for a lumpectomy was 4 centimeters. If I had chosen a lumpectomy, the surgeon would have had to take the whole breast anyway once they found the mass, and the plastic surgeon wouldn’t have been there. It would have been a much different outcome for me.”

The diagnosis has changed her.

“My life will not be the same,” she said. “I will live, I will survive, but there are parts of me that will never be the same. But I got to decide; that’s a good thing of all this. I’ve had three kids, breastfed all three, and so my boobs weren’t that great as it was. So I get a whole new set now. That’s my positive spin on it.”

The new edict on the former guidelines has been a concern for many women, either those with a family history of breast cancer and those who simply want the peace of mind, said Josette Spotts, a breast surgeon at Comprehensive Cancer Centers of Nevada.

“It’s still relatively new,” she said. “They felt it was based on the fact that they were finding breast cancer goes up as you enter menopause, and that mammograms weren’t necessarily saving lives. They looked at a lot of numbers and did a lot of research.”

The new findings were based on extensive studies of women between the ages of 45 to 49 and then 50 to 54.

“They found the risk of dying of breast cancer was the same, and it was worthwhile doing annual mammograms in those age groups,” Dr. Spotts explained. “They then looked at women after the age of 54 and mortality was not as high, therefore they decided it was worthwhile to get a mammogram every two years after age 55.”

The recommendations were put forward by the U.S. Preventive Services Task Force in 2009, with the American Cancer Society only recently agreeing with those recommendations, causing a stir among breast cancer survivors and physicians.

“They are not saying that’s what you have to do, but based on statistics the highest risk for breast cancer is between the ages of 45 and 54 and those would be the most that would benefit from mammograms annually,” Spotts said.

Most cancers found after menopause are also less aggressive.

“As a breast surgeon, I tell patients that I don’t agree with those recommendations, and if you can get a mammogram, particularly if you have any family history of cancer, then get the mammogram,” Spotts said. “It’s not that difficult and it can save your life.”

There also are much better-quality mammograms available today than in the past decade.

“The visual mammogram has seen marked improvement over analog mammograms, and incredible advancement,” she said. “They can pick up calcification better.”

A relatively new technology has made it to Las Vegas, 3-D mammography, which can show lesions, particularly in dense breasts, at a better rate than traditional visual mammography. However there is a drawback.

“There is still a learning curve on 3-D,” Spotts said. “We are finding smaller, more difficult lesions in dense breasts. But everybody is doing digital mammography with two views of the breast.”

“The 3-D is actually software where we are able to take that picture and slice it into 100th slices a millimeter apart,” she said. “You’ll get less calls back to come in and check your results, but it’s not happening yet. We are new to this.”

Kindergarten teacher Amanda Keehu is still reeling from a surprise diagnosis that came well after her mammogram in March. She was called back after the radiologist found “something a little dense,” she said.

She went in for a second mammogram and then an ultrasound and finally a biopsy.

Within a day of the biopsy on April 28, she was told she had stage 1 breast cancer and a lump that was 1.2 centimeters in size.

She had a double mastectomy June 17.

“I was well taken care of by my surgeon at Comprehensive Cancer Centers,” she said. “If I hadn’t had the mammogram, if I had waited 10 more years, I would have to have done chemotherapy, radiation. But because we caught it so early, and they were able to do the reconstruction, I can move on more quickly and get back to my life.”

The decision for the double mastectomy was surprisingly easy.

“For me, it was a pretty simple decision,” said Keehu, who has worked for the Clark County School District for 16 years. “It’s either my health or my life, being here for my kids and worrying about a chance of reoccurrence. I’d rather be healthy for my children and grandbaby on the way.”

She recommends that people gather a positive support system around them if they are ever diagnosed with breast cancer.

“And stay off the blogs and the internet,” Keehu said. “I knew I was in good hands with my doctors, and I had friends and family that helped me to stay positive and know we were going to get through this.”

This experience has solidified her belief in preventative health care.

“It’s just like going to the dentist,” she said. “You are going to pay less in the end if you are doing the preventive care. It should be the same with our mammograms. In the end, it will cost less to treat me now than if we catch it later.”

Putting an annual mammogram on the calendar early can save your life.

A healthy 40-year-year old in 2010, Schwartz signed up to get her mammogram, just as she did for her flu shot and other preventative medical measures.

“My mom is a nurse, so we follow medical protocol in my family,” Schwartz said. “To say the very least I was shocked by the diagnosis.”

She had to do two mammograms, an ultrasound and biopsy before the cancer was confirmed.

“I was extremely upset, devastated by the news,” she said. The young professional decided on a mastectomy to ensure her future health.

“It was like a yard sale; they took everything,” Schwartz said.

Her mother helped her through the ordeal.

“Thank God she was there,” Schwartz said. “It was not a happy time. I have no idea what I would have done without her.”

Now cancer free, she has a few choice words for those who ask.

“I tell this to people who are newly going through this, ‘It sucks, it is a hideous process, a big pain in the ass,’ ” she said. “But now I look back at it, 7 years, and I have great (breast) reconstruction. I find myself to be fortunate.”

And she can’t stress enough the importance of early testing.

“It takes 15 minutes,” Schwartz said. “Anybody can do anything for 15 minutes.”