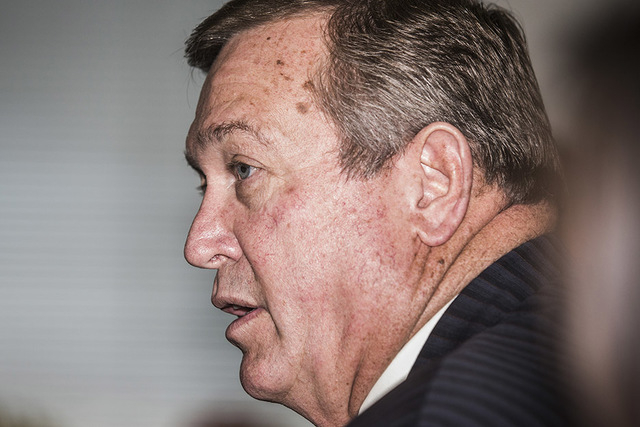 WASHINGTON — Rep. Cresent Hardy, whose finances have been complicated by business setbacks and a transition into politics, holds more than $1.8 million in personal assets but also faces a potential major debt, according to a report he filed with Congress in July.

The Nevada Republican’s holdings include joint ownership of properties in Alaska and Utah where he and partners hunt and camp, and a partnership of small properties in and around Mesquite in which he holds a 25 percent interest.

Apart from his annual congressional salary of $174,000, Hardy also is collecting a monthly check from former business partner Scott Bulloch. The Mesquite businessman bought out Hardy’s interest in their construction company and associated assets in 2013 and is paying over nine years on a $1.04 million promissory note, according to the report filed in mid-July with the House.

He also received a payment of more than $5,000 last year from a family friend. Aides said it was for helping build a block wall on the man’s property in Mesquite.

Peri Hardy also draws a small income of between $1,000 and $2,500 annually from a part interest in a limited liability investment company called Obsidian Holdings that is a vessel for a variety of liquid investments and real estate. Hardy’s office was unable to provide details on that investment.

Hardy, from Mesquite, was elected to Congress in November 2014 after serving in the Assembly and after holding a number of civic positions in the community where his family dates back generations.

His finances have been complicated by business struggles through the recession and by his transition from construction company owner to public official.

Hardy sold his part of Legacy Construction and Development Inc. to Bulloch in 2013. The company declared Chapter 11 bankruptcy a year earlier listing 73 creditors owed more than $8.1 million. The declaration enabled the company to remain in business, reorganize and pay its bills over time overseen by a trustee.

Hardy also faces a potential financial hit of between $1 million and $5 million stemming from the 2012 short sale of Falcon Ridge Golf Course in Mesquite to Utah investors.

Hardy and Bulloch bought the course in 2004 and added a two-story clubhouse. But the venture struggled through the recession and was put in bank receivership before being sold.

According to Hardy’s disclosure, he signed a joint confession of judgment-default of business debt in 2012 making him or Bulloch or both potentially liable for followup collection by their lender, American Bank of the North. The bank has not acted on the judgment, according to Hardy’s spokesman.

Among his remaining assets, Hardy and six friends who formed a partnership called the Mesquite Magnificent 7 LLC own interests in land on Prince Wales Island in Alaska, according to the filing. Hardy’s interest in the recreational real estate is worth between $15,000 and $50,000

Additionally, Hardy is joint owner of land at Panguitch Lake in Garfield County in south-central Utah, with his stake valued at between $50,000 and $100,000.

The financial reports that lawmakers file with Congress each year cover their assets and liabilities, but not the value of their personal homes. Also, filers are allowed to value their holdings in broad ranges that allow for only a general sense of their financial health.