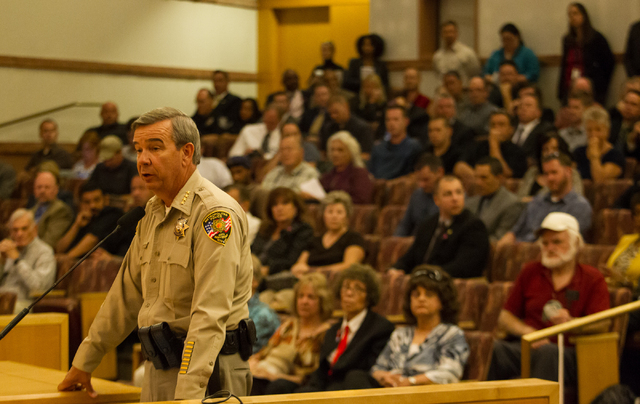 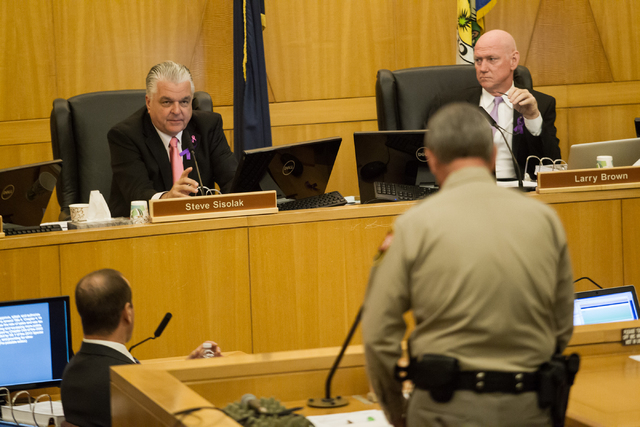 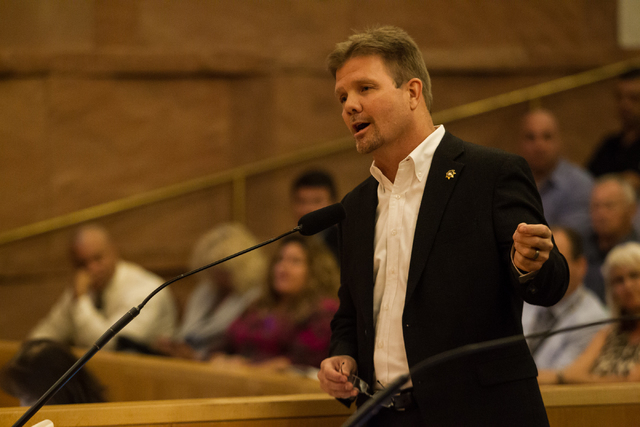 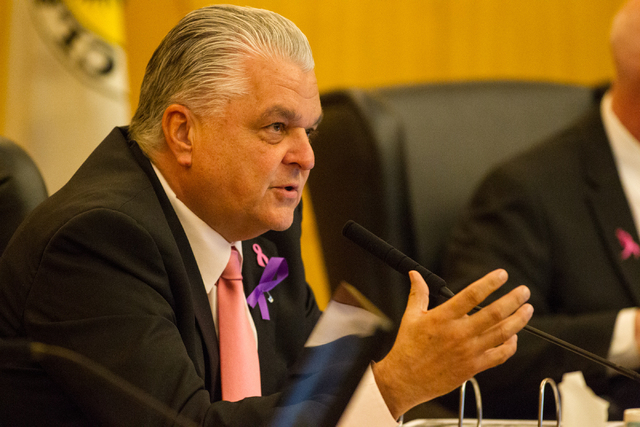 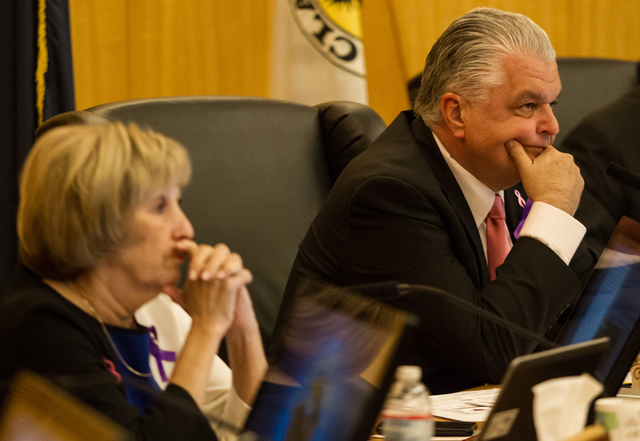 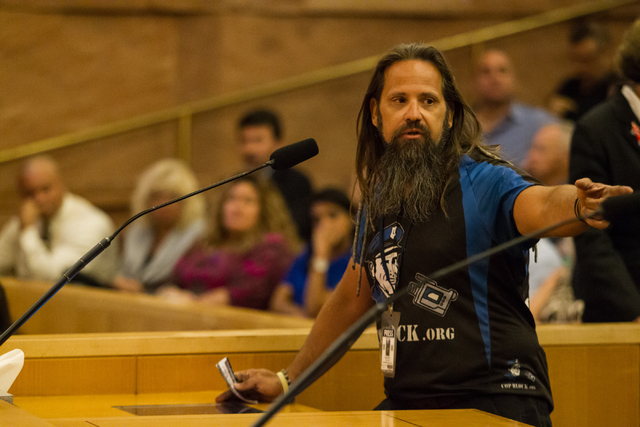 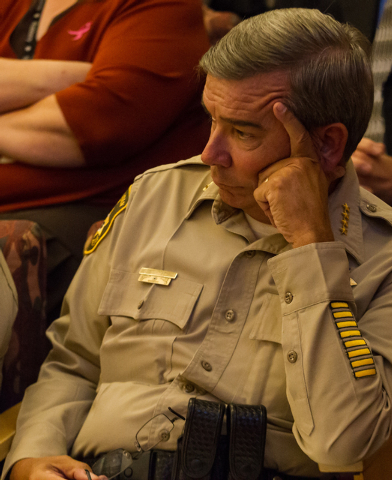 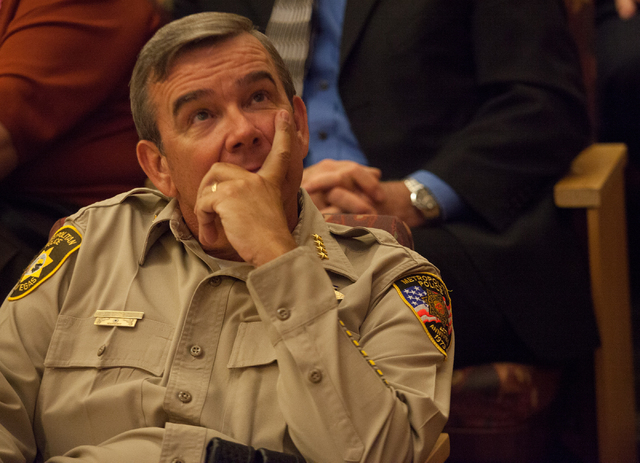 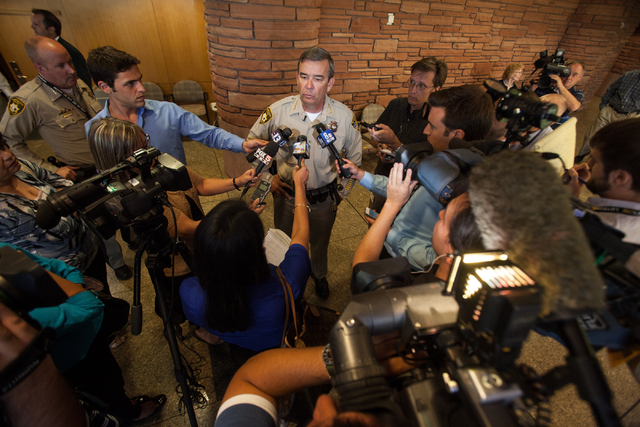 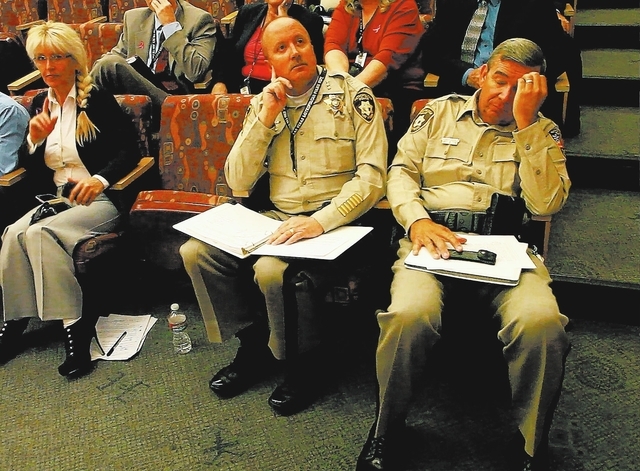 The decisions were a blow for Sheriff Doug Gillespie, who had lobbied lawmakers and county commissioners to support a sales tax increase for the Metropolitan Police Department and, to a smaller degree, the police departments of Mesquite, Henderson, North Las Vegas and Boulder City.

Calling what happened “inaction,” Gillespie said: “Make no mistake. I’ll be heading back to my office and I’m going to work very, very hard with everyone in my organization as well as all of law enforcement here in Southern Nevada to continue to provide you a safe place to live and work. But this decision in here today does not help me.”

Both measures fell short of the five votes needed for passage.

Collins tried to sell his colleagues instead on the 0.15-percentage-point increase, saying that was the full amount authorized by the Legislature. That proposal got even less support. Besides Collins, Brown and Weekly supported the increase; all other commissioners voted against it.

They cast votes after more than an hour of testimony from the public that included opponents and supporters.

Gina Greisen, an opponent, said the public needs more time to get questions answered. She also said it may not be the best time, given that Gillespie isn’t seeking re-election and will leave the office after the 2014 election.

“With all due respect to the sheriff — because I think he’s a nice man — we’ve got a lame duck sheriff,” she said.

But Terry Murphy, president of the Downtown Las Vegas Alliance, encouraged commissioners to support the increase.

“We want our residents and our tourists to feel safe when they come downtown,” Murphy said.

The sales tax proposals’ roots date back to 2004, when county residents approved an advisory vote supporting a 0.50-percentage-point increase in the sales tax rate for more officers. “More Cops” began after lawmakers in 2005 allowed the county to put half that sales tax increase in place, a 0.25 percentage-point, or quarter-cent, increase.

Under the state law, commissioners can reconsider the More Cops sales tax until July 1, 2016. Collins said he is open to discussing the issue more.

“Hopefully, we can get something done quickly,” he said.

On Tuesday, Gillespie encouraged commissioners to go with the larger of the two proposals, saying it’s needed to cover a $30 million budget shortfall and hire another 100 officers.

For commissioners, the debate wasn’t as simple as whether to raise the sales tax and have more cops. Some commissioners pushed instead for Gillespie to partially patch his shortfall with money from his existing More Cops account, which has about $124 million.

Gillespie has resisted that, saying he still needs money in the account when the tax sunsets in 2025. Officers hired with More Cops money since 2005 will still be on the job in 2025, he said. About 520 Las Vegas police officers are covered by that fund.

Brager had pushed for the smaller tax increase, while also asking the sheriff to dip into the account and contribute $15 million toward the shortfall.

That account will have $26 million left in 2025. Under her scenario, all of the smaller tax increase revenues would have gone toward hiring about 125 officers.

“My goal is to give you something, not nothing,” Brager told the sheriff before commissioners voted.

With other recent increases, including fuel taxes and water bills, he said: “It’s a little here, a little there that’s really affecting people.”

Sisolak also asked about an arbitrator’s decision last week in a case between the Metropolitan Police Department and the police union. The ruling by arbitrator Robert Perkovich gave Las Vegas police officers 1.50 percent in total wage increases between July and January 2014.

Sisolak questioned why the decision didn’t have a fiscal impact statement or an explanation of the reasoning, which is contrary to state law.

“I don’t know why the gentleman wouldn’t write it to the letter of the law,” Gillespie responded.

He had his allies on the commission. Brown, for example, said it’s important to look beyond the department’s controversial officer-involved shootings and a much-publicized helicopter ride for a rock musician. For every one of those cases, he said, there are plenty of unpublicized good deeds.

“I’m supporting anything that will get more resources to Metro,” Brown said.

Collins, who voted against the pared-down sales tax hike but in favor of the larger one, told reporters he made his call to go all or nothing based on principle.

The full 0.15-percentage-point increase is needed, including for departments in Henderson, North Las Vegas, Mesquite and Boulder City, Collins said.

Giunchigliani said it’s now a good time to look at the department’s budget and give the public a chance to look at all the associated issues, including how resources are deployed.

For now, it is unclear how the shortfall will impact the police department when the next fiscal year starts in July 2014.

But Gillespie said after the meeting that layoffs aren’t planned.

“ ‘Layoff’ is not in my vocabulary,” he said. “I’m going to continue to work as long as I’m sheriff here not to lay anybody off. A lot of people don’t know this about Doug Gillespie; but I came here over 33 years ago to commit myself to a career in law enforcement, and a year or so after I joined this organization, we ran into some real tough economic times. I know what it’s like as a police officer to sit in a briefing room and not know if you’re going to have a job.”