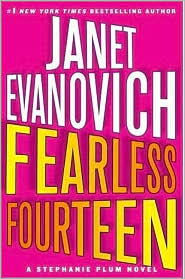 New Jersey bounty hunter Stephanie Plum has mastered the art of channeling Lucille Ball.
"Fearless Fourteen" by Janet Evanovich is crammed with the kind of improbable, zany situations that had viewers during the golden era of television rolling on the floor.
There’s a hair-humping monkey named Carl.
An aging pop star named Brenda desperate for her own reality show.
A teen gamer called Zook who bears a strong and disturbing resemblance to Joe Morelli, Stephanie’s longtime love interest.
Throw in a random stalker, a $9 million bank robbery and a hunt to find a missing woman and you have all the ingredients for a madcap adventure made for summer reading.
And I forgot to mention the exploding briefcase. It’s not a Plum adventure unless something explodes.
Stephanie Plum has long been among my favorite June book releases, and I have no regrets about purchasing it in hardback. That said, "Fearless Fourteen" lacks the sparkle of Evanovich’s best work (my favorite remains "Four to Score") and sometimes feels as if the author is writing from a checklist instead of plotting the novel.
The device I hate most in a mystery novel — the villain who appears out of nowhere to take the fall — is used here. It’s also missing meaningful time with Ranger, the other man in Stephanie’s Trenton triangle.
While this book has a lot of chuckles, it’s missing the masterful humor Evanovich usually excels at. That’s a shame, because that’s what usually lifts the characters on the page and gives them dimension. Even Grandma Mazur’s newly developed identity as an online gamer falls a little flat.
Read it, enjoy it and cross your fingers that Plum’s outing in next year’s installment doesn’t just run the bases.