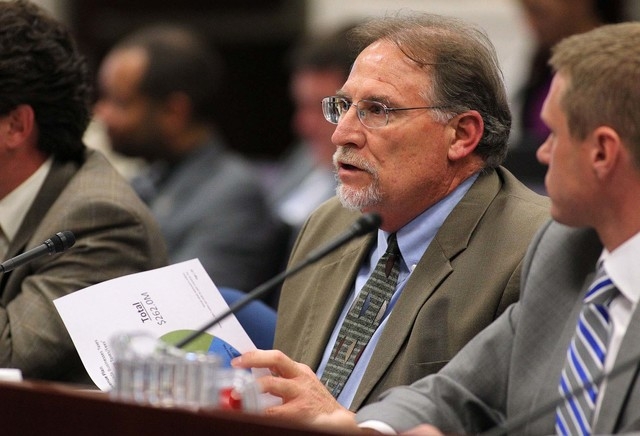 CARSON CITY — A compromise tax plan Gov. Brian Sandoval is counting on to raise $262 million a year and help fund his $7.4 billion budget received a guarded, somewhat tepid reception Thursday from a panel of lawmakers.

With less than two weeks remaining in the 2015 session, it’s do-or-die time for legislators to approve a plan or go back to the drawing board — and likely face a special session.

“We still believe and desire that our plan going forward will be broad based in nature, have stability to grow the economy, be fair and be a fundamental restructuring” of Nevada’s tax system, Mike Willden, Sandoval’s chief of staff, told members of the Senate Finance and Assembly Ways and Means committees.

The panels are considering the tax plan as an amendment to Assembly Bill 464.

“We believe there’s a need to capture revenue from out-of -state corporations that do significant business in this state … use our resources but do not contribute to our economy.”

Jeremy Aguero, an economic analyst advising the governor’s office, said many large corporations skate from paying business taxes because they do not have employees in Nevada.

“Some of them are doing millions if not billions of activity in our state,” he said.

Money committees have already closed agency budgets. Legislators now face a June 1 deadline to figure out how to pay for them.

The commerce tax is similar to Sandoval’s original proposal to overhaul the state’s business license fees, tying tax rates to gross receipts and with varying rates to account for different industry types.

The commerce tax would exempt the first $3.5 million in revenue. Additionally, businesses would be able to deduct 50 percent of that tax paid as credit against modified business tax liabilities.

Administration officials Wednesday said given the $3.5 million threshold, only the largest of businesses — roughly 10,000 — would actually pay it.

The rate for Nevada’s modified business tax, or MBT, would rise to 1.475 percent for general businesses, up from the existing rate of 1.17 percent. Mining and financial institutions would pay a rate of 2 percent. Additionally the current exemption of the first $340,000 in annual payroll would be cut to $200,000, meaning more businesses would be subject to the levy that is assessed on payroll. Employers would retain a deduction for employer-paid health care expenses.

Annual business license fees would increase to $300 annually for most businesses, and to $500 for corporations.

It is the commerce tax provision that is causing the most heartburn. Some lawmakers and tax critics argue the gross receipts aspect too closely resembles a business margins tax proposal that was overwhelmingly defeated on the November ballot.

The new plan would impose rates ranging from 0.051 percent on the mining industry to 0.331 percent for rail. Accommodations would be taxed at 0.2 percent; food service at 0.194 percent; and publishing at 0.253 percent.

Assemblyman Pat Hickey, R-Reno, questioned whether varying rates would cause ongoing headaches. He said he feared industries would come back to the Legislature every two years to get “reclassified.”

“Is that a complicated problem for us down the road?” Hickey said.

Aguero responded, “Is that going to happen? Yes.”

Derek Armstrong, chairman of the Assembly Taxation Committee, questioned whether the governor’s plan expands Nevada’s tax base as advertised.

“If this is the way we broaden the base, I think we’re missing the bigger picture of what this session is about,” he said.

Any tax plan requires a two-thirds majority to pass — 28 votes in the Assembly and 14 in the Senate.

The Assembly, where a core of about 12 Republican conservatives have pledged to oppose any taxes, presents the biggest hurdle.

Republicans hold a 25-17 majority. If all members of the Democratic caucus ultimately support the plan, Sandoval would need 11 GOP votes to secure passage.

No action was taken by the committee, and Assembly Majority Leader Paul Anderson, R-Las Vegas, said another hearing will be held for public testimony and continued scrutiny.