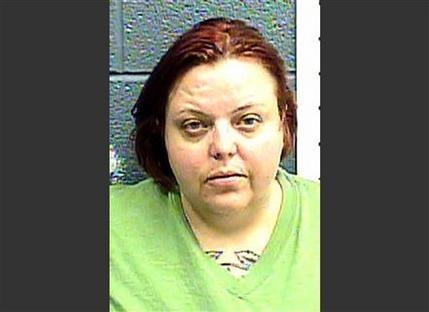 LAS CRUCES, N.M. — A New Mexico woman pleaded guilty Monday to locking her 8-year-old niece with developmental disabilities in a wooden cage and leaving her alone while she left to watch a movie.

A teary-eyed Patriarchias told 3rd Judicial District Judge Fernando Macias in Las Cruces that the incident was “the biggest and worst mistake of my life.”

She faces a maximum of six years in prison, but her attorney asked for a deferred sentence. Prosecutors are seeking some prison time. Her sentencing has been scheduled for March.

Her attorney, Peter Giovannini, said his client made a mistake.

“The cage is not the issue,” he said. “The issue is a lapse in judgment.”

Police say Patriarchias and her boyfriend, Edmond Gonzales, took her three children to an elementary school in January to watch a movie. Patriarchias’ estranged husband called police when he arrived at the school and learned that the 8-year-old girl was unattended at the mobile home.

Officers discovered a large homemade wooden cage in the corner of a bedroom with the girl inside. The cage had two latches on the door, a baby crib’s mattress inside and was about 2 1/2 feet wide and 4 feet tall, police said in a statement.

Prosecutor Paul Rubino said Monday that Patriarchias “crossed the line” and what started as a modified bed for the child “turned into a prison cell.”

The girl didn’t appear to have any physical injuries, police said.

A police spokesman said Patriarchias had been trying to adopt the girl but hadn’t been able to reach the girl’s birth mother to get her consent at the time she was discovered in a cage. The girl suffers from microcephaly – a condition that gives people an abnormally small head.

Gonzales, who has been in custody since January, also pleaded guilty to negligently permitting child abuse, a third-degree felony. He was sentenced to three years of probation but will remain in custody until another case is resolved.